ValueWalk
Home Business Gold Prices May Reach $1,500 By This Time Next Year 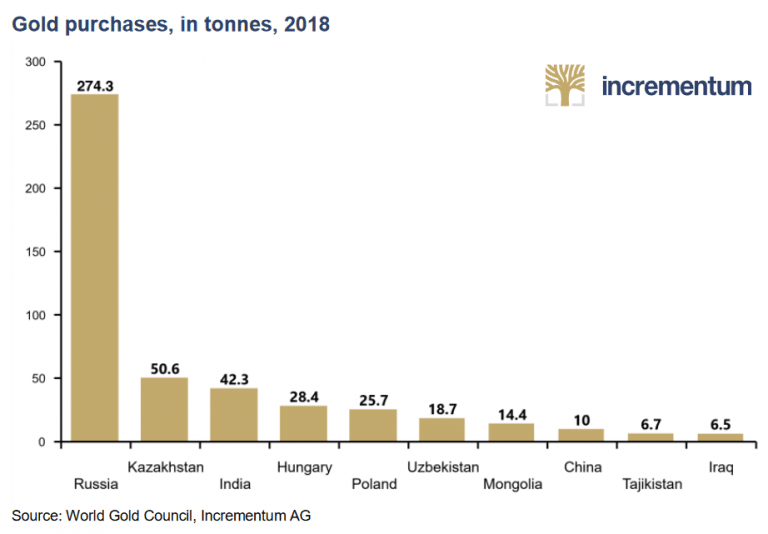 Ever-climbing stock prices have kept a lid on gold prices for most of this year, but that could be about to change. Fund managers from Incrementum believe we have entered the early stages of a new bull market for gold, although they don’t expect an easy path upward.

In their annual “In Gold We Trust” report, Ronald-Peter Stoeferle and Mark J. Valek of Incrementum predict that gold prices could hit $1,500 by next spring—if all the pieces fall into place. They also explained the bullish signals they see and other gold market trends.

One reason some may question their call that the bull market for gold has already started is because stocks can't seem to stop rising. However, they looked below the surface economic data and point to the brewing credit crisis as a sign that things are about to change fast.

They describe gold as "the universal reserve asset to which central banks, investors and private individuals from every corner of the world and of every religion and every class return again and again." They also look forward to a time when "the natural value of this unique precious metal is once again fully appreciated. They argue that the markets have put too much trust in central banks and the U.S. economy, adding that when this trust shifts again, they expect gold to be raised back to "old honors and new heights."

Central banks have been buying gold

Other fund managers and market watchers have pointed out that central banks have been buying gold at rates not seen in many years, and Stoeferle and Valek noted the same thing. They explained that all this gold buying by the world's central banks is a signal that they no longer trust the U.S. dollar-driven status quo. Odey Asset Management said recently that it likes gold due to the demand from central banks.

Russia and China in particular have boosted their gold reserves over the last 10 years, which doesn't come as a major surprise. Other countries which have increased their reserves include India, Kazakhstan and Turkey. Hungary made its first gold purchases since 1986 recently. In fact, central banks bought 657 tons of gold in 2018—the largest amount of gold purchases since 1971 at the end of Bretton Woods. 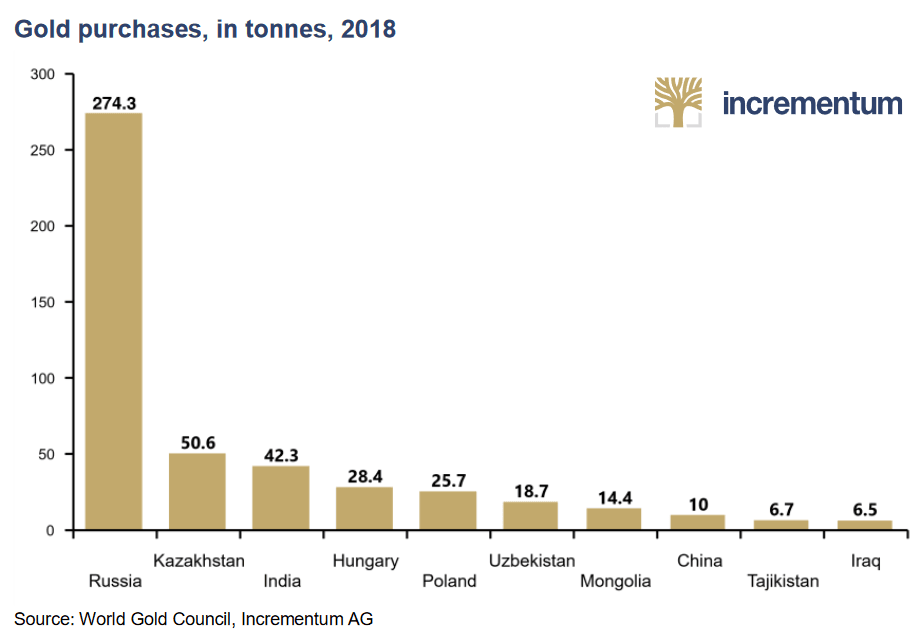 If central banks are losing trust in the U.S. dollar as it seems they are, then it may only be a matter of time before the rest of the market follows suit. 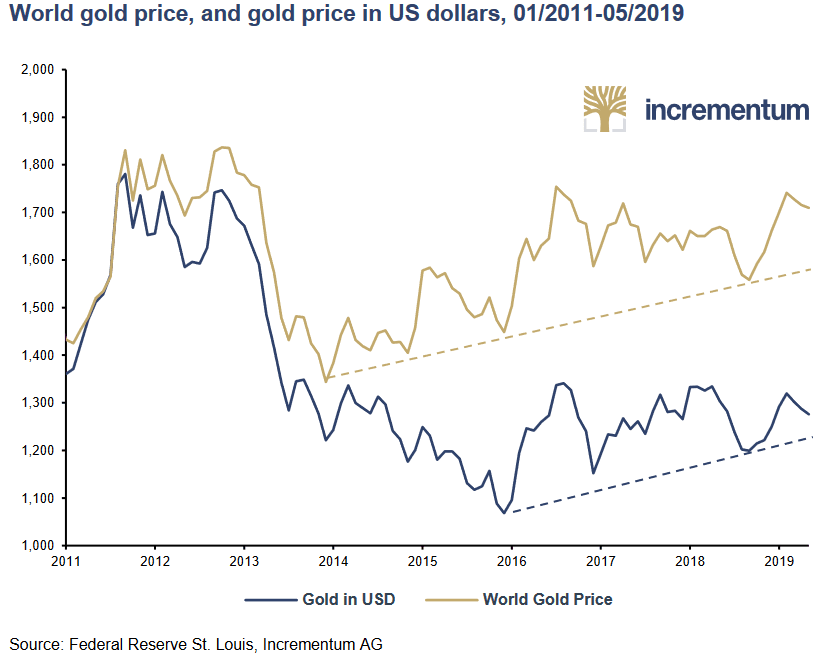 After bottoming out at the end of 2015, the gold price has started a trend of higher lows, which Stoeferle and Valek said confirms their positive view of the yellow metal. When looking at the gold price in other currencies, it posted gains in most other currencies in 2018. Only the allegedly "safe-haven" currencies like the U.S. dollar and Japanese yen saw small losses in gold last year. Even during significant corrections, gold has outperformed almost all other asset classes since 2001, with the average annual performance since then at 9.1%. This year has been a bit difficult for the metal, but they remain convinced that the bull market for gold is in its very early stages. As confidence in the U.S. and its currency wanes, gold's prospect should improve further.

Stoeferle and Valek did say that sentiment on gold right now has been shifting steadily between "disinterest, agony, pessimism and slight confidence." Based on technicals and seasonality, they expect the gold market to remain cool for the next several weeks, but they don't expect a deep correction because they believe there's a lot of interest waiting on the sidelines.

Using the Coppock curve, they showed that gold is giving a buy signal right now, which occurs whenever the indicator turns up below the zero line. 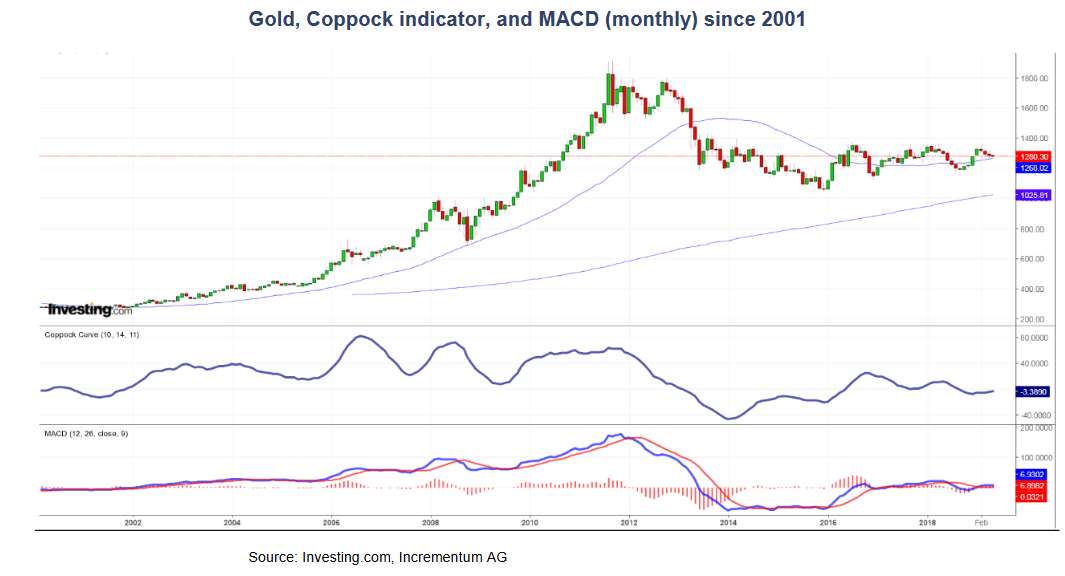 The yellow metal typically bottoms out each summer, so they advise being patient until the low hits. However, if the resistance of $1,360 is surpassed, then their next target is $1,500 an ounce by spring 2020. They also pointed to the formation of a shoulder-head-shoulder pattern since 2013. They believe if the gold price breaks outside the $1,360 to $1,400 resistance range, then the next target would be near $1,800 an ounce based on the distance from the head to the shoulder line. 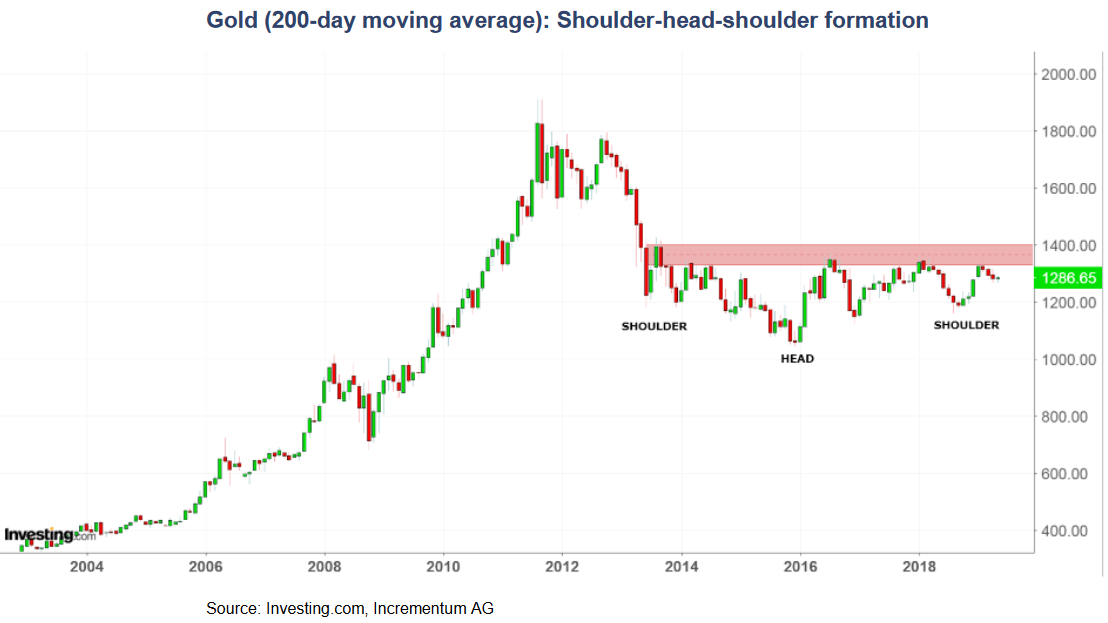 For now, sentiment on gold is simply all over the place. Bloomberg data shows that analyst consensus has no strong opinion about the yellow metal right now. The consensus puts gold at $1,381 in 2022, but Stoeferle and Valek believe such a long sideways move is "extremely unlikely" based on past market behavior.

The gold/ silver ratio can also be used to gauge sentiment for gold because usually the only time silver prices are strong is when gold prices are also rising. They explained that during these periods, investors are looking for higher leverage and end up buying mining stocks or silver. Given that the gold price is still "meandering," they predict that silver won't rise much until gold's next breakout attempt. They add that the gold/ silver ratio is now at 88, which indicates that precious metal sentiment is now "at rock bottom." 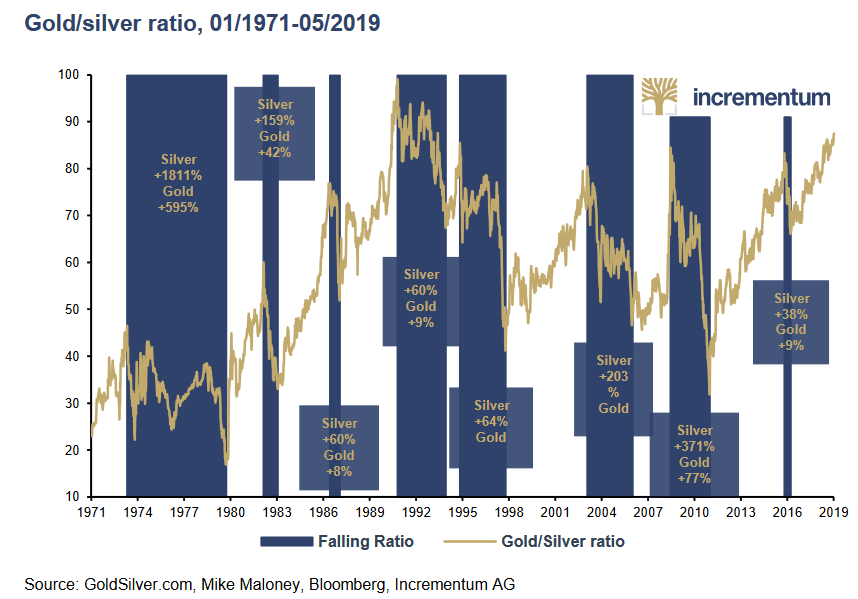 Based on the "Midas Touch Model," gold has been in "bearish mode" since May 20. For now, they expect the ongoing "mild" correction to continue with the gold price finding a bottom between June and mid-August, possibly between $1,200 and $1,250.

"In the bigger picture, this would not violate the series of higher los but rather strengthen the promising ascending bullish triangle formation that gold has seemed to tinker with since its low at USD 1,045," they explained.

Looking at the four individual ratio parts of the Midas Touch Gold Model, they said none is "screamingly bullish" right now. The Dow Jones/ gold ratio is teetering on the edge and about to lose its bullish signal. However, if the "sell in May" cycle and the U.S.-China trade war continue to weigh on stock markets, the Dow Jones/ gold ratio would continue to be bullish for gold. Stoeferle and Valek predict that the other three ratios will catch up after gold's trend reversal in the following few months.

Back to gold and the dollar

Just as they argued previously that the world's view of the dollar as the international currency of choice appears to be waning, they also believe the dollar's activity offers signals of its own into the technicals of gold. They noted that the yellow metal has "held up surprisingly well" even though the dollar has been strengthening over the last 14 months. Other sources noticed the same thing earlier this year.

Stoeferle and Valek said their model is throwing up a buy signal for the dollar, which means a bearish sign for gold. Real interest rates in the U.S. also remain around 1%, which is another argument against gold. However, the Consumer Price Index has begun to shift higher for the first time in six months, they add. They believe that if this trend continues, lower real interest rates could actually drive higher silver and gold prices.

"Overall, the model is bearish and advises a neutral and patient stance until the typical summer low (normally to be found between end of June and mid of August)," they conclude. "Should gold not dive too deep until this low of the year, the sleeping more than 5,000-year-old golden dinosaur might indeed have enough power to break through the resistance around USD 1,360 and catapult himself towards USD 1,500 by spring 2020."

Other forecasts for the gold price

The forecasts included in the "In Gold We Trust" report aren't the only ones circulating this week. Billionaire Thomas Kaplan of Electrum Group predicted a gold price of $5,000 in an interview with Bloomberg. He also believes the yellow metal is just about to enter a new bull market lasting 10 years. Like Stoeferle and Valek, he predicts lower near-term gold prices, but in 10 years, he sees the precious metal trading at $3,000 to $5,000.

Standard Chartered predicts that the gold price will average $1,285 per ounce for the second quarter. The firm's precious-metals analyst also noted that demand from the world's central banks and from India continue to support the gold price.

On Friday the yellow metal received some support as global stocks, especially in Europe and Asia, sold off in early trading. After dipping below $1,300 an ounce, the gold price reversed again and began to head back toward that key price level.