Sony unveiled the much-hyped Xperia 1 flagship in February, and the device is finally coming to the United States. Sony has announced that it would start accepting pre-orders on June 28th in the US. The device will be competing with Samsung’s Galaxy S10 line and the affordable premium OnePlus 7 Pro smartphones. How does the Sony Xperia 1 stack up against OnePlus 7 Pro? Let’s find out. The new Xperia flagship is facing supply shortages in Europe.

While most other smartphone vendors are pushing for a bezel-less and notch-less design, Sony has kept thick bezels at the top and bottom of Xperia 1’s screen. The device doesn’t have a notch, pop-up camera, or hole-punch design to reduce the notch. It also lacks the 3.5mm headphone jack, which is also missing from the OnePlus 7 Pro. Sony has launched the phone in Black, Purple, Grey, and White colors. The Purple color option has become popular in European markets.

The Xperia 1 measures 167 x 72 x 8.2 mm and weighs 178g. Its front and rear glass panels are protected by Corning’s Gorilla Glass 6. For authentication and security, Sony has opted for a side-mounted fingerprint sensor, which is integrated into the power button. The device comes with an IP68 rating for water- and dust-resistance, meaning it can remain submerged in up to 1.5 meters deep water for up to 30 minutes.

Though OnePlus 7 Pro is not as tall as its rival, it’s thicker and wider than Sony’s phone at 162.6 x 76 x 8.8 mm. It’s also pretty heavy at 206g. Both smartphones have stereo speakers to enhance the audio experience. But the OnePlus flagship lacks water resistance.

OnePlus 7 Pro has curved glass panes on the front and rear, supported by a metal frame in the middle. Unlike the new Xperia, it has a truly bezel-less and notch-less design. OnePlus has used a motorized pop-up mechanism to house the selfie camera. The front camera pops up when you want to make video calls or take a selfie. The pop-up module retracts itself if you accidentally drop the phone.

The OnePlus 7 Pro gets an optical in-display fingerprint sensor for authentication and security, which is insanely fast and convenient. Its rear panel is protected by Corning’s Gorilla Glass 5. The device comes in Nebula Blue, Mirror Grey, and Almond colors.

One of the biggest highlights of Sony’s new phone is its display quality. The Xperia flagship sports an ultra-tall 6.5-inch CinemaWide OLED display with a 4K resolution of 1644 x 3840 pixels. It has an impressive 643ppi of pixel density and a tall 21:9 aspect ratio. Many apps don’t yet support the 21:9 aspect ratio. The display supports HDR technology to enhance the video experience.

Sony worked with Netflix to optimize its CineAlta video playback technology for 4K HDR OLED display. When you are watching Netflix videos, an automatic ‘Creator Mode’ will provide a “faithful reproduction of the creator’s intended vision.”

The OnePlus 7 Pro also boasts a wonderful display, which has received the highest rating from the testing firm DisplayMate. It sports a larger 6.67-inch Fluid AMOLED display with Quad HD resolution of 1440 x 3120 pixels. It has a 19.5:9 aspect ratio and 516ppi of pixel density. The OnePlus flagship offers a blazing fast 90Hz refresh rate, which enables a faster and smoother gaming experience.

The Xperia 1 packs 6GB RAM and 128GB of internal storage for the North American version. In some markets, Sony also sells the phone with 64GB storage. The device has a microSD card slot with support for up to 512GB of external storage. Both the Xperia 1 and OnePlus 7 Pro run the same Qualcomm Snapdragon 855 chipset with Adreno 640 GPU.

The Xperia 1 features a decent 3330mAh battery with 18W fast charging that delivers up to 50% charge in just 30 minutes. Sony has also added a Smart Stamina and Stamina Mode. The Smart Stamina feature predicts how long your phone’s battery will last and adapts power consumption to keep you going for longer.

Both devices run the Android 9 Pie software out of the box. The OnePlus 7 Pro runs the Chinese company’s custom OxygenOS 9.5 skin on top of Android Pie. The OxygenOS 9.5 offers a similar experience as the stock Android while bringing tons of goodies. It has features like Gaming Mode and Smart Boost to offer better performance while preserving battery life. It also features background optimization to keep the phones running fast even as they age.

Though Sony makes some of the world’s best image sensors, it’s not known for making the world’s best smartphone cameras. Anyway, the Xperia 1 has one of the best cameras the company has ever put on a smartphone. It features a triple camera setup on the back, consisting of a 12MP wide-angle lens, a 12MP telephoto lens, and a 12MP ultra-wide angle sensor. On the front, it features an 8MP selfie camera with f/2.0 aperture.

The OnePlus 7 Pro also has a triple camera system on the back, which is among the world’s best, according to DxOMark. It features a 48MP primary lens with OIS, a 16MP ultra-wide angle lens with 117-degree field of view, and an 8MP telephoto lens with 3x optical zoom. It can record 4K videos at 60fps. For selfies, the device gets a 16MP pop-up camera that appears whenever needed.

Sony has priced the Xperia 1 at $950, which sounds incredibly expensive. But the company is offering an exciting deal to pre-order customers, which brings down its effective price to just $600. And the deal is worth it. Sony has announced that it would be taking pre-orders for the device between June 28 and July 12, when the phone hits the store shelves.

For $950, the Xperia 1 pre-order customers will get Sony’s popular 1000X M3 wireless noise-canceling headphones for free. The 1000X M3 headphones are among the best in the industry, and cost $350 if you buy them separately. Customers can pre-order the new Xperia through Amazon, Best Buy, B&H Photo, Focus Camera, and Beach Camera stores. 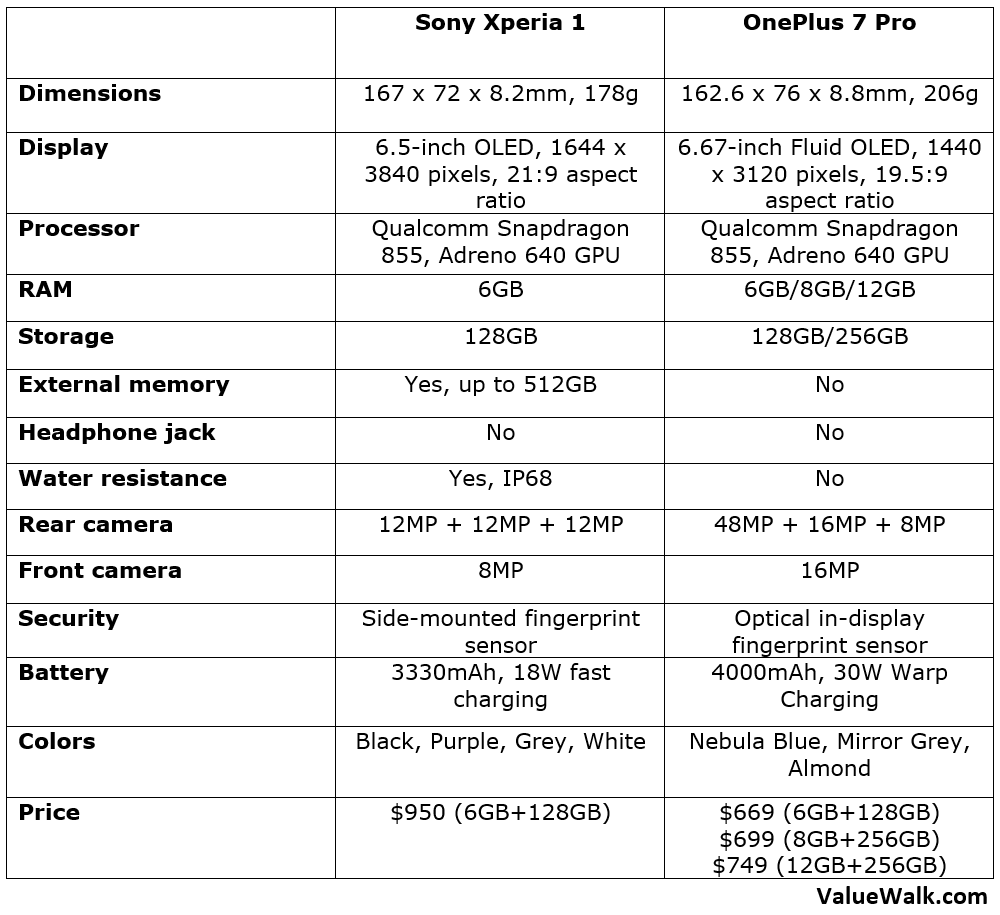