ValueWalk
Home Videos Macro Bet Or Micro Delusion? The Marketing Of Beyond Meat 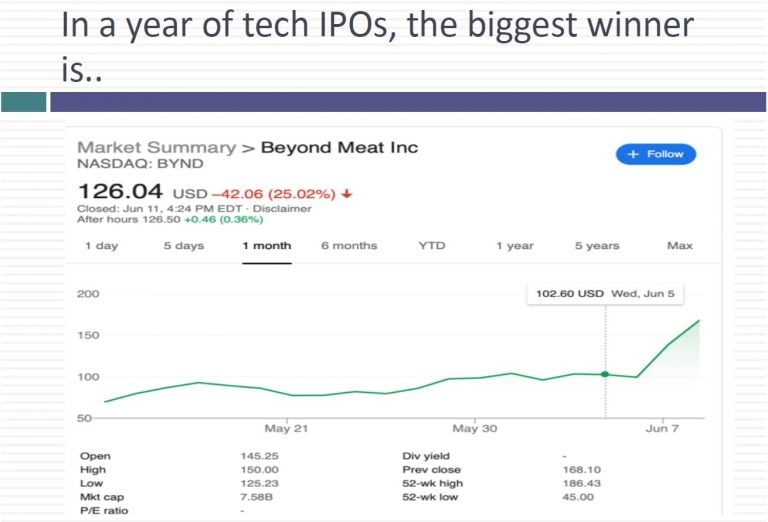 It is ironic that in a year of high profile tech IPOs, it is a young food company, Beyond Meat Inc (NASDAQ:BYND), that has created the biggest splash, with its stock price increasing seven-fold from it offering price. Its meatless meat alternatives (burgers, ground meat) have found a following among meat eaters, who like the taste of meat but worry about its health and environmental consequences. Starting with an assessment of the meatless meat market’s growth over time, I value Beyond Meat with a series of optimistic assumptions, i.e., that it gains a significant market share and build competitive advantages, but my assessment of value is well below the market price. In my view, investors are using the company’s stock as a proxy bet on a macro trend, i.e., a shift towards vegan and vegetarian diets, but are glossing over the other components that need to come into play for their investments to pay off.

Macro Bet Or Micro Delusion? The Marketing Of Beyond Meat

In a year filled with IPOs you think the tech companies that got the superstar the zooms would have been front and center.

But the biggest winner this year has been a surprise. A company called Beyond Meat a company that makes meatless meat. I know that sounds like an oxymoron. It's a stock that was oh that the offering price was set at 25 opened up at about sixty dollars and has not looked back since. In fact yesterday at the close of trade on Friday the stock was trading at close to 170. It took a big dive today but it's still trading at almost five times its offering price. So I thought that it might make sense to take a look at what this company does and why it might be trading the way it is. Let's start with basics. The company's been around almost a decade. It was founded in 2009 and also gone in Southern California. And it makes meatless meat alternatives burgers ground meat out of pea proteins basically plant based alternatives to meat foods. Its claim to fame is that these meatless alternatives taste a lot like meat that they have the texture the taste the smell of meat and it's clearly aimed at a subset of the population that loves meat but is guilt ridden or driven by health concerns to not eat meat anymore. In fact and the prospect is that the company fired in 2019 just before the IPO the company claimed that it had a proprietary process that allowed it to make this this plant based food that tasted a lot like meat. So with that setup let's look at where the company sits in that marketplace and what's driving the growth in the company.

The company's clearest and most immediate competitor is a company called Impossible Foods another young company that also creates plant based meat plant based burgers and meats that taste a lot like meat. In fact both companies have adopted remarkably similar strategies. In addition to going into grocery stores especially the upper end and getting their food on to the into the frozen food section they've also reached out to fast food companies. Impossible Foods has actually been more successful than Beyond Meat in this no Burger King has an impossible whopper a bug a burger that is made out of the plant based food that impossible food does. But beyond meat has its own curb their own list of fast food companies TGIF fridays call Junius Red Robin that have built alternative alternatives for those people who don't want to eat meat. No these are not the only two players in the game. There are other companies lined up and some of them are old time organic companies. Companies that are vegetarian or vegan based like Amy's kitchen but also the old players in the meat game Tyson and Tyson Foods and Perdue for instance have turned their attention towards this potential market. Now what's driving the growth of this market. The meatless meat market are three factors. The first is health whether merited or not.

Bread meat has acquired a reputation of being connected to cardiac failure and cancers in bad health. And while the research continues there are people. The shift has already occurred. Police in the US away from beef to chicken. But there are people who argue that even chicken carries its own own health risks so one factor driving people away from meat based diets is the desire to have better health. The second is a more recent and Pera concern but it's risen to the top and that's meat so generally we know leave a big environmental footprint. Beef in particular creates a huge footprint in terms of environmental waste and to the extent that you care about climate change and environmental issues that are people are concerned that eating meat adds to those problems. So the second argument for moving away from meat based diets is based on people are ecologically environmentally conscious and want to get away from foods that cause a lot of damage. And the third is taste. We've had meat alternatives for a long time but they did not taste like meat. They were not like meat in terms of texture and taste. I'm not saying Beyond Meat and Impossible Foods solve the riddle. But they've come close. They've come up with foods that are all turns to meet that taste a lot like me as I describe this though remember that the focus for these these meatless meat companies is not lifelong vegetarians because I grew up with lifelong vegetarians. Let's face it they don't like the taste of meat. They don't look forward to it they've never eaten it. It's really people who love meat but are don't really want to eat meat anymore. So let's think about how this plays out in terms of market sizing what is the potential market here. Let's start with some basic facts because in all this talk about the growth of meatless meat and alternatives to traditional meat we forget a couple of things. The first is that the meatless meat market is still small relative to the meat market.