OnePlus 7 has gone on sale in the UK, Europe, China, India, and many other markets. OnePlus has kept the OnePlus 7 in the affordable segment while selling a more expensive OnePlus 7 Pro to people who want a premium phone. It’s basically a OnePlus 6T with a more powerful processor and a better camera. It is in the same price range as Google’s recently launched Pixel 3a XL. If you are in the market for a new Android phone, you might be wondering whether to go for the OnePlus 7 or Pixel 3a XL. This Pixel 3a XL vs OnePlus 7 comparison will help you decide which one is a better buy.

Pixel 3a XL vs OnePlus 7: Design

Neither phone has the latest and greatest design. The Pixel 3a XL has thick bezels at the top and bottom of the display. It has a plastic back with a dual-tone finish. The rear panel houses a single camera lens and a circular fingerprint sensor. The device retains the 3.5mm headphone jack and offers bottom-firing speakers.

The Pixel 3a XL is available in Just Black, Clearly White, and Purplish colors. It measures 160.1 x 76.1 x 8.2mm and weighs 167g. Google doesn’t offer water resistance on the Pixel 3a XL.

OnePlus 7, on the other hand, has the same design as last year’s OnePlus 6T. It measures 157.7 × 74.8 × 8.2mm and weighs 182g. The device comes in Mirror Gray and Red color options. It has a glass sandwich design with a rounded metal frame. Its display doesn’t have curved edges. The rear panel is curved on the sides, making it more comfortable to hold in hand.

The OnePlus 7 lacks the 3.5mm headphone jack and water resistance. It has slim bezels around the display. The device has a waterdrop notch to accommodate the selfie camera. It has an optical in-display fingerprint sensor for authentication and security. The fingerprint sensor is fast and secure. The device also gets stereo speakers.

On the rear panel, the OnePlus 7 has a vertically aligned dual camera setup. OnePlus has used Corning’s Gorilla Glass on both the front and back for protection.

Pixel 3a XL vs OnePlus 7: Display

Both devices sport OLED displays, which are far superior to LCD screens in color reproduction and accuracy. The Pixel 3a XL features a 6-inch gOLED panel with Full HD+ resolution of 2160 x 1080 pixels. It offers 402ppi of pixel density, an 18:9 aspect ratio, and HDR10 support. It has a relatively lower 76.3% screen-to-body ratio due to thick bezels at the top and bottom. Google has used Dragon Trail Glass for protection.

The OnePlus 7 features a 6.41-inch Optic AMOLED display with Full HD+ resolution of 2340 x 1080 pixels. It has a waterdrop notch and an impressive 84.7% screen-to-body ratio. You can change the color profile from Natural to Vivid or choose from different color gamuts. It also supports hardware DC dimming to ensure that the display doesn’t flicker at low brightness settings.

The Google Pixel 3a XL is a mid-range device running Qualcomm’s Snapdragon 670 processor with Adreno 615 graphics processor. The chipset is powerful enough to handle day-to-day tasks, but it’s not suitable for heavy gaming or multitasking. The device packs 4GB RAM and 64GB storage. Google doesn’t offer external storage on the Pixel 3a XL, though it does give users unlimited free cloud storage of photos and videos.

The Pixel 3a XL supports payments via Google Pay and the latest Bluetooth 5.0. It also gets the Titan M security chip and the AR Core framework for augmented reality. The Google phone also supports Active Edge to allow users to activate Google Assistant by squeezing the phone.

The OnePlus 7 is far more powerful than Pixel 3a XL. It packs Qualcomm’s Snapdragon 855 chipset paired with Adreno 640 GPU. It’s one of the most affordable phones to offer the Snapdragon 855. It includes a larger 6GB RAM with 128GB storage for the base model. There is also an 8GB RAM variant with 256GB storage. OnePlus uses the latest UFS 3.0 storage technology. The company also sells a 12GB+256GB configuration in China.

Pixel 3a XL vs OnePlus 7: Battery

The Pixel 3a XL has a smaller display that would consume less battery power than OnePlus 7.

The Pixel 3a XL runs Google’s latest Android 9 Pie software. Google has promised three years of software updates and security patches on the device. It will be among the first phones to get the upcoming Android Q update. Google’s device has a lot of AI baked into it. It also gets a call screening feature that screens against spam calls and telemarketers.

The OnePlus 7 also runs Android 9 Pie, but has a custom OxygenOS 9.5 skin on top. The experience on OxygenOS is pretty close to stock Android. The custom skin brings some useful features and customization. It has a dedicated Gaming mode to allocate resources to ensure smooth gaming. OnePlus has rolled out the April 2019 security patch to OnePlus 7, bringing the new Fnatic mode and some optimizations for the camera and fingerprint sensor.

The Pixel 3a XL gets Digital Wellbeing to monitor and control how much time you spend on your phone. The OnePlus 7 has Digital Wellbeing as well as its own Zen Mode. The Zen Mode disables all features of your phone except the ability to click pictures and make emergency calls. You cannot turn it off for at least 20 minutes after you enable it.

Pixel 3a XL vs OnePlus 7: Camera

The Pixel 3a XL has the same camera setup as the premium Google Pixel 3, which is among the world’s best smartphone cameras. However, it lacks the Pixel Visual Core, which means the image processing is slightly slower than the Pixel 3. It features a 12.2MP main camera with OIS, EIS, and f/1.8 aperture. The phone has an 8MP selfie camera with f/2.0 aperture.

The OnePlus 7 sports a dual camera setup on the back and a single lens on the front. It features a 48MP primary Sony IMX586 sensor with OIS, PDAF, and f/1.7 aperture. It is paired with a 5MP depth sensor with f/2.4 aperture to take portrait images with blurred backgrounds. For selfies, it has a 16MP camera with f/2.0 aperture.

If you take pictures in the default Photos mode, the camera uses pixel binning technology to turn the 48MP pictures into more detailed 12MP photos. It is particularly useful in low-light conditions. If you want, you can use the Pro Mode to take photos in 48MP resolution. The OnePlus 7 offers Night mode, Time-Lapse, Panorama, and Portrait mode. It is capable of shooting 4K videos at 60fps.

The Pixel 3a XL has been priced at $479 in the US. It is available on Sprint, T-Mobile, US Cellular, and Verizon. It also supports the AT&T network. You can also get the device through Best Buy or Google Store. There is also a smaller Pixel 3a that costs $400, but has the same specs as Pixel 3a XL except for the screen size.

The OnePlus 7 boasts a better design, a bigger display, a more powerful processor, more storage, and more RAM. One area where the Pixel 3a XL has a clear edge is the camera. It doesn’t mean the OnePlus 7 camera is bad. It just means Google’s camera is slightly better. 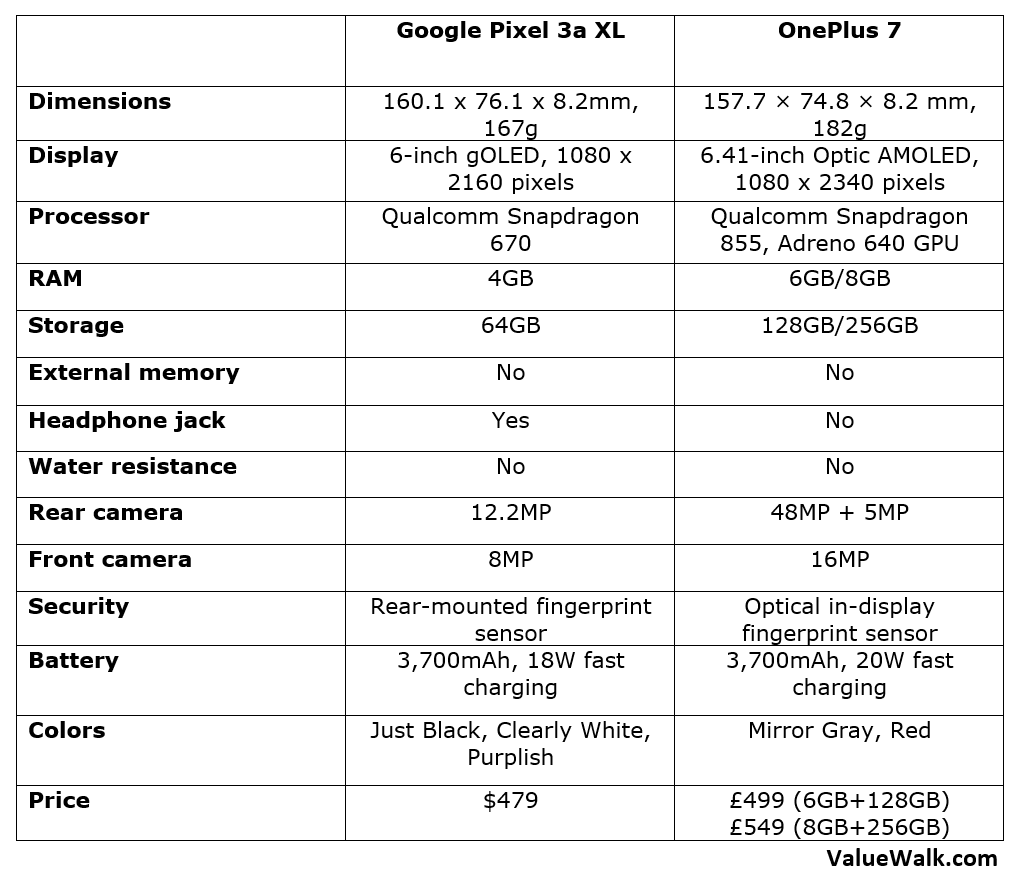