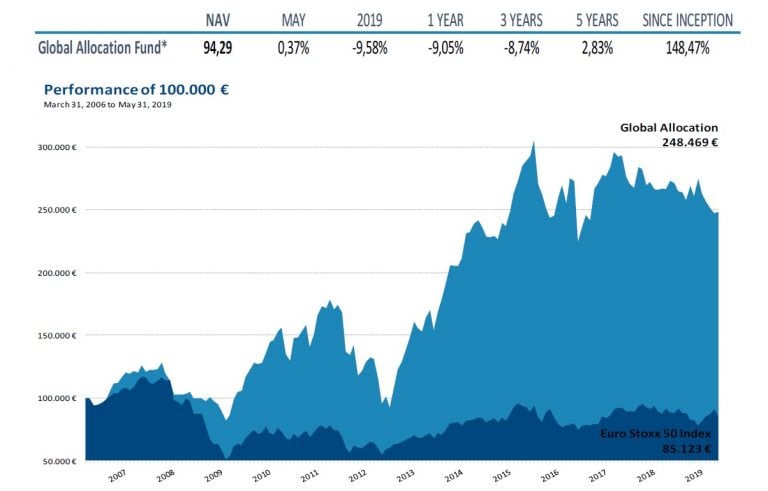 Global Allocation Fund commentary for the month ended May 31, 2019.

This year has turned out as one of the hardest that I remember, although 2018 was no formality either.

Basically, last year we ended up being right in our diagnosis, although our management was not good enough for the degree of success we had It is true that as a weapon of prudence and calmness, we must always think that we can be wrong, because the mistakes in this business, when you insist on being right, usually end in tears.

Even so, we ended up being one of the few funds that ended the year in positive, which reinforced us to start this year more aggressively and confidently.

It seems that once again we exceeded our estimates in terms of the evolution of the market, which caused us to withdraw ( of our bearish positions, once the market kept following the same direction, being able to achieve new highs, even if just for a few bps.

It is strange that it is so, but it is not impossible In fact, it almost confirms even more that it is possible that we have indeed seen the maximums, even more when this highs have marginally been in the S P 500 while many other indices have not achieved maximums. 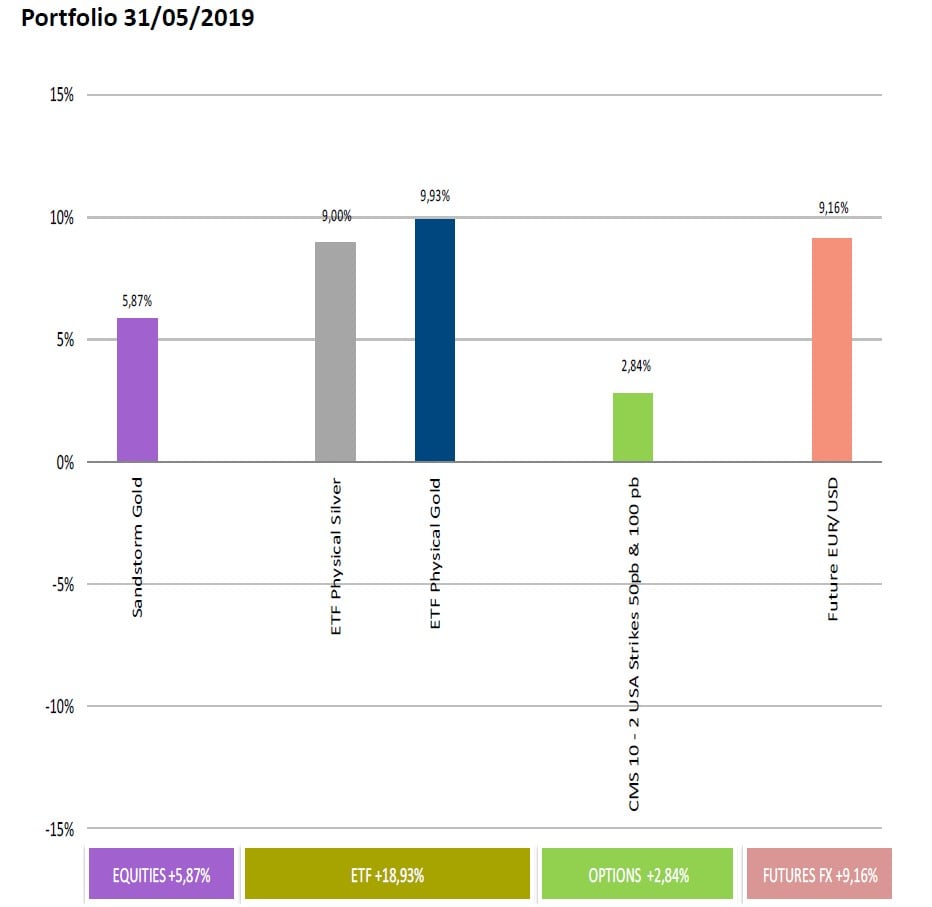 Surely we are right, but the truth is that the stress caused by markets that are totally dependent on the tweets that Mr Trump decides to send, produce at least a sense of uneasiness.

Mr. Trump knows, as we know some more, that if the stock market falls, the recession that is about to come, and that it is gradually showing its teeth, will be much worse, due to the wealth effect, and if this happens, his reelection probabilities will decrease, and by the second.

The failure in the negotiation with China, catalyst of a possible and violent change of cycle, is considered by everyone as yet another negotiation tactic But the truth is that it seems to be getting worse and worse.

It is possible that we are witnessing a change in Trump's tactics in terms of becoming detached from the evolution of the stock market, to a more emotional strategy, as surely more than one is advising This strategy involves invoking National Security every day that arises and defending the hegemony of the United States at whatever price.

Thus, we see that, although the European front has been partially " by postponing tariffs to the automotive sector (and getting some rebound in the markets), has opened in a matter of two days again the tension with Mexico and India.

The truth is that the markets are not just stock markets, as bond markets, scared by the arrival of winter, are quoting imminent drops in US interest rates of which we have little doubt that will happen The Federal Reserve ( has already shown its unconditional support for the maintenance of the "big bubble" and will undoubtedly do everything it can to contain the damage This support from the FED in January, and our doubts that this change of criteria (of raising to maintain or lower interest rates), would have the strength it had, makes us think if it is not possible to continue keeping control As time goes by, we are clearly finding it hard to believe that containing the tide is hard, although it is hard to stumble twice with the same stone.

This is the reason why we decided to play in favour of this attitude, and the positions that we have now in CMS, would greatly benefit a fall in rates This would undoubtedly make it easier for the difference in rates between 2 and 10 years in the US to significantly increase In fact, we are thinking of increasing this position, that although it does not benefit from equity falls in the short run, it is a positive thing for him as falls in the stock market will certainly force the FED to lower interest rates We hope this change will give us even more benefits if we turn out to be right with our short positions, while reducing day to day stress substantially.

This does not mean that we have thrown in the towel with regards to obtain some returns in the down markets, but as I say, the unrest of this type of positions is very high, and even more so for the more sufferer investors when they see they are losing money while everyone is winning To win when everyone is losing is always own success, while losing, especially when everyone is winning, must be others fault Mea culpa.

This fact has been studied in behavioural psychology, and this is one of the main errors we commit managers/investors when taking decisions, as well as the main cause of bubbles It is also one of the hardest to avoid, even though having knowledge of it.

Needless to say, that this fact multiplies thanks to those funds that are increasingly using AI as a weapon for return obtention.

Thanks to all of this, we are witnessing record after record with regards to the absurd of the markets The 10 Yr German bong has managed to reobtain the negative returns from August 2016 0 20 To buy this without thinking that any other would buy it at a higher price if for idiots, if I may To buy something thinking that someone will buy at a higher price afterwards, is a bubble ..(Currently there are more than 11 3 trillion USD in negative return bonds, including those of some corporates).

The European equity, on the other hand, does not appear to be in bubble status Although it has not enhanced its EPS for the last 10 years Although it seems as Deutsche Bank has disappeared, the truth is that its valuation continues to register low after low The size of this giant in comparison to Lehman Brothers, invites us to shake The Germans will certainly do something If necessary they can issue more 10 yr bonds, without mentioning the car manufacturing industry, currently valued very cheap It seems as they are going to make Tesla reach bankruptcy too.

The truth is I don’t get tired of saying that the ECB, with its negative rates policy is dragging banks to a hole with no way back in general as they can’t win money from their client’s deposits nor from the credit markets spreads that exist to lend, as the ECB has not stopped either to buy bonds from different companies, reducing with the healthy margins which should be quoting in the market Therefore, the banks don’t win, and at the end they have to pay for the money even more than their clients Meanwhile, the ECB continues to decline buying bank bonds.

As something new, we must point out that we are gradually seeing more and more the worst possible scenario, and this is no less than a recession with a higher inflation than normal, produced without a doubt by the induced costs of trade tariffs If this finally happens, and central banks lose the possibility of buying bonds and issuing liquidity from nowhere as done currently to keep maintaining the bubbles, we will see what happens in countries such as Italy (with their 10 yr bonds with the same returns as the Greek) and progressively, with the remaining others With no doubt, public financial statements will suffer in a recession, and they aren’t precisely for any party, including in the US If the bubble started to slowly explode within the equity and bond markets, which is a real possibility, as one sustains in a great extent the other, the scenario might even be worse that what we think reasonable.

This scenario is improbable, as we must add to the current great quantity of debt, with its deflationist effect, the behaviour of oil and other raw materials, which are equally plummeting For the time being, and while the confidence in FX and the possibility of printing money with no consequence from Central Banks continues, we are more or less fine.

The truth must be said, I sometimes get that feeling in my body that tells me to buy German government bonds I think the day will come when someone will buy them really overpriced Nevertheless, I’d rather wait and if that day comes, we will sell them, that for sure would be what should be done It might come by sooner than I expect, occasionally.