The era of 5G smartphones has officially begun in 2019. Almost every major smartphone vendor except Apple has launched a 5G-capable smartphone. At the ongoing Mobile World Congress in Shanghai, Lenovo unveiled the 5G version of its Z6 Pro flagship, which was announced in April. The Lenovo Z6 Pro 5G edition would compete with Samsung’s Galaxy S10 5G in China and other markets. Let’s check out how Lenovo’s 5G phone stacks up against that of Samsung.

Samsung’s 5G phone has a nearly bezel-less and notch-less design. It uses a hole-punch display to accommodate the selfie camera in the top-right corner of the screen. The back panel is made out of glass and is protected by Corning’s Gorilla Glass 6. The front and rear glass panels are supported by an aluminum frame in the middle. The S10 5G is available in Majestic Black, Royal Gold, and Crown Silver colors.

The Galaxy S10 5G measures 162.6 x 77.1 x 7.9 mm and weighs 198g. It comes with an IP68 rating for water- and dust-resistance. The device can remain submerged in up to 1.5 meters deep water for up to 30 minutes. It retains the 3.5mm headphone jack. For authentication and security, it features an ultrasonic fingerprint sensor placed under the display, which is fast, secure, and reliable.

The Lenovo Z6 Pro 5G edition also has a nearly bezel-less design, though it has a thin chin at the bottom. The device has a waterdrop notch at the top to house the selfie camera. Just like the S10 5G, it retains the 3.5mm headphone jack. The device measures 157.5 x 74.6 x 8.7 mm and weighs 185g.

For security, Lenovo has used a photo-electric fingerprint sensor placed under the display. It has a vertically-aligned quad camera setup on the back. What’s interesting about the Z6 Pro 5G is the transparent design of its rear panel, which shows the internals of the device. It’s unclear whether it’s a genuinely transparent back panel or Lenovo has used a sticker on top of the rear panel to mimic the internals.

The S10 5G has two holes in the top-right corner of the screen to house the front cameras, but they are not that annoying. It supports Always-On Display technology and HDR10+ to enhance the experience when you are watching videos or playing games.

The Lenovo Z6 Pro 5G features a 6.39-inch Super AMOLED display. It has a full HD+ resolution of 1080 x 2340 pixels. The device has a 19.5:9 aspect ratio, a slightly lower 403ppi of pixel density, and an 85.3% screen-to-body ratio. Lenovo has used a blue light filter on the screen to protect your eyes. Other features include HDR10 support and DC dimming.

In China and the US, Samsung sells the Galaxy S10 5G with Qualcomm’s Snapdragon 855 chipset and Snapdragon X50 5G modem. The device features the Adreno 640 graphics processor. The units sold in other markets run Samsung’s own Exynos 9820 chipset paired with Mali-G76 GPU and Exynos 5100 modem for 5G connectivity. The Korean company promises uplink and download speeds of up to 1.2Gbps.

The S10 5G packs a huge 4,500mAh battery with 25W fast charging and 15W fast wireless charging support. It also offers Wireless PowerShare technology, which lets users charge other compatible devices and accessories by putting them on the back of the phone. Since they are both 5G phones, they consume a lot more battery than a 4G smartphone.

The Z6 Pro 5G edition runs the same Qualcomm Snapdragon 855 processor with Snapdragon X50 5G modem and Adreno 640 GPU. The smartphone comes in three different RAM and storage configurations: one with 6GB RAM and 128GB storage, another with 8GB RAM and 256GB storage, and a top of the line model with 12GB RAM and 512GB of storage.

Unlike Samsung’s 5G phone, the Z6 Pro 5G has a microSD card slot with support for up to 512GB of external storage. The device also features a PC-grade Coldfront liquid cooling mechanism to prevent it from overheating when you are playing games or multitasking. Software-wise, it runs Android 9 Pie with Lenovo’s custom ZUI 11 skin on top.

The Z6 Pro 5G packs a relatively smaller 4,000mAh battery with 27W fast charging. It also supports reverse wireless charging, allowing you to charge other devices by putting them on the back of Z6 Pro 5G.

Lenovo uses a lot of software tricks to enhance the photography experience. It has a Hyper Video feature that captures videos with both front and rear cameras simultaneously. It also gets a Hyper Vision feature to shot pictures at 100-megapixel. Other features include Super night photo, Super sports video, and Super wide-angle video.

The Galaxy S10 5G is incredibly expensive. It costs $1,300 for the base model with 256GB storage. The 512GB storage variant will set you back by $1,400. Samsung has partnered with Verizon and other carriers to sell the Galaxy S10 5G in the US. Lenovo hasn’t yet revealed the pricing and release schedule of the Z6 Pro 5G. It’s unlike to cost as much as the S10 5G. 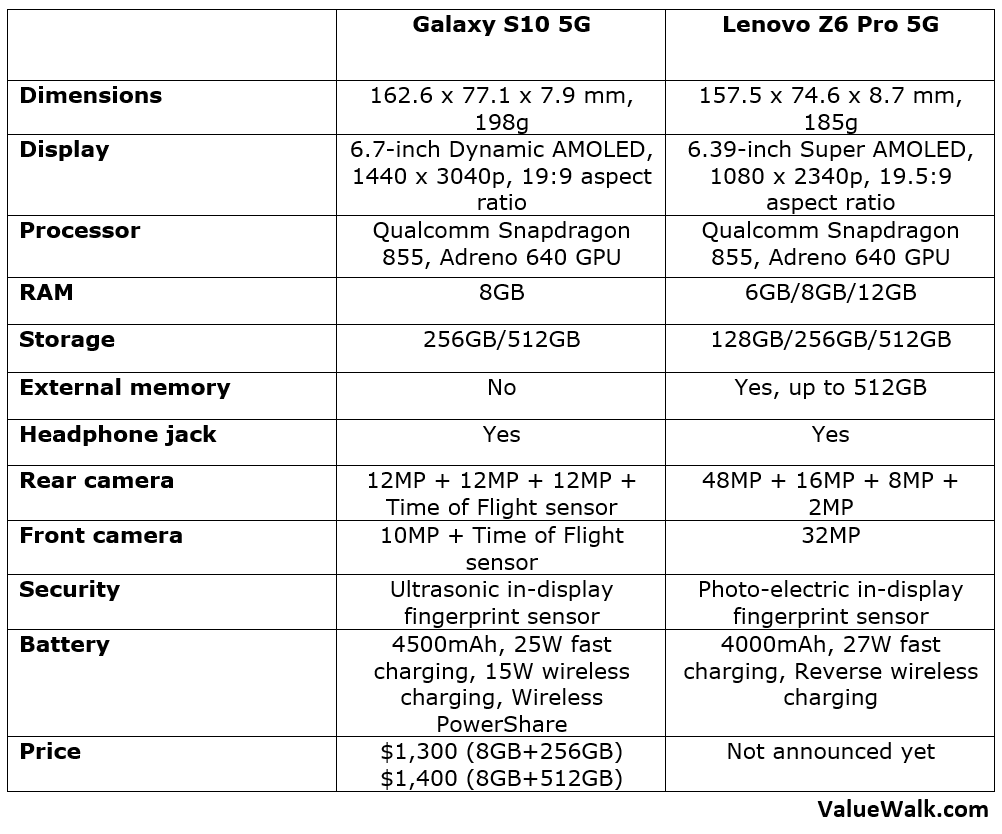