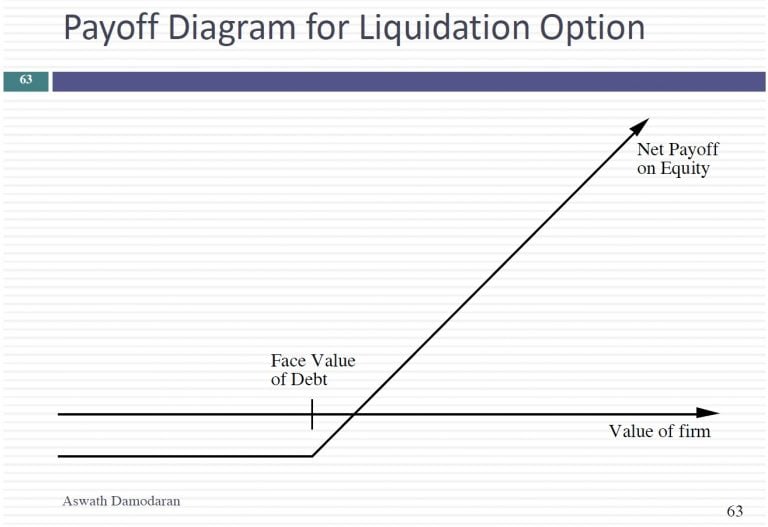 In this session, we started by looking at the option to expand and how it explains why big data and platforms can have premium value sometimes, and what conditions need to hold for that premium to be large. We then looked at the option to abandon and why firms that have more flexible business models can have higher value. We closed by looking at equity in deeply distressed and indebted companies as options.

What do we talk about options in last session we talked about the value of undeveloped reserves in an oil company. Or in any commodity company as an option. And where does the option really come from. What is the option today comes from the fact that you can produce the oil right away but you could wait. And maybe oil prices would go up and because you get to observe the oil prices there is optionality which allows you to add a premium on top of the value. I want you to give all the talk in your mind because today started the class. This is going to be built on something that comes out of that option. So let's suppose I came to you with two oil companies like Royal Dutch and Petrobras. Let's say they have the same value both companies. But here's where they're different Petrobras gets a bulk of its value from undeveloped reserves Royal Dutch gets a bulk of its value from developers. It's assumed that they both have the same rights. So today they both valued the same. But one gets a bulk of its value from undeveloped reserves the other gets it from developers. Now assume that oil prices jump from sixty dollars a barrel to one hundred dollars about something happens in the Middle East. Hey so what will happen to the value that two companies.

There are two components valid does develop reserves and undeveloped reserves. So when oil prices go up both will go up. So my guess is they'll both go up. I'm not even sure which one will go up more but now I'm going to make it interesting you know Middle Eastern crises come and then they go.

To what is widespread. So now comes the interesting question. So 60 to 100 back to 60. I look at the values of these two companies again. Nothing's changed right. Or has something changed. What did that two day window do to you.

Oh that's gonna be very tough in one day that's going to be very very difficult. So let's assume that away.

Yeah I think you're assuming too much happens in a one in one day right.

It's Monday Tuesday Wednesday so. But once they back. Nothing. Nobody in these companies even comes into work Monday and Tuesday. The oil companies what are you going to do. You're getting close. What's the volatility we use an option value. When we talk about valuing undeveloped reserves as an option we use a volatility. Where do we get that volatility. We might look at the past prices but the reality is the perceived volatility in these two days change that perception. It's going to be a much higher volatility holding all else constant you know what's going to happen two days later same oil price. Petrobras is now going to be worth more than Royal Dutch because so much of its value came from the optionality. The point I'm trying to make is when we value commodity companies we tend to think about the commodity price. Of course it matters oil prices matter for oil companies but we also need to think about oil price volatility because that too can affect the value of the lots of shale oil companies now where the reserves are actually non-viable and those reserves are like out of the money options as oil prices become volatile.

You can expect to see their equity values kind of reflect that optionality now I want to add one more tool to your arsenal.

You know how to value call options to them. So let's assume that Petrobras is now offering these undeveloped reserves for sale to the highest bidder. With a caveat. And here's the caveat. If the price per oil exceeds one hundred and fifty dollars the winning bidder has to pay the extra amount back to the Brazilian government or to Petrobras. So basically you get the right to these undeveloped reserves. But unlike regular right. So you get them at whatever price. I'm going to put a cap on the price. Is there a way to convert. First tell me what the cap is going to do to the value. So you're bidding for the undeveloped reserves. What happen to the value of the reserves. You're going to pay less. Right. Is there a way I can value how much less you could. There's actually a simpler way you could do a put option but you can also you know what a capped call is in a cap call. Think of this as a pair day a regular call the price keeps going up in a cap call. You actually stop making extra money. So all you have to do to value the call is value two calls one with a strike price at sixty one with a strike price of 150. Subtract out the value of the second call from the first one it's actually tech. I did this just to give you that technique used. Anytime you get an option with a cap or a floor.