DHR And The Hedged Portfolio Method

With shares of Danaher Corporation (NYSE:DHR) up significantly this year, it’s a good candidate for an aggressive hedged portfolio. “Aggressive” and “hedged” may seem to be antonyms, but they complement each other in this context. When you’re not hedged, you are limited in the extent to which you can concentrate your money in a few names such as Danaher: you need to diversify and limit your position sizing to limit your stock-specific risk. In contrast, in the portfolio below, hedging facilitates concentration into a handful of names while strictly limiting risk. Like a race car driver, we want to step on the gas with this portfolio, but do so with safety in mind – investing with a helmet on, as it were. So we’ll use Portfolio Armor‘s hedged portfolio method to build a concentrated portfolio around DHR.

We’ll start with these premises:

Here's a recap of the steps involved, if you want to do this manually.

The goal of this step is to find names that have the potential to generate high total returns to include alongside DHR - whether those returns come partly from dividends or not isn't relevant (tax considerations aside). Portfolio Armor calculates its own potential returns by analyzing total returns and options market sentiment, but you can derive yours from Wall Street price targets or the price targets reported by Value Walk. Your initial universe can be as big as Portfolio Armor's (the ~4,500 stocks and Exchange-Traded Products with options traded on them in the U.S.) or something smaller, such as the Dow 30.

Since you're going to hedge, gross potential returns are less important to you than potential returns net of hedging costs. To figure those out, you need to figure out the optimal or least expensive way to hedge each name. For this example, you would be looking for the cost of hedging against declines of 20% or greater. The lower the decline you're looking to hedge against, the narrower the list of names you'll be able to use.

For each of the names in your initial universe that has a positive potential return, you'll want to subtract the hedging cost you calculated in Step 2 to get a net potential return.

Here, you simply buy and hedge a handful of names that had the highest potential returns net of hedging costs. The automated approach we'll show below includes a fine-tuning step to minimize your cash, and to determine whether to hedge each position with puts or collars, but these four steps are the basics.

First, we enter "DHR" in the optional tickers field, along with the dollar amount we're looking to invest ($500,000) and the maximum decline we're willing to risk (20%). 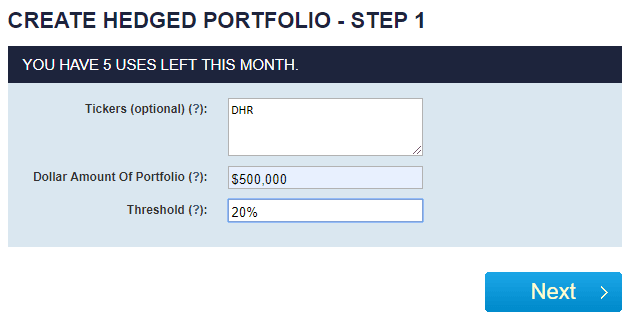 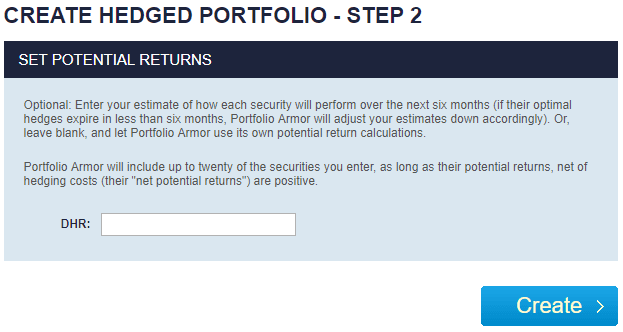 Next, I clicked "Create," and, after a few moments, I was presented with this hedged portfolio: 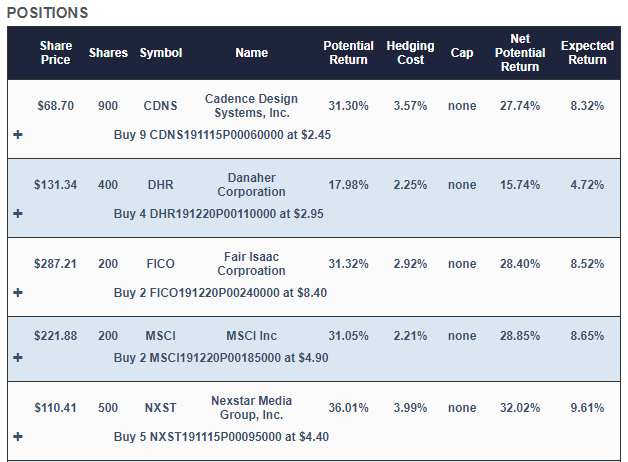 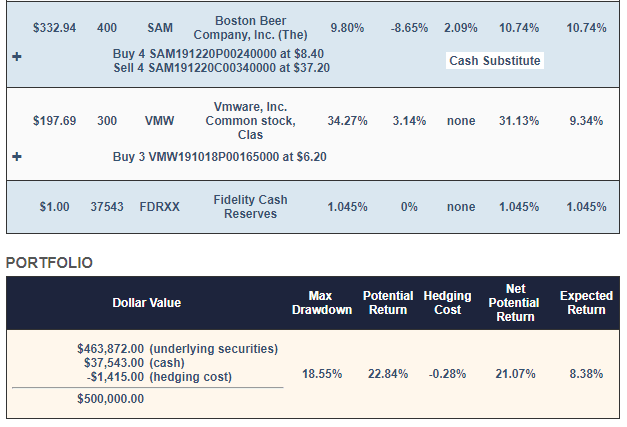 In addition to DHR, the site selected Cadance Design Systems (CDNS), Fair Isaac (FICO), MSCI (MSCI), Nextstar Media (NXST), and VMware (VMW) as primary securities, based on their net potential returns when hedged against >20% declines. The site attempted to allocate roughly equal dollar amounts to each of those names, but rounded down the dollar amounts to make sure it had round lots of each stock.

In a fine-tuning step, it selected Boston Beer (SAM) to absorb cash left over from the process of rounding down the primary securities. SAM is hedged with an optimal, or least expensive, collar with a cap set at the current seven-day (annual) yield of the Fidelity Government Cash Reserves money market fund (FDRXX). The hedging cost of this is negative: The idea here is to get a shot at a higher return than cash while lowering the overall hedging cost of the portfolio and limiting your downside risk in accordance with your risk tolerance (to a drawdown of no more than 20%).

If you're curious why there are so few positions in this portfolio, the short answer is that hedging obviates the need for more and enables a winning position to have a larger impact on portfolio returns. For a longer answer, this article offers an elaboration and an example.

Note that each of the primary securities is hedged, in this case, with optimal puts. Here's a closer look at the DHR optimal puts:

Portfolio Armor's hedged portfolio construction tool tries hedging each primary security with both an optimal collar and optimal puts, estimating the net potential return both ways, taking into account the historical incidence of outliers. Essentially, the lower hedging cost of collars is weighed against the chance for higher upside when hedging with puts. In the case of DHR and the other primary securities, optimal puts won out.

Here's another look at the data summary at the bottom of this portfolio:

The Max Drawdown is the worst-case scenario. That's what would happen if each of the underlying securities went to $0 before their hedges expired (the idea is to hold each position for six months or until just before its hedge expires, whichever comes first). In that case, you'd be down no more than 18.55%.

This is the aggregate cost of hedging the portfolio. Note that it is negative in this case, meaning you would collect a net credit of $1,415 after opening the hedges, assuming, conservatively, that you placed each options trade at the worst end of its spread.

The best-case scenario is the net potential return of 21.07%. That's what you'd get, net of the hedging costs, if each security hit its potential return, which is unlikely.

Each time Portfolio Armor estimates a potential return for a security, it tracks how that security actually performed six months later, and it continually updates the ratio of actual returns to potential returns. The expected return of 8.38% takes that ratio into account, along with the hedging cost. The odds of hitting that number on the nose in a particular portfolio are slim, but, on average, the actual returns tend to track fairly close to expected returns.

Wrapping Up: A Slightly Different Approach

Although in this example we started with a security in mind, Danaher, you could also have Portfolio Armor create a hedged portfolio for you without entering any securities - all you need to do is enter the dollar amount of your portfolio and the maximum drawdown you're willing to risk over the next 6 months.

As for the portfolio above, I will post a follow up showing its interim performance in a few months.