Both smartphones have a nearly identical design. They both measure 159.2 x 75.2 x 8.1 mm and weigh 186g. Both handsets have a glass back protected by Corning’s Gorilla Glass 5. The rear panel has a circular fingerprint sensor and a vertically arranged dual camera setup. On the front panel, they both have a tiny dot notch and a slim chin at the bottom.

Xiaomi has launched the Redmi Note 7S in Sapphire Blue, Onyx Black, and Ruby Red colors. In contrast, the Note 7 Pro comes in Space Black, Neptune Blue, and Nebula Red color options. Xiaomi has used the same Aura Design philosophy on both handsets, meaning they both have a gradient finish. Both of them retain the 3.5mm headphone jack.

Xiaomi has used the same display on both smartphones. Both the Note 7 Pro and Note 7S come with a 6.3-inch LCD screen. They have a Full HD+ resolution of 1080 x 2340 pixels with a 19.5:9 aspect ratio, and 409ppi of pixel density. Both of them have a tiny dot notch at the top to accommodate the selfie camera. They both have an 81.4% screen-to-body ratio.

Their displays are protected by Gorilla Glass 5. Xiaomi claims to have used the best quality LCD screen on its new Redmi phones.

One aspect where the two phones differ in a big way is the processing power. The Note 7S packs Qualcomm’s Snapdragon 660 AIE processor. It comes in two different RAM and storage configurations: one with 3GB RAM and 32GB storage, and another with 4GB RAM and 64GB storage.

Both handsets have a microSD card slot with support for up to 256GB of external memory. The Note 7 Pro runs a more powerful Qualcomm Snapdragon 675 processor. It packs 4GB RAM and 64GB storage in the base model. Its high-end version gets 6GB RAM and 128GB storage.

For authentication and security, both handsets have a rear-mounted fingerprint sensor and AI face unlocking. The face unlock feature is more about convenience than security. On the software front, the devices run Xiaomi’s custom MIUI 10 skin on top of Android 9 Pie.

Both handsets get a giant 4,000mAh battery with Quick Charge 4 support. Xiaomi has added a USB-C port for charging.

On the rear panel, both handsets have a 48-megapixel primary camera accompanied by a 5-megapixel lens. But Xiaomi has used different sensors on the two handsets. The Redmi Note 7S features Samsung’s GM1 sensor while the Note 7 Pro gets Sony’s IMX586 sensor. The Sony sensor captures better details in both low-light and daylight conditions. The rear camera setup on both handsets gets PDAF, AI portrait mode, and EIS.

On the front, they both have a 13-megapixel selfie camera. The front camera supports facial recognition, AI Scene Detection that can detect 12 types of scenes to optimize the images, and AI Beautify. Both handsets get a Night Mode to take excellent images in low-light conditions.

If you are looking to buy a good budget-friendly phone, the Redmi Note 7S is an excellent value for money. It has the same camera, design, and display as the Note 7 Pro. The Note 7 Pro is a better buy for people who want more processing power for gaming. 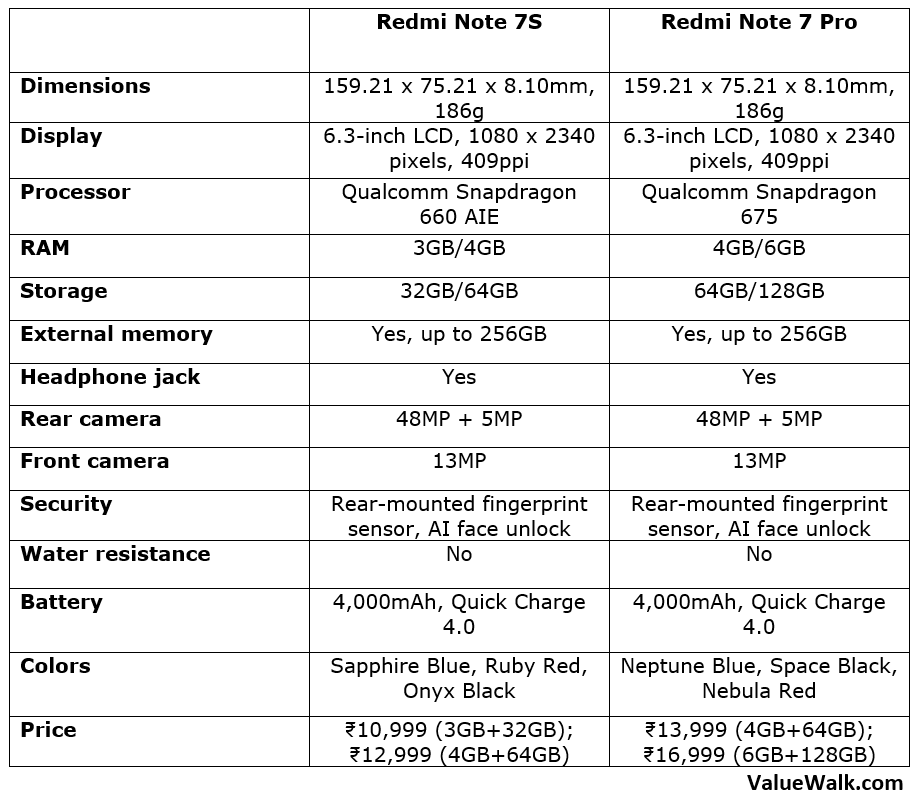