After teasing it for weeks, Redmi officially announced the K20 series at a press event in Beijing, China on Tuesday. The device is loaded with premium specs, and costs a lot less than OnePlus 7 Pro. Only time will tell whether it will be able to make a dent in OnePlus 7 Pro sales.

Both smartphones have a similar design. They both get a bezel-less and notch-less display on the front. Both the K20 Pro and OnePlus 7 Pro use a pop-up mechanism for the selfie camera. Both companies claim their pop-up camera can be deployed in less than a second, which is amazingly fast. On the rear panel, both handsets sport a vertically aligned triple camera setup.

The Redmi phone retains the 3.5mm headphone jack, which is missing from the OnePlus 7 Pro. The K20 Pro comes in Flame Red, Glacier Blue, and Carbon Fiber Black color options. The device has a unique gradient finish that shimmers towards the edges. OnePlus has launched the 7 Pro in Nebula Blue, Almond, and Mirror Gray colors.

For authentication and security, both smartphones use an optical in-display fingerprint sensor, which is fast and convenient. The optical fingerprint sensors are not as secure as the ultrasonic ones, but they are good enough for casual users. With the OnePlus 7 Pro, OnePlus has increased the fingerprint sensor area to make it easier for users to unlock the device.

Both smartphones feature the OLED display technology, which delivers more vibrant colors than LCD panels. The Redmi K20 Pro sports a 6.39-inch AMOLED display with Full HD+ resolution of 1080 x 2340 pixels. Thanks to its notch-less and bezel-less design, it boasts an impressive 91.9% screen-to-body ratio. It offers 19.5:9 aspect ratio, 600 nits of brightness, and hardware DC dimming support.

The OnePlus 7 Pro has a superior display with a higher resolution and a blazing fast 90Hz refresh rate. The 90Hz refresh rate enables a faster and smoother gaming experience. It has earned the highest rating from the testing firm DisplayMate.

The OnePlus 7 Pro offers 6GB RAM and 128GB of internal storage for the base model. If you want more RAM and storage, there is an 8GB+256GB model and a top of the line 12GB+256GB version. It doesn’t support external memory.

The Redmi K20 Pro is equipped with a 4,000mAh battery and 27W fast charging. Xiaomi claims the fast charger delivers from zero to 100% charge in just 50 minutes. We have already seen Xiaomi’s 27W fast charger on the Black Shark 2 and Mi 9 models.

The OnePlus 7 Pro also has a 4,000mAh battery. It comes with the company’s proprietary Warp Charge 30 technology. Neither handset supports wireless charging. Though both devices have the same battery size, OnePlus 7 Pro’s larger display and faster 90Hz refresh rate would consume a lot of power.

Both smartphones run Android 9 Pie with a custom skin on top. The Redmi K20 Pro gets Xiaomi’s MIUI 10 skin, which brings several enhancements. It has built-in Game Turbo 2.0, which allocates resources for gaming. It features a Night Vision mode that brightens the darker scenes in a game to enhance visibility. The software also brings screenshot tools, RAM boost, and silence notifications, among other things.

The OnePlus 7 Pro runs the OxygenOS 9.5, which is pretty close to the stock Android experience. The software offers a fast, smooth, and intuitive experience. It comes with features like Gaming Mode and Smart Boost to offer better performance while preserving battery life. OnePlus also offers background optimization to keep the devices running fast even when they get older.

The Redmi K20 Pro camera hasn’t been tested yet. In contrast, the OnePlus 7 Pro has been ranked among the world’s best smartphone cameras by testing firm DxOMark. In terms of specs, the K20 Pro has a 48MP primary Sony IMX586 sensor with f/1.75 aperture. It is accompanied by a 13MP ultra-wide angle lens and an 8MP telephoto lens with f/2.4 aperture.

For selfies, the K20 Pro has a 20MP AI lens housed in a pop-up mechanism. The main camera is capable of recording 960fps slow-motion videos.

For a long time, the OnePlus devices were known as “flagship killers.” But OnePlus has been consistently increasing the prices of its phone over the years, and the latest OnePlus 7 Pro has entered the premium territory in terms of pricing. So, Xiaomi has introduced “Flagship Killer 2.0” at a much lower price. 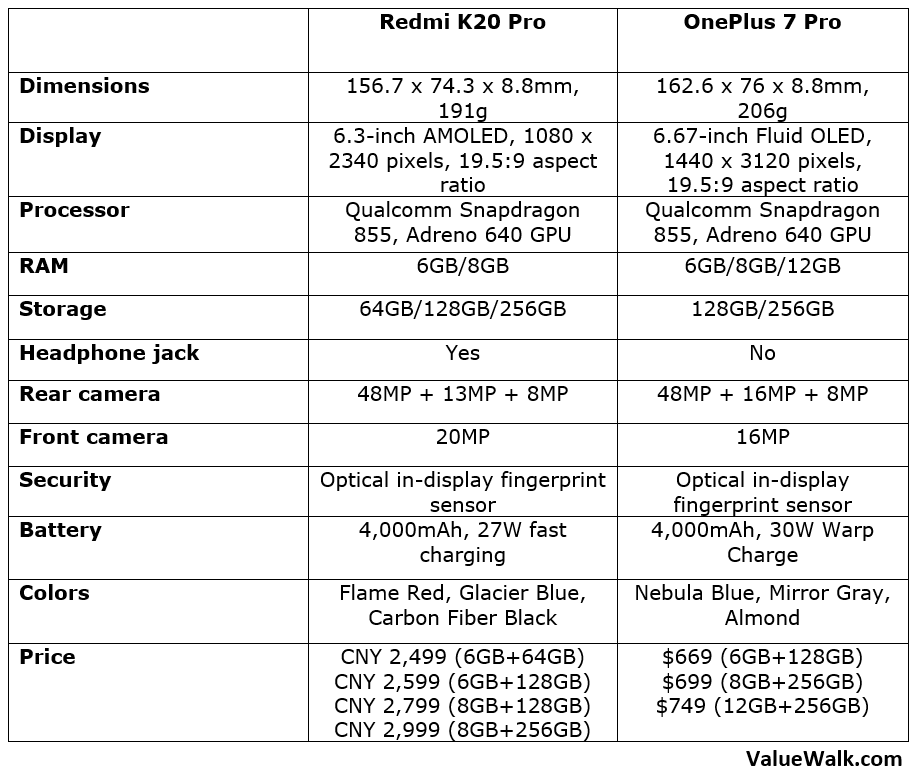