With the launch of the OnePlus 7 series, the Chinese company has done something different to strengthen its foothold in the premium smartphone segment. It has launched a OnePlus 7 Pro along with the standard OnePlus 7. The Pro device brings many firsts for the company, and aims to compete directly with Samsung’s flagship Galaxy S line. Here’s the detailed OnePlus 7 Pro vs Galaxy S10 Plus comparison to help you decide which one is a better buy.

The OnePlus 7 Pro has everything it needs to compete with the best and most expensive smartphones out there. But the device has breached the premium territory in terms of pricing. Since its inception, the Chinese company has positioned its devices as “flagship killers,” offering high-end specs at affordable prices. But things are changing with the OnePlus 7 Pro.

Both devices boast a gorgeous design. Just like Galaxy S10 Plus, the OnePlus 7 Pro has curved glass panes on both front and back. The 7 Pro’s front and rear glass panels are supported by a metal frame in the middle. Samsung has used an aluminum frame. Both devices get stereo speakers to enhance the audio experience.

The OnePlus 7 Pro comes in Mirror Gray, Nebula Blue, and Almond color options. Samsung has launched the S10 Plus in Flamingo Pink, Prism Blue, Prism Black, Prism White, Ceramic White, and Ceramic Black colors. The rear panel of both handsets is protected by Corning’s Gorilla Glass 5. The display of both phones has Corning Gorilla Glass 6 protection.

The OnePlus 7 Pro lacks the 3.5mm audio jack and an IP rating for water resistance, but it does offer splash resistance. It also lacks the SD card slot for external memory. In contrast, the S10 Plus has a 3.5mm headphone jack, a microSD card slot with support for up to 512GB of external storage, and an IP68 rating for water- and dust-resistance. These are the design elements where the S10 Plus comes out at the top.

Both phones feature an OLED screen and they both have received the highest rating from the testing firm DisplayMate. You can’t go wrong in terms of the display with either device. The OnePlus 7 Pro offers 90Hz refresh rate, which makes for a faster and smoother gaming experience.

The S10+ offers slightly better viewing angles and colors, but the OnePlus 7 Pro isn’t far behind.

There are a lot of similarities between the two phones when it comes to hardware specifications. They both run Qualcomm’s mighty Snapdragon 855 processor with Adreno 640 graphics processor. In Europe and many other markets, Samsung sells the Galaxy S10 Plus with its in-house Exynos 9820 chipset and Mali-G76 GPU, which is nearly equally powerful.

The Galaxy S10 Plus packs a 4,100mAh battery with 15W fast charging and 15W fast wireless charging support. Samsung has also added the Wireless PowerShare technology, which lets you charge other compatible devices and accessories by putting them on the back of S10 Plus. The battery is large enough to last a full day of normal usage. It supports both USB-C and Qualcomm Quick Charge power delivery.

The OnePlus 7 Pro gets a 4,000mAh battery with the company’s proprietary Warp Charge 30 fast charging technology. Unlike S10 Plus, it lacks wireless charging and Wireless PowerShare technologies. The faster 90Hz refresh rate and the pop-up selfie camera mechanism are going to consume a bit of extra power. It charges via a USB-C port.

Both phones run Google’s latest Android 9 Pie software, but there is a big difference in their user interface. The OnePlus 7 Pro gets the company’s OxygenOS 9.5 skin on top of Android Pie. It’s pretty close to the stock Android experience. There is little learning curve involved when using OxygenOS. The user experience is also fast and smooth.

The S10 Plus runs Samsung’s new One UI skin, which is fast and intuitive but carries a lot of legacy features. The experience is not as clean as the OxygenOS. The One UI software displays content in the top half and navigation options near the bottom of the screen to ensure that they are within the reach of your thumb.

Both phones have a similar camera setup on the rear. The OnePlus 7 Pro gets a 48-megapixel main camera with f/1.6 aperture and OIS; a 16-megapixel ultra-wide angle lens with 117-degree field of view and f/2.2 aperture; and an 8-megapixel telephoto sensor with f/2.2 aperture, OIS, and 3x optical zoom. For selfies, it gets a 16MP pop-up camera that comes up whenever needed. The phone is capable of recording 4K videos at 60fps.

The Galaxy S10 Plus has three lenses on the back and two on the front for selfies. The main camera setup consists of a 12MP wide-angle lens with variable apertures and OIS; a 12MP telephoto lens with f/2.4 aperture and OIS; and a 16MP ultra-wide angle lens with f/2.2 aperture. It delivers excellent results in both bright light and low-light conditions.The S10 Plus uses a 10MP wide-angle sensor with f/1.9 aperture and an 8MP depth sensor for selfies.

The S10 Plus has a clear edge when it comes to taking selfies. But the OnePlus 7 Pro’s 8MP telephoto lens offers 3x zoom compared to 2x on the S10 Plus.

This is where you’ll notice the biggest difference between the two phones. The Galaxy S10 Plus is an expensive phone. It costs $1,000 for the base model with 8GB RAM and 128GB storage. The 8GB+512GB model has been priced at $1,250. The highest end 12GB+1TB version costs a staggering $1,600

The OnePlus 7 Pro is as good as Galaxy S10 Plus in almost every aspect. Its lower price is going to attract a lot of buyers, but it misses out on some key features. For instance, it doesn’t have the S10 Plus’s IP68 rating for water-resistance. Its internal storage maxes out at 256GB and there is no external storage. It also lacks wireless charging and reverse charging. There is no headphone jack either. If you can live without these features, the OnePlus 7 Pro is the best Android phone in the market right now. 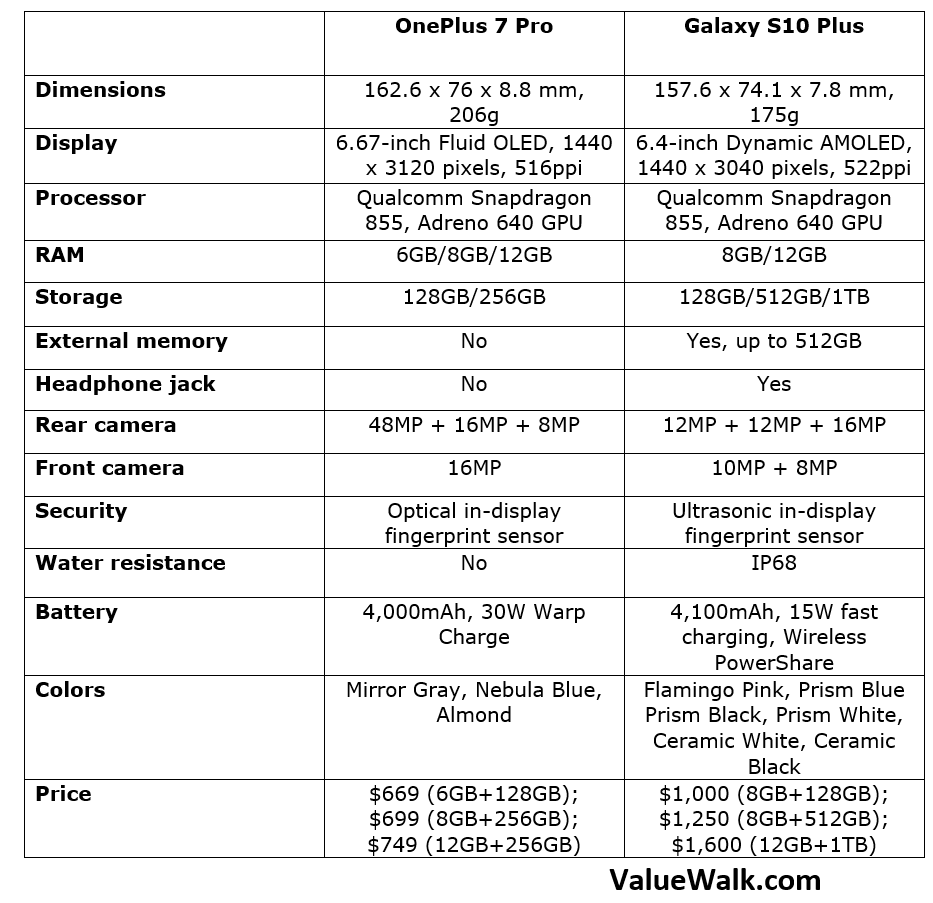