Gaming smartphones tend to be expensive because they require insanely powerful hardware. However, Asian vendors such as Xiaomi, ZTE Nubia, and Asus have made premium gaming phones accessible to the masses by making them affordable. ZTE has just launched its new Nubia Red Magic 3 gaming phone at an event in China. It will compete directly with the Xiaomi Black Shark 2, which was introduced in March. Here we compare the two phones in terms of display, price, and specs to help you decide which one is a better buy.

The Red Magic 3 measures 171.70 x 78.50 x 9.65mm and weighs 215g. It comes in Flame Red, Blue, and Black color options. It has speakers on both sides for stereo surround sound experience. It has 4D customizable vibrations. The phone has a diamond-shaped fingerprint sensor and a single camera lens on the back. The rear panel also has a customizable RGB lighting strip.

The Nubia gaming phone has thick bezels at the top and bottom, which means there is no display notch. The bezels house the dual-speaker setup and make it easier to hold the phone when playing games. It retains the 3.5mm headphone jack. There are three hardware buttons for gameplay. There are also rear pins to let you connect additional accessories. It also comes with an IP55 rating for water resistance.

The Xiaomi Black Shark 2 measures 163.61 x 75.01 x 8.77mm and weighs 205g. It comes in Black, Silver, and Blue color options. It has a pressure-sensitive display that allows users to map the buttons to the sides of the screen for comfortable gaming. It has no display notch, meaning you’ll see thick bezels at the top and bottom. It lacks water resistance.

The Black Shark 2’s design is not only a head-turner, but also durable. Some parts of the rear panel are made out of glass, but most of it is metal with an anodized finish. Durability tests conducted by JerryRigEverything showed that it can easily withstand scratches. It has an under-display fingerprint sensor, which worked flawlessly even after JerryRigEverything scratched the screen.

The Nubia Red Magic 3 gets a giant 6.65-inch AMOLED display, which delivers an immersive gaming experience. It has a 1080 x 2340 pixels resolution and 19.5:9 aspect ratio. It supports HDR and DC gaming, and 430 nits of brightness. It has a 388ppi of pixel density. The display offers 90Hz refresh rate to enhance the gaming experience.

The Black Shark 2 sports a slightly smaller 6.39-inch AMOLED display with Full HD+ resolution of 1080 x 2340 pixels. It has a 19.5:9 aspect ratio and 403ppi of pixel density. The screen is protected by Corning’s Gorilla Glass 6.

A gaming phone without powerful hardware is meaningless. Neither phone disappoints in this department. The Red Magic 3 runs Qualcomm’s latest Snapdragon 855 chipset with Adreno 640 GPU. It comes in three different RAM options of 6GB, 8GB, and top of the line 12GB. It runs Android 9 Pie software with Nubia’s custom Redmagic OS V2.0 skin.

There are three different storage options of 64GB, 128GB, and 256GB. It lacks external storage. If you are interested in buying it, purchase the highest storage variant you can afford. The Red Magic 3 packs a monstrous 5,000mAh battery with 30W fast charging support. Nubia claims the phone allows for one hour of gameplay in just 10 minutes of charging.

The Red Magic 3 features a liquid cooling tube with a powerful internal fan that lowers the phone’s temperature by 16 degrees Celsius. It prevents the phone from overheating even while playing the most demanding games. The fan speed is adjustable, and it consumes less than 1% battery power in one hour of continuous use.

Xiaomi has used direct touch multilayer liquid cooling system to prevent the device from overheating during gameplay. It packs a relatively smaller 4,000mAh battery with 27w Quick Charge 4.0 fast charging technology. The Black Shark 2 has a dedicated switch to launch Shark Space, a deep clean mode that frees up resources to make your gaming experience smoother. It also has a “Ludicrous” mode that allocates more processing power to games.

Most people think camera is not that important on gaming phones. But both these phones have pretty good camera specs. The Nubia Red Magic 3 has a 48-megapixel main camera with f/1.7 aperture. It is capable of recording 8K videos and can capture super slow-motion footage at up to 1920fps. On the front, it gets a 16-megapixel selfie snapper with f/2.0 aperture.

The Black Shark 2 sports dual cameras on the back. It gets a 48MP primary lens with f/1.8 aperture and a 12MP telephoto lens with 2x optical zoom and f/2.2 aperture. On the front, it gets a 20-megapixel selfie camera with f/2.0 aperture. 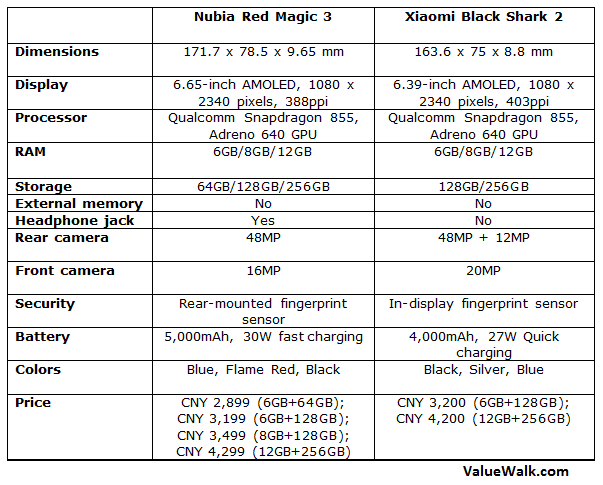