Just days after Google terminated Huawei’s Android license, the Chinese company’s sub-brand Honor has launched its new Honor 20 series of phones. The new lineup is not to be confused with Honor View 20, which arrived only a few months ago. The Honor 20 series consists of the standard Honor 20, a lower-specced Honor 20 Lite, and a top of the line Honor 20 Pro. The Honor 20 Pro offers premium specs at an affordable price, just like OnePlus 7 Pro. Let’s check out how the Honor 20 Pro stacks up against the OnePlus 7 Pro, which arrived only a few days ago.

Both smartphones have a beautiful design. The Honor 20 Pro has a metal and glass body. On the front panel, it has a nearly bezel-less display with a tiny hole in the top left corner to house the selfie camera. Similar to Samsung’s Galaxy S10E, it has a side-mounted fingerprint reader for authentication and security.

Its rear panel has three layers of glass, color, and depth implemented using a 3D Triple Mesh technology to give it a gradient effect. The rear panel is curved on the sides. The phone measures 154.6 x 73.97 x 8.44 mm and weighs 182g. It gets a USB-C port for charging and other purposes, but lacks the 3.5mm headphone jack. The device comes in Phantom Blue and Phantom Black colors.

The OnePlus 7 Pro also has curved glass panes on the front and rear, supported by a metal frame in the middle. It offers stereo speakers to enhance the audio experience. On the front, it has a truly bezel-less design with no notch or hole for the selfie camera.

OnePlus has used a motorized pop-up mechanism for the selfie camera, which pops up whenever you need to take selfies or make video calls. The pop-up module can retract itself in the event you accidentally drop the phone. The device features an optical in-display fingerprint sensor, which is insanely fast and convenient.

Huawei’s device features a 6.26-inch LCD screen with a Full HD+ resolution of 2340 x 1080 pixels. It has a 19.5:9 aspect ratio. The screen is curved on the sides. It also has a circular cutout in the top left corner for the selfie camera. Though there is a thin chin at the bottom of the screen, the company claims it has a 91.7% screen to body ratio.

Both devices pack premium hardware specs. The Honor 20 Pro runs Huawei’s in-house HiSilicon Kirin 980 chipset paired with Mali-G76 graphics processor. It’s as powerful as the Qualcomm Snapdragon 855 chipset found inside the OnePlus 7 Pro. Huawei has launched the Honor 20 Pro with 8GB RAM and 256GB of internal storage. There is no microSD card slot for external memory.

The Honor 20 Pro features a proprietary graphene sheet cooling technology to prevent it from overheating while playing demanding games. When you play high-end games, it automatically switches to the Epic graphic settings to ensure smooth gaming sessions.

The OnePlus 7 Pro runs the most powerful Qualcomm processor available to Android vendors. The Snapdragon 855 chipset is paired with Adreno 640 GPU. It comes in three different RAM and storage options, but lacks external storage. There is a 6GB RAM variant with 128GB storage, an 8GB RAM model with 256GB storage, and a top of the line 12GB RAM version with 256GB storage. It’s the world’s first phone to use the new UFS 3.0 storage technology.

The Honor 20 Pro packs an impressive 4,000mAh battery with 22.5W fast charging. Huawei claims the fast charger delivers up to 50% charge in just 30 minutes. It lacks wireless charging. The battery should easily last a full day of normal usage.

The OnePlus 7 Pro also features a 4,000mAh battery, but it’s accompanied by a 30W Warp Charge 30 technology. Both devices charge via a USB-C port. The OnePlus 7 Pro’s faster 90Hz refresh rate, the larger display, and the pop-up selfie camera mechanism are going to consume some extra battery power.

This could prove to be a major challenge for Huawei. The Honor 20 Pro runs the Magic UI skin on top of Android 9 Pie. However, there is a lot of uncertainty over software updates, security patches, and the availability of Google apps on the phone.

Last week, US President Donald Trump passed an executive order restricting US companies from supplying hardware, software, and services to Huawei. As a result, Google has canceled Huawei’s Android license.

The Chinese company will continue to have access to the open source version of Android. It’s also developed its own operating system to rival Android. But there is no guarantee whether Google apps such as Maps, Chrome, Gmail, Search, and YouTube will be available on the Honor 20 Pro in the future. Also, the phone is unlikely to get the future Android versions such as Android Q or Android R.

The OnePlus 7 Pro runs a custom OxygenOS 9.5 skin on top of Android Pie. OnePlus is known for releasing timely software updates and security patches. The OxygenOS is pretty close to the stock Android with a fast and smooth experience. It also has features like Smart Boost and Gaming Mode to deliver better performance while preserving battery life. The OxygenOS also brings background optimization to keep the phones running fast even when they get older.

Both smartphones have excellent photography capabilities. Camera testing firm DxOMark has given the Honor 20 Pro a score of 111, same as the OnePlus 7 Pro. The Honor flagship gets a quad camera setup on the back while the OnePlus 7 Pro features triple cameras.

The Honor 20 Pro sports a 48MP primary lens with f/1.4 aperture and four-axis OIS; a 16MP ultra-wide angle lens with f/2.2 aperture; an 8MP telephoto lens with f/2.4 aperture and four-axis OIS; and a 2MP macro sensor to add more detail to pictures. The 8MP telephoto lens is capable of producing 3x optical zoom, 5x hybrid zoom, and 30x digital zoom. The phone has a 32-megapixel camera on the front for selfies.

The OnePlus 7 Pro camera is equally impressive. It gets a 48-megapixel main camera with f/1.6 aperture and OIS; a 16-megapixel ultra-wide angle lens with 117-degree field of view and f/2.2 aperture; and an 8-megapixel telephoto sensor with f/2.2 aperture, OIS, and 3x optical zoom. It is capable of recording 4K videos at 60fps. For selfies, it gets a 16MP pop-up camera that comes up whenever needed.

Honor has priced its new flagship at €599 in Europe. It is expected to go on sale in European markets in June. The phone is scheduled to launch in India on June 11. Don’t expect it to arrive in the US.

Both the Honor 20 Pro and OnePlus 7 Pro are equally powerful phones with excellent cameras. They both lack wireless charging and headphone jack. But the OnePlus 7 Pro gives you a far superior display and an assurance that you’ll get timely software updates. 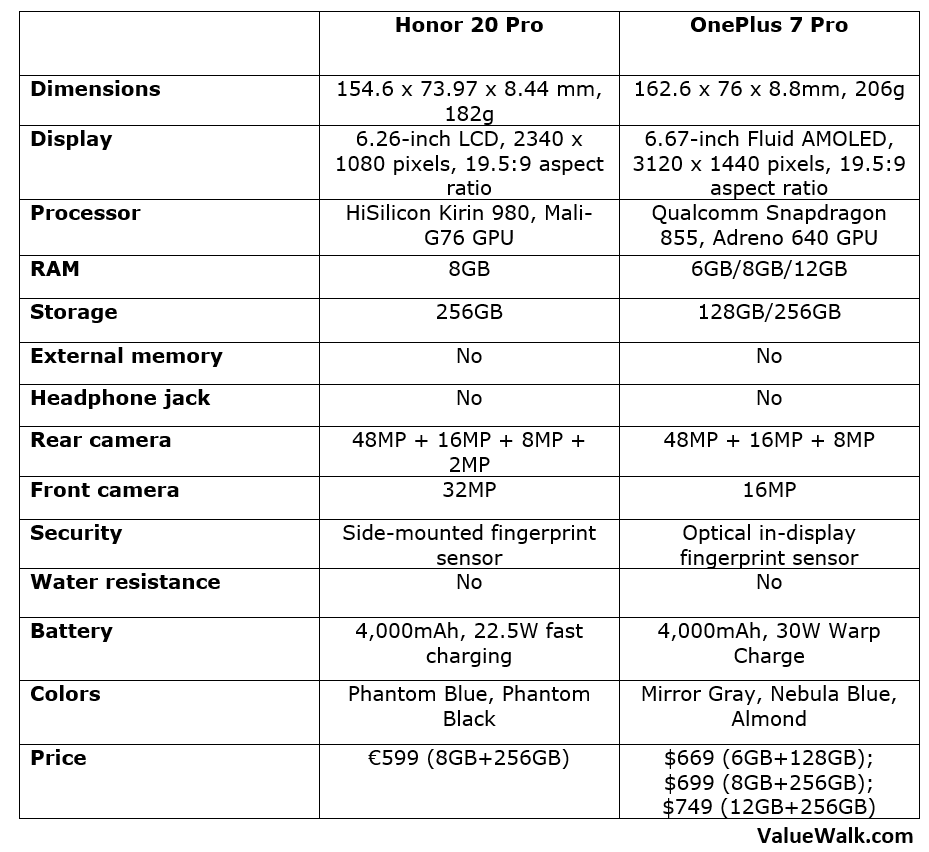