At its I/O Conference, Google launched the Pixel 3a and Pixel 3a XL handsets to attract customers who can’t afford the premium Pixel 3 and Pixel 3 XL devices. The latest mid-range offerings retain a lot of things from their premium siblings while dramatically bringing down the price. Here we compare the Google Pixel 3a XL with the Pixel 3 XL to see which one is a better buy.

The rear panel of the two devices looks almost identical with a dual-tone finish, a circular fingerprint sensor, and a single camera. On the front, the new 3a XL has ditched the display notch, which means it has thick bezels at the top and bottom of the screen. Last year’s Pixel 3 XL has a notch to accommodate the selfie camera and ear speaker.

The last year’s model offers an IP68 rating for water- and dust-resistance. The new mid-range handset lacks the IP68 rating. Instead, it comes with splash and dust resistance. The Pixel 3a XL has a polycarbonate body, which feels a bit cheap but makes the device light. The Pixel 3 XL has a gorgeous glass back to facilitate wireless charging, which is missing from the 3a XL.

The Pixel 3 XL sports a 6.3-inch pOLED display while the budget-friendly Google Pixel 3a XL gets a 6-inch gOLED display. Both of them are OLED panels, meaning they offer vibrant colors. The Pixel 3 XL has a display notch, which may turn off some buyers.

The Google Pixel 3a XL runs Qualcomm’s mid-range Snapdragon 670 processor with Adreno 615 GPU. It packs 4GB RAM and 64GB of internal storage. The device lacks external storage, though Google offers free cloud storage of photos and videos via Google Photos. The processor is powerful enough for day-to-day tasks, but not the best option if you play high-end games on your phone.

The 3a XL retains the Titan M security chip that we’ve seen on the Pixel 3 XL, but has done away with the custom Pixel Visual Core. Just like Pixel 3 XL, the new phone supports AR Core framework for augmented reality and the Active Edge technology, which allows users to summon Google Assistant by squeezing the device.

The Pixel 3 XL runs last year’s Qualcomm Snapdragon 845 processor paired with Adreno 630 graphics processor. You won’t experience any lag on this device even while playing demanding games. The Pixel 3 XL packs 4GB RAM and 64GB or 128GB of internal storage. There is no microSD card slot for external memory.

While the Pixel 3a XL users can save photos and videos in Google Photos in high quality, the Pixel 3 XL users can save them in their original resolution. Both handsets run the Android 9 Pie software out of the box. Google has promised at least three years of software updates and security patches on both.

The camera is the biggest strength of Google’s Pixel phones. The Pixel 3a XL gets the same 12.2MP rear camera as the premium Pixel 3 XL. It offers f/1.8 aperture, OIS, EIS, and 76-degree field of view. It is capable of recording 120fps videos at 1080p and 30fps videos at 4K.

On the front, the Pixel 3 XL has dual cameras accommodated in the notch. It consists of an 8MP wide-angle lens with f/2.2 aperture, 97-degree field of view; and an 8MP regular lens with f/1.8 aperture, 75-degree field-of-view, and phase detection autofocus. The 3a XL gets only a single 8MP lens with f/2.0 aperture on the front for selfies.

The Pixel 3a XL is loaded with the same AI smarts to enhance the photography experience as the Pixel 3 XL. They offer HDR+, Night Sight feature that enhances low-light photography, Top Shot, Portrait Mode, and Super Res Zoom. In short, the new Pixel phone brings the same camera as the premium Pixel 3 XL for people who can’t afford to spend upward of $900 on a phone.

Google has launched the Pixel 3a XL at $479 in the United States. It’s far cheaper than the Pixel 3 XL, which costs $899 for the 64GB storage version and $999 for the 128GB model. While the Pixel 3 XL is exclusive to Verizon, the Pixel 3a XL is available on Verizon, Sprint, T-Mobile, and US Cellular. You can also buy them through Google Store or retailers like Best Buy.

For nearly double the price, the Pixel 3 XL gets you water-resistance, wireless charging, an extra selfie camera, a higher resolution screen, and a more powerful processor. If you can live without these features, the Google Pixel 3a XL is an excellent device. 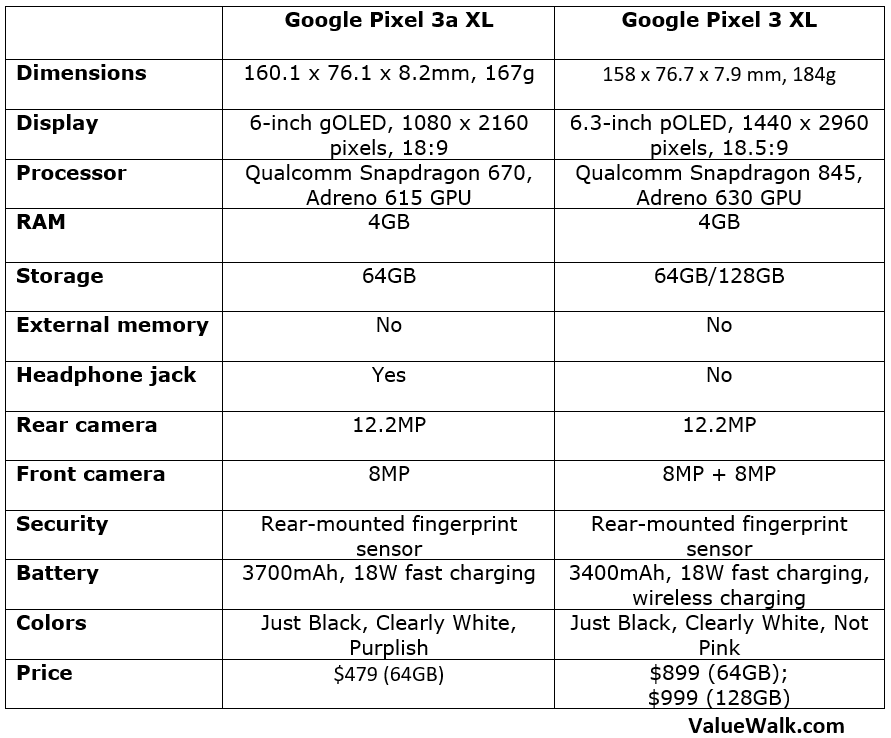