Google’s newly launched budget phones Pixel 3a and Pixel 3a XL are not in the same league as Apple’s iPhone XR, at least not in terms of pricing and performance. But for some reason, the new Pixel devices have drawn instant comparisons to Apple’s ‘affordable’ iPhone XR. So, let’s take a look at the Google Pixel 3a XL vs iPhone XR specs to see how the mid-range Google device stacks up against the iPhone XR.

Both the Pixel 3a XL and iPhone XR have made some hardware compromises to bring down the prices. Soon after unveiling the Pixel 3a series, Google placed a giant billboard in Washington DC mocking the ‘Phone X.’ The billboard shows off the Pixel phone’s edge in night light photography versus ‘Phone X.’ Google says its cheaper $399 Pixel 3a takes better low-light photos than ‘Phone X,’ which according to 9to5Mac was the iPhone XS.

Google wasting no time with the shade pic.twitter.com/euPAFTtlvr

Comparing two devices only in terms of night light photography and price doesn’t give you the full picture. So, let’s dive into a detailed one.

The iPhone XR has a more elegant design than the Pixel 3a XL, which is expected considering Google’s hardware design capabilities. The Pixel 3a XL has thick bezels at the top and bottom of the screen instead of a display notch. It brings back the 3.5mm headphone jack and features bottom-firing speakers.

Google has used a polycarbonate body on the Pixel 3a XL to cut costs, which feels a bit cheap but makes the phone lighter. It retains the dual-tone finish of its more expensive sibling Pixel 3 XL. The device measures 160.1 x 76.1 x 8.2mm and weighs 167g. It is available in Just Black, Clearly White, and Purplish colors.

The Pixel 3a XL has a single camera lens and a circular fingerprint reader on the back. It lacks an IP rating for water and dust resistance.

In contrast, the iPhone XR has a glass front and back supported by an aluminum frame in the middle. It has the same display notch as the premium iPhone XS and XS Max. The notch houses the selfie camera and sensors that support the Face ID facial recognition technology. It lacks a fingerprint sensor, relying entirely on facial recognition.

Unlike Pixel 3a XL, the iPhone XR supports wireless charging, thanks to its rear glass body. It lacks the 3.5mm audio jack but offers an IP67 rating for water and dust-resistance. The iPhone XR measures 150.9 x 75.7 x 8.3 mm and weighs 194g. Its overall footprint is smaller than the Pixel 3a XL. It comes in a bunch of different color options including Black, Red, Yellow, Blue, Coral, and White.

The Pixel 3a XL features a 6-inch gOLED display with Full HD+ resolution of 1080 x 2160 pixels. It offers HDR10 support and has an 18:9 aspect ratio. Google uses Dragon Trail Glass on the Pixel 3a XL for protection. It has a 76.3% screen-to-body ratio and 402ppi of pixel density. Considering the screen is OLED, it offers richer colors and better viewing angles than the iPhone XR.

The iPhone XR gets a 6.1-inch Liquid Retina Display. Though Apple didn’t disclose whether it has used Corning Gorilla Glass or something else for protection, it claims the iPhone XR display is coated with the “most durable glass ever.” It has a relatively lower resolution of 828 x 1792 pixels, 326ppi of pixel density, and 19.5:9 aspect ratio.

The iPhone XR display lacks HDR10 support but offers True Tone technology that automatically adjusts the display brightness and saturation depending on the ambient lighting conditions.

The iPhone XR has a clear edge here, even though it has a lower RAM. The Pixel 3a XL runs Qualcomm’s mid-range Snapdragon 670 processor with Adreno 615 graphics. The chipset is powerful enough for most day-to-day tasks, but it can’t match the iPhone XR’s A12 Bionic processor. The A12 Bionic has outperformed even the most powerful Qualcomm chip in benchmark tests.

The Pixel 3a XL packs 4GB RAM and 64GB of storage. There is no microSD card slot for external memory, but Google offers unlimited free cloud storage of photos and videos. Google has also added the Titan M security chip that we have seen earlier on the Pixel 3 XL. The Pixel 3a XL also supports AR Core framework for augmented reality. It offers the Active Edge technology which allows users to activate Google Assistant by squeezing the phone.

Google’s device packs a 3,700mAh battery with 18W fast charging, but it lacks wireless charging. Google claims the 18W charger delivers up to 7 hours of battery life in just 15 minutes of charging.

On the other hand, the iPhone XR packs a lower 3GB RAM and comes in three different storage options of 64GB, 128GB, and 256GB. Just like Pixel 3a XL, it doesn’t support external storage. Its TrueDepth camera supports not only Face ID but also new features like Memoji and Animoji.

The iPhone XR gets a 2,942mAh battery, which easily lasts a full day of normal usage. It supports 15W fast charging and Qi wireless charging. The fast charging method delivers 50% charge in just 30 minutes. Unfortunately, Apple ships the iPhone XR with a slower 5W charger. If you want to take advantage of fast charging, you have to buy a fast charger separately.

The Pixel 3a XL runs Google’s latest Android 9 Pie software. Google has promised three years of software updates and security patches on the device. It will be among the first phones to get the upcoming Android Q update. Google’s device has a lot of AI baked into it, and Google Assistant is far superior to Siri in almost every aspect. It also gets a call screening feature that screens against spam calls and telemarketers.

The iPhone XR runs Apple’s iOS 12 software and will be updated to iOS 13 later this year. While Android Pie has Digital Wellbeing, the iOS 12 offers Screen Time feature to let you monitor how much time you spend on your device and within individual apps. Both let you put daily usage limits on individual apps. Both operating systems are fast, secure, and intuitive. It boils down to which one you prefer.

Both handsets are among the best smartphone cameras despite featuring a single lens on the back. Camera testing firm DxOMark has assigned the iPhone XR and premium Pixel 3 the same score of 101. The Pixel 3a XL gets the same camera setup as the Pixel 3, so camera performance is nearly identical. Google’s AI algorithms give it a clear edge in certain scenarios.

The Pixel 3a XL has the same 12.2-megapixel rear camera as the more expensive Pixel 3 XL. It offers f/1.8 aperture, EIS, OIS, and a 76-degree field of view. It takes photos with excellent color reproduction and high dynamic range. It uses software to take portrait images with blurred backgrounds. It has an 8-megapixel selfie camera on the front with f/2.0 aperture.

The iPhone XR sports a 12-megapixel wide-angle lens on the back. It offers f/1.8 aperture, OIS, and phase detection autofocus. For selfies, it has a 7MP iSight shooter with f/2.2 aperture. Just like Pixel 3a XL, it is capable of taking HDR images. Neither device takes bad photos, but the Pixel 3a XL has the upper hand in low-light and portrait photography.

The Google Pixel 3a XL is far cheaper than the iPhone XR. It has been priced at $479 in the United States. The device is available on Verizon, Sprint, T-Mobile, and US Cellular. You can also buy them through Google Store or retailers like Best Buy.

The Pixel 3a XL will be among the first Android phones to get software updates. It takes incredible photos and has a superior display. Where it lags behind the iPhone XR is processing power, water resistance, wireless charging, and design. If you can do without these features, the Pixel 3a XL is an excellent buy at $479. 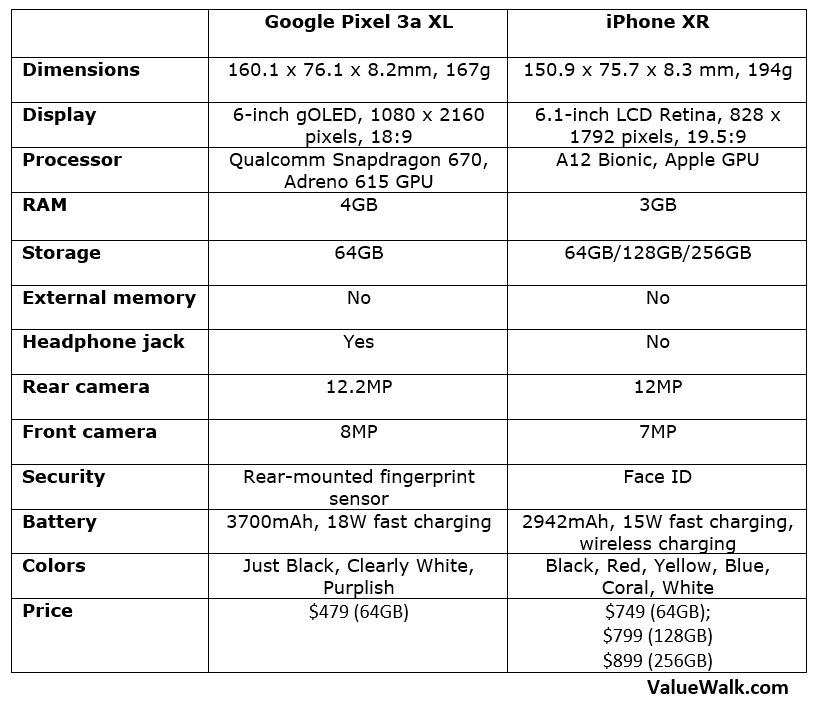