Global Allocation Fund commentary for the month ended April 30, 2019. This article was originally in Spanish and has been translated to English.

“Sell in May and go away.” – Popular saying

April has been another bullish month for the stock markets, especially for the European ones, in a trend that has not ceased to amaze us since the beginning of the year. We have seldom seen such a bull market, in an environment in which macroeconomic figures have been characterized by constant downward revisions of growth forecasts, and microeconomic figures by decreases in the expectations of profits, revenues, and reductions in margins of the companies. 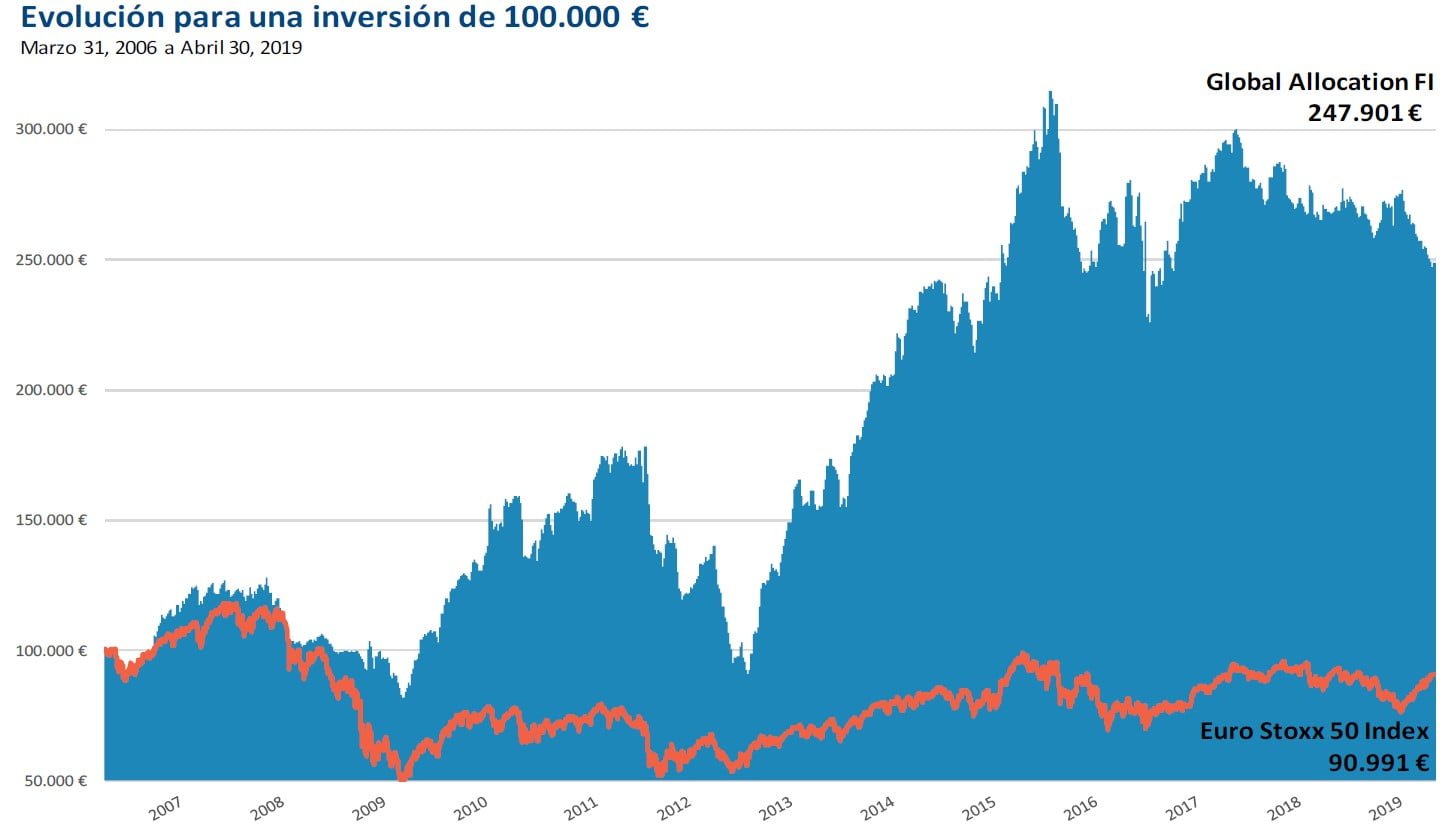 We can summarize that we erroneously value the effect of the huge buybacks of shares by the companies themselves, as we already advanced last month, as well as the "feeling" of the market that central banks "can not" drop the markets.

This last fact is more than certain, because as we pointed out in the special report we made at the beginning of the year, the "wealth effect" seems to have a much greater importance than has historically been given to it. Any more or less important fall will take us right to a recession, although the opposite is not so true. There can be a recession even levitating the markets with all kinds of measures, as we are actually seeing, more strongly in the countries that have taken their interventions in the markets farther. That is, Japan and especially Europe, where Germany, Italy, and France are already very close, are on the verge of recession.

We have also seen the improvement, albeit by very little, of the historical maximums in some US indices. UU., And as we were announcing, they have made us resign for the moment to continue with our bearish bets.

We remind you that we keep the same short positions since October of last year, where we fully hit the development of events, getting to be the few funds that ended the year in positive numbers. This fact gave us the confidence to increase the risk again at the beginning of the year, even more aggressively as we did at the end of last year, since everything seemed to indicate that our "road map" was being confirmed.

As the market took away our reason we reduced the risk again, and finally, at the beginning of this month, we finally closed our short positions. At least for the moment.

However, we have incorporated a type of position, based on options, that is, we have paid a premium that will be our maximum loss, and that can give us in principle benefit without any limit, depending on the events, in this case, in the fixed income markets. We have made this change, taking advantage of the virtual disappearance of volatility, that is, the cost of covering the contingencies that now prevail again in the markets, and we have done so in the fixed income, due to the timeframe that we have been able to carry out. operation, of two years, as to the differential between the cost, which is around 3% of maximum loss in that term at the most, and the benefit, that in case we succeed, could suppose between 25% and 50%, without also have risk in the event that the equity markets manage to overcome (as it seems they are doing) again their maximum.

To explain what our position is, and the meaning it has, we incorporate a historical chart (since 1996) with the difference between 2 and 10 year interest rates together with the evolution of the S&P 500. 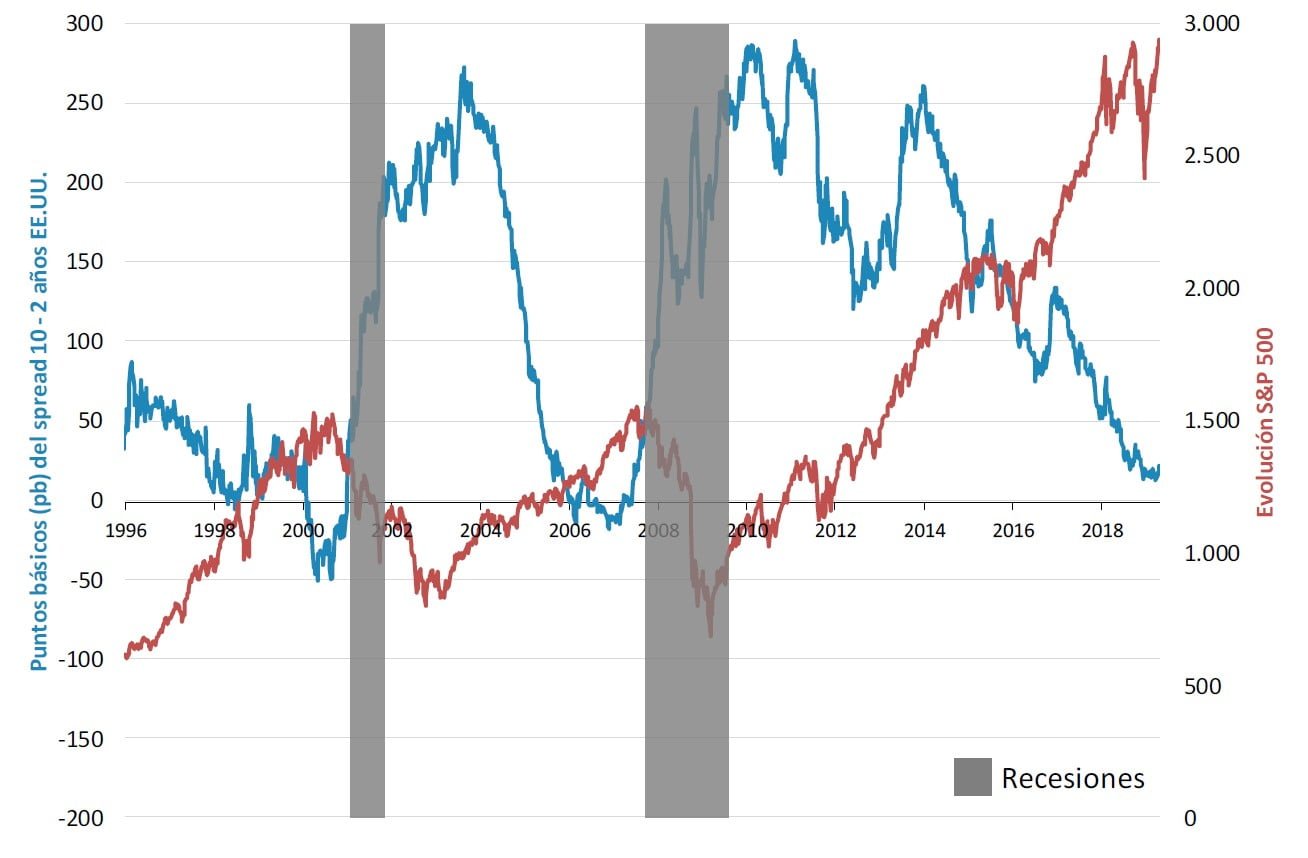 As you can see, before the imminence of a recession or crisis, the Federal Reserve (FED) lowers interest rates decisively, for now with the limit of 0% (to know if in the next they reach "European" levels of negative types, where we still find ourselves), to try to reactivate the economy.

In general, the markets have already anticipated this risk, and foreseeing that the rates can no longer rise, since this fact would cause the aforementioned recession, investors favor positions in long-term bonds (10 years) to guarantee higher returns while give this period of low rates again. This moment makes spreads on short and long-term bonds almost non-existent, or even negative. We are already at that moment, as you can see. 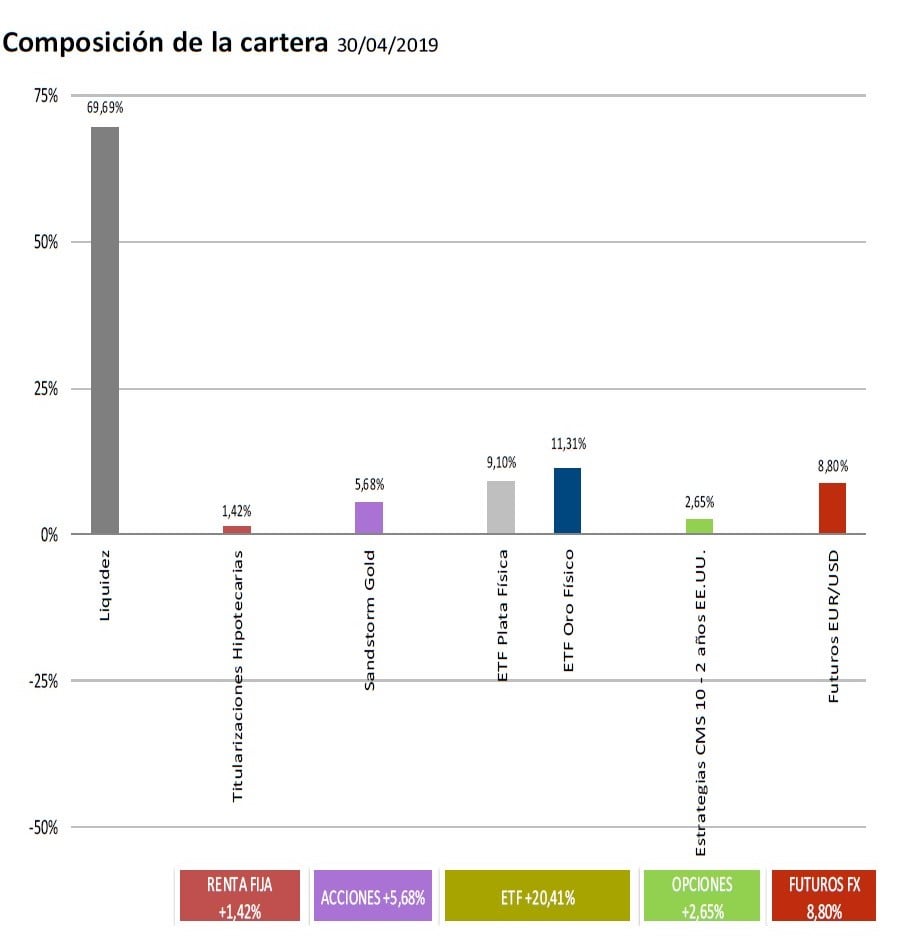 Once the FED lowers interest rates, there is a movement that increases again, usually a lot and in a very short space of time, the spreads of the interest rates back to more "normal" levels.

There are some studies (by the EDF itself) that even blame the crisis on the structure of the interest rate curve, since there is no difference between the short and long rates, they argue, discourage banks and investors to lend, for not having that "temporary bonus" in the value of money, which finally triggers the same recession.

In any case, and independently if it is the chicken or the egg, we think that we are in this final stage. (Even with the brilliant final figure of growth (3.6%) that we have seen for the North American economy, explained that for the most part by the increases in the inventories of the companies, more than in the increase of the demand of the consumers…).

To be specific, the options that we have bought start to give us benefits if the spreads of interest rates at 2 and 10 years rose above 50 and 100 bp, levels that as you can see in the graph are not at all outlandish. In fact, in case of reaching levels similar to those of the last occasions (which would also surprise us, although not much, due to the growing deficit that this situation would entail and the difficulty of financing it in the long term, which can be even revolting to achieve even greater differences), our results can be quite superior to those previously mentioned. 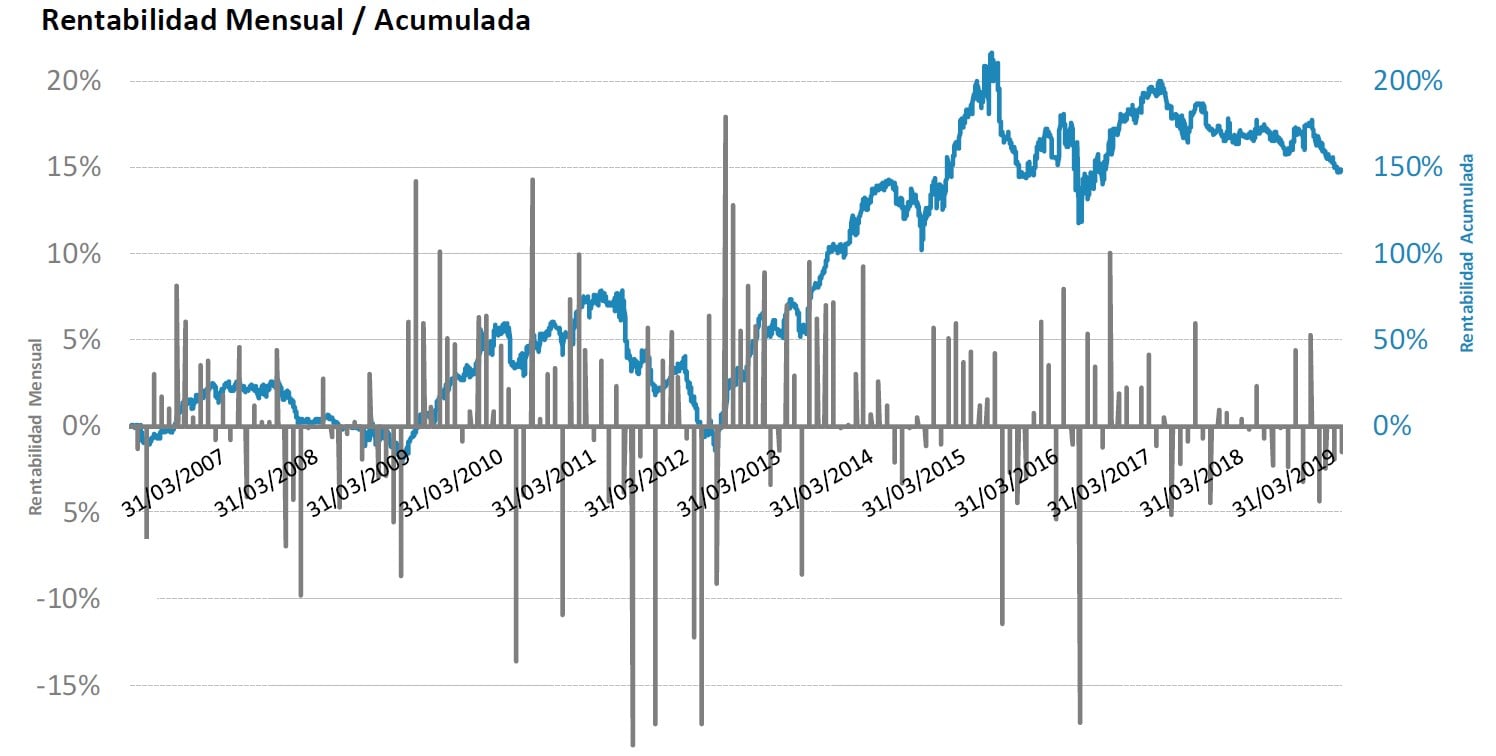 Undoubtedly, and if possible, we will also try to improve this result when we see again that the conditions favor the taking of short positions again, although we will do so with caution. As we have said on some other occasion, bear markets are generally quite difficult to manage. 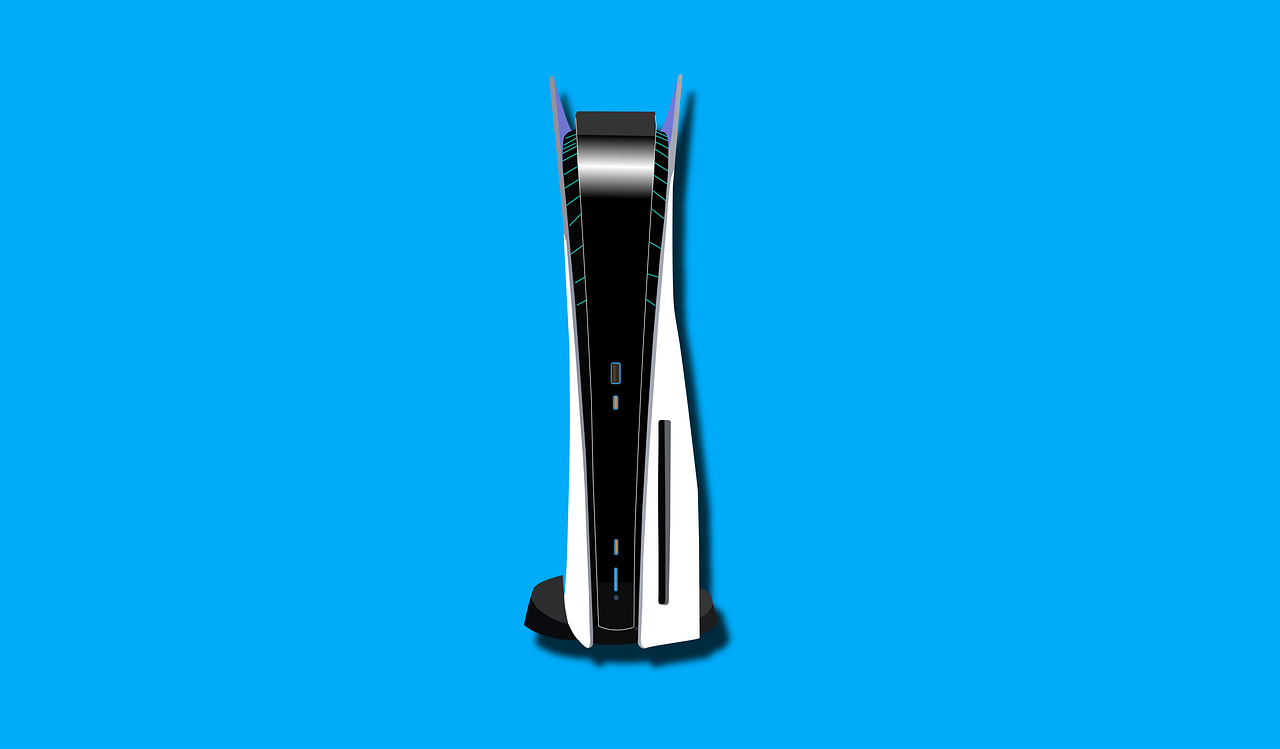