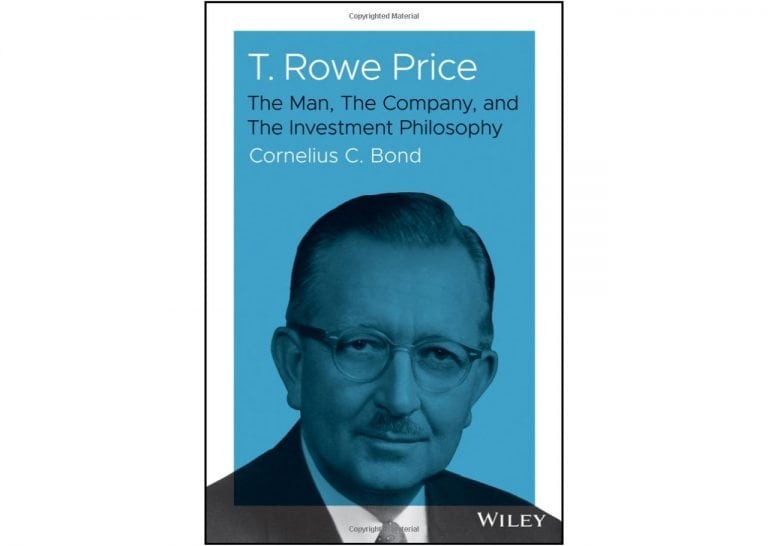 Excerpted with permission of the publisher, Wiley, from T. Rowe Price: The Man, The Company, and The Investment Philosophy by Cornelius C. Bond. Copyright © 2019 Cornelius C. Bond. All rights reserved. Available wherever books and eBooks are sold.

In 1965, Mr. Price published a list of seven growth stocks that he had bought and held since the 1930s and 1940s. All had remained growth stocks over this entire time period, and all proved to be outstanding investments: DuPont, Black & Decker, 3M, Scott Paper, Merck & Co., IBM, and Pfizer. Their average appreciation had been thirty-six times. He understood that no one could be 100 percent right in picking growth companies, but he believed that results would be “spectacular” if you were just 75 percent correct. According to the records of his model accounts, his own performance in selecting growth stocks was better than 80 percent over his lifetime of investing. He both bought and sold stocks gradually over years, at prices based on what he felt the shares were worth. Selling a company completely was done only after he became convinced that it was no longer a growth stock. His expected holding period for any investment was measured in decades. By gradually buying and selling at calculated prices, the exact timing of purchases and sales was not an issue.

T. Rowe Price: The Man, The Company, and The Investment Philosophy by Cornelius C. Bond

One of the most important concepts underlying the Growth Stock Theory of Investment is the study and understanding of life cycles, both the life cycles of industries and of individual companies. When he was first developing the Growth Stock Theory, Mr. Price also called it “The Life Cycle Theory of Investing” as he outlined in his Barron’s article of May 15, 1939. He noted that companies go through a life cycle similar to the human life cycle. Both have three important phases: growth, maturity, and what he termed “decadence.” In the May 22, 1939, Barron’s article, he states there is a well-understood risk of a decline in health when one reaches maturity, and much more toward the end of life. Insurance companies understand this and demand a higher premium to insure the life of a person fifty years old than they do for one who is twenty-five, and an even higher fee at seventy-five. In much the same way, Mr. Price noted in the 1939 Barron’s series that common sense indicates that investment in a business offers more gain and less risk while the earnings are growing strongly than when they reach maturity and decline. Often, however, the decline can be masked by a rising business cycle and be hard to detect.

“It is easy to grow in a fertile field,” he wrote in the June 5, 1939, Barron’s, “whether a seed of corn or a company. Just as weeds will impede the growth of the corn, so will competition impede a company.” A fertile field is free of intense competition and such impediments as government interference. “No matter how good the farmer and how hard he works,” he said, “his output and his profits are limited if the soil is thin and rocky.”

It was important to continually monitor the fertility of the entire field and not just the results of an individual company. An early warning sign can be a decline in growth of an industry’s dollar volume, particularly if unit sales are still rising. This would indicate that the price per unit was falling and a sign of lower profitability for the companies participating in the industry.

Because of his emphasis on management, Mr. Price continued throughout the time that he ran T. Rowe Price and Associates to require that all companies in which the firm invested be physically visited at least once by a firm analyst before making an investment, and on at least an annual basis thereafter. This practice is generally maintained to this day at the company. During this visit, the analyst should meet several members of management, including, if possible, the chief executive officer, in order to discuss the company’s outlook and to assess the management team.

Assessing management is not easy. It takes a lot of experience and exposure to many different management styles and practitioners. A stock analyst needs a good ear. How are the analyst’s questions answered? With perception and understanding, or is it a canned response? How thoughtfully does the CEO present the company’s projected growth in terms of product life cycles, financials, people, and material resources? If this is not a first visit, how had management met its prior forecasts in terms of product introduction and projected unit and dollar sales? What is the competition doing that might threaten the company’s position and what is management doing in response?

Growth companies can arise in new dynamic industries, in an old company with a major new   vigorously growing product, or through a change in management. A growth company can also be a specialty company, outside of any single industry, like 3M, which produces a great variety of unique innovative products for many markets.

The second important financial criterion for judging whether a company is a good investment, after growth of sales, is its return on invested capital. DuPont was the pioneer in developing this concept, and it was a major factor in its success. Most companies in the 1930s – and even today – measure profitability by their profit margin, or how much money they make, after all expenses are deducted, on each dollar of sales. This is a good way to compare companies in the same industry, but it can’t determine how much a company is really earning, how fast it can grow, or how long it can stay in business.

For example, when shopping for a savings account, the most important factor is the annual return, assuming equal financial strength of the institution. A 4-percent savings rate would be better than 3 percent, all things being equal. In a similar vein, managers at DuPont were required for many years to undertake only those projects that would earn 20 percent or better on the estimated required capital. This limited the company’s focus to the few projects that could meet this high hurdle rate, and it adequately allowed for the inherent risks of any new project that could involve many millions of dollars of up-front capital and marketing costs.

Another reason for the 20-percent return was subtler. If DuPont earned a 20-percent return on its invested capital after taxes, it could grow its plant and equipment at a 20-percent rate, which, in turn, would support a 20-percent growth in sales. Even after paying out a comfortable dividend, DuPont could easily sustain a 15-percent rate of sales growth without borrowing any money. This is twice the minimum return that Mr. Price hoped for a portfolio of growth stocks. Many fast-growing, otherwise successful companies have spun into bankruptcy because they did not pay attention to this important metric. They hit their sales targets but ended up drowning in a sea of debt because of an inadequate return on capital.

Finally, the focus on a 20-percent return kept DuPont continually looking for profitable new products and businesses that would continue its rapid growth in sales and earnings into the future. From the firm’s research and development, old, maturing businesses and products were constantly being replaced with exciting new emerging stars. DuPont at 122 years old in 1920 would have felt much more dynamic to the young chemist than the eight-year-old Fort Pitt.