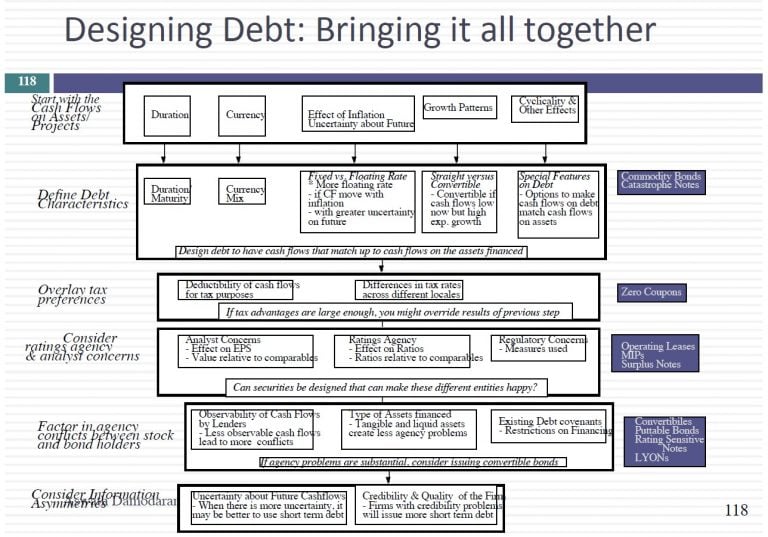 In this class, we looked at valuing private companies, starting by listing the key differences between public and private companies in information available. We then talked about why motive matters in private company valuation, and why the value attached to a private business can be very different for a private (undiversified) buyer, as opposed to a diversified investor. We also talked about adjusting cash flows for owner salaries and key person discounts. Finally, we examine the consequences of illiquidity for pricing/valuing private businesses, and looked at approaches to estimating an illiquidity discount.

So I hope you had a chance to start on your pricing right. Three weeks left of class. Things are going to start to pick up. The next quizzes a week from today. So I just want to put it out there. I would send you the quizzes quiz reviews so that you can get started if you want but be pretty much focused on pricing as the package too is going to be pretty much everything you need for the quiz. So by the end of today we'll be done with everything you need for the quiz which gives you at least know five or six days to get caught up. So I want to talk about value private businesses up to now. Every company every business I've valued has been a publicly traded company and it's convenient to value publicly traded companies because there are some assumptions we make that make life easier. So to set up the private company valuation. Here's my first question. Let's say of two companies they look exactly the same but one is no one is a private company or there's a publicly traded company same business same financial practices.

Which one would you expect of the higher cost to capital the private to the public. Tell me why.

Because the margin investors are diversified they have the same risk but two people looking at the same business can have very different perspectives on risk if the if the margin investors know we can jump to that conclusion if the major investors is not diversified. The cost of equity and the cost of capital is going to be higher. One of the things I'm going to talk about today is how to adjust the discount rate for the fact that some buyers are not diversified thing that's their problem. You might be in some private businesses where the only choice you have is to sell to somebody who's not diversified. You can talk about dental practices and medical practices and the way they get sold from one doctor one dentist to another. Second. One of the other issues we're going to talk about today that we've kind of avoided onto the class is the notion of liquidity.

So new ready a publicly traded company which is valued based on cash flows and discount rates and growth rates. We never stopped and asked the question should I care about liquidity or would private businesses. I'm going to argue that this is going to become front and center something that you have to worry about. So again I'm going to give you a choice of four private companies and ask which one of the four private for private transactions. And I'd like you to tell me which one of these you'd see the biggest illiquidity of this kind and which one you'd see the smallest. So the first is a profitable cash flow generating company to a long term buyer. Second it's profitable cash flow generating company to a cash constrained by the choice is profitable cash flow generating company was money losing company long term buyer of Bush's cash constrained bar. So let's start with the company to which one would expect the larger liquidity to discard of money making cash flow generating company the money losing company money losing company long term buyer or cash constrained by. Has already were laying the foundations for a very simple rule. You cannot have one discussion that cuts across every transaction to decide on the discount to attach to a private business. You need to know what kind of business you're selling and also who you're selling it to. So it's almost going to require customization of the discount. Let's make this even more messy. You think this comes very close. For instance if I was trying to sell my private business at the last quarter of 2008 the middle of one of the worst crises we've had in the last century as opposed to the first quarter of 2013 when things look much better. The discount would have been greater. In 2008 you'd have had a tough time Remigio had trouble placing commercial paper in October November of 2008. You're trying to sell a private business. The discount should vary across time. We've just made our life a lot miss messier when it comes to equity discussions because it's going to vary across companies vary across buyers and vary across time and whatever approach we come up with has to be flexible enough to allow us to do it.