Whitney Tilson’s email to investors discussing his analyst’s bull case on Tesla and what professional car reviewers think about the company’s cars.

My analyst’s bull case on Tesla

My analyst Kevin DeCamp has owned Tesla’s stock for nearly seven years and drives one. He sent me this and gave me permission to share it:

When people drive a Tesla (or ride in one), this tweet is their usual experience more often than not: 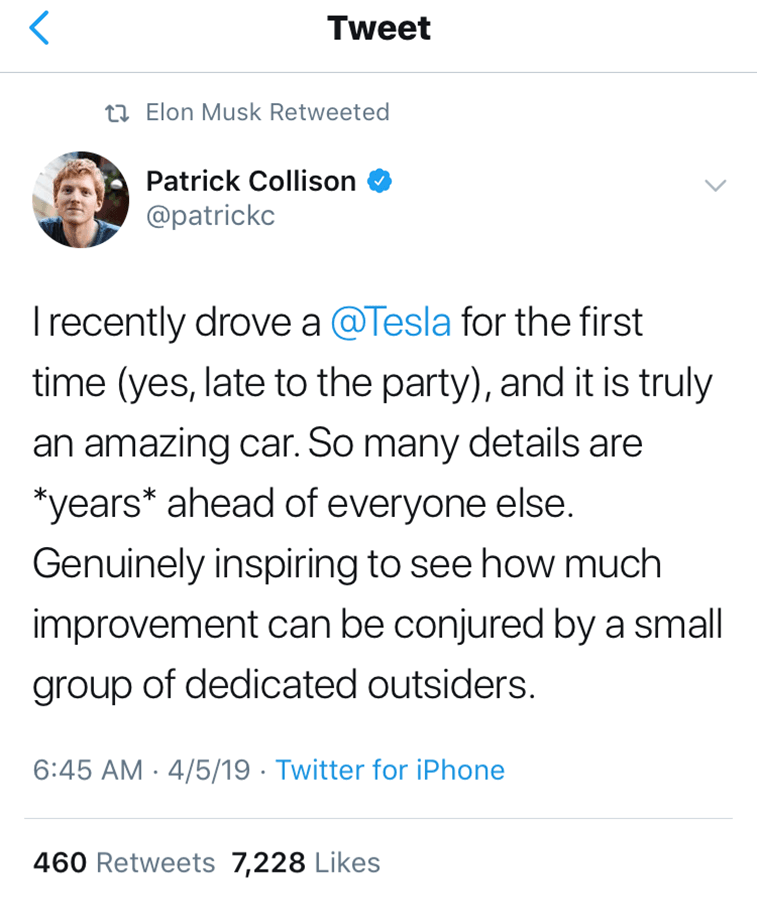 I think the two guys above are closer to the “average American” than the finance guys who are short Tesla. I admit without shame that buying a Tesla CHANGED my life!!

Tesla bears tend to dismiss such rave reviews, saying things like, “Oh, its screen is like an iPad glued to the dashboard, I heard it crashes all the time right? I like Audi and Porsche interiors because they are way more luxurious, etc.”

In other words they see what they want, confirming their bias.

I got news for you, the average American is not short Tesla nor knows what a balance sheet is. They actually just have an intuition that Tesla is cool, is the future, and there is NO way it could go bankrupt.

Many of Tesla’s critics are “car guys” who work in finance and/or drive a Porsche. This is the ultimate handicap for understanding what Tesla’s bring to the table. They are NOTHING like the average American. (Obviously “average American” is a very broad term. The typical “average American” couldn’t afford a Tesla although the Model 3 opens up a whole new market.)

I wouldn’t be caught dead in a Porsche (or a Mercedes, BMW, Audi) because I would feel like a douchebag and it’s just not me. However, I am 100% comfy driving a Tesla for some reason. I would like to think I am unique, but I believe many people feel the same way. After all, I traded in a Toyota for my Tesla and many people trade in Nissan, Honda, etc. cars (as well as BMW, Mercedes, and Audi) for Teslas, as Andrew Left has pointed out.

In the nearly 7 years that I have owned the stock, I have never seen the bears so confident – almost as if there is zero probability they are wrong. The markets tend to punish such hubris.

To summarize, this comment on Value Investors Club captures my feelings well:

I have never seen this level of consumer passion, and the only thing that comes close is Apple users thirty(?) years ago when they would suffer all sorts of inconveniences to use an Apple desktop computer.

As a short, my great fear is that somehow they can translate this extreme passion over time into a highly profitable brand, like Apple. Cars are different from computers, and I do not see how Tesla can pull it off, but this level of passion is worth something

The bear case is indeed extremely compelling. However, what if Tesla gets through its current problems (as it always seems to) and this passion continues to spread and is powerful enough to outweigh all the negatives?

1) I think this guy nails it. I'm a finance guy and think this is a terrible short. Even if it works it just seems like a shit way to make a buck. The bears never talk about the car being awesome and all the people that want one, myself included which should be the number one part of any bear thesis.

2) Have you driven one bro? is the Tesla bear running joke at this piont.

I’ve never felt better about the bear case reading this kind of stuff. Anecdotal stories about people that enjoy driving the car. No discussion on the size of the addressable market, how impractical these are for many people, the quality issues scaring people off, and Tesla’s horrific financials. Just a passionate following in the virtue signaling tech bro crowd. We get it.

3) Lol, you need a more forward-looking "analyst." Meanwhile, has he driven an I-Pace yet? [Kevin’s reply: I get a range anxiety attack just thinking about driving an I-pace or e tron ;).] Really? How far do you typically take your Tesla between charges/repairs? If you drove an i-Pace you'd realize how much nicer it is in all ways than any Tesla, and then you might take a minute to "analyze" that there are around 30 luxury EVs about to follow it. But then, that's not even necessary: just look at March and April S/X sales in Norway vs i-Pace/e-tron.

4) The fallacy in this reasoning is that those who get into a Tesla are not comparing it to what is currently available in the market today.  There are well over 300 different models available for sale in the U.S. car market today -- before getting into finer differences such as trim and engine options.

At least 80% of these cars are significantly better than anything that was on the road 6-7 years ago. But if you didn’t drive a good sample set of the cars that are in the market today, you wouldn’t know that.

What happens today is that any new car buyer who gets into a new car, loves it. It’s like getting a new computer, after the old one is a bit worn and bogged down.

Another thing that professional car reviewers know is that the premium brands -- BMW, Porsche, Mercedes, etc. -- are usually not any better than the “budget” brands anymore. Yes, they may be a little “fancier” but they don’t actually perform any better. They may even be more difficult to use.

All of them have Android Auto and Apple CarPlay as standard. Tesla? Has neither. The only automaker in the world that shuns Apple and Google. Some technology there!

It is certainly true that Tesla Model S, X and 3 drive very well. Steering, handling, and the kind of linear powertrain experience you find with any electric car -- are all very nice.

But ask any professional auto reviewer: How is this different from any other new car in the market today? The answer is: Not much. Some are a little better, some are a little worse -- but they are all, pretty good -- and all of them are meaningfully better than what was available in the market eight or ten years ago.

I can totally see the attraction of buying a Tesla for some people: I live in nice weather, I don’t have to worry about reliability, and I want to try something different. All of these factors conspire to provide an opening for a new product that offers something a little different. It’s virtue-signaling on steroids.

One of the key problems that Tesla will be running up against is that a car is, for the most part, a transportation device that you drive from A to B. What hurt the U.S. car industry starting in the 1970s, and accelerated all the way until only a handful of years ago, is that the reliability was lower than the competition from companies such as Honda, Toyota and Nissan.

Some people will tolerate a bit of lack of reliability if they get something special for it. However, if we have learned anything from the automotive business in the last 45 years, it is that lack of reliability not only kills the economics of the automaker, but also the patience of the consumer.

Don’t take my word for it. TrueDelta measures how many times a car is in the shop. Which car is the single worst of any car in the market today? Tesla Model 3. It is in the shop 468% more than the average new car: https://www.truedelta.com/Tesla-Model-3/reliability-1376

Notice that all the “But have you driven it yet?” arguments for Tesla rarely involves any blind tests against regular state-of-the-art cars, or any thoughts from professional car reviewers, whose jobs it is to drive *all* cars in the market today?

Yes, many or even most such professional car reviewers agree that Tesla -- Model 3 as well as the others -- are fun to drive, and have some strong attributes in some areas, but they will also tell you that most new cars in the market today hold their own pretty well, and are indeed better on many or most metrics. On top of all of those metrics is reliability, where Tesla is in 1992 Yugo territory on a good day.

Meanwhile, consider that the Jeep Gladiator is the hottest new vehicle to hit the North American market in 2019: https://www.thedrive.com/news/27294/2020-jeep-gladiator-looks-like-the-perfect-adventure-truck-in-these-fresh-renders

That’s a solidly profitable vehicle and not only doesn’t need any explicit ($7,500 tax credit) or implied (ZEV and GHG credits) subsidies in order to be profitable. It subsidizes every Tesla sold, and still manages to be strongly profitable.

Without government subsidies, Tesla sales would be 95% lower than it is today, in the applicable geographies.

PS—These comments are strictly from the consumer's viewpoint. Of course the financial issues are ultimately the most important.  However, I think your analyst is right when he said that the average American doesn't know what a balance sheet is.

He was also right when he said that some bears are too negative, totally dismissing any positive traits of a Tesla. The reality is that if you live in a mild climate (Coastal California), and you haven't (yet) experienced any service/reliability issue, you are likely to be very happy with your Tesla. Bears who don't recognize this, will be too bearish.

Meanwhile, as of today in Norway, Audi eTron plus Jaguar i-Pace continue to outsell Model X+S combined by a ratio of 5.5 : 1. Also, the Model 3 is down to 43 cars per day, down from 171 in March.