Almost every major Android vendor has either launched a 5G smartphone or plans to introduce one by the end of this year. Chinese brand Oppo has launched three devices in the Reno series including the Oppo Reno 5G. On the other hand, Samsung’s Galaxy S10 5G has already debuted in South Korea and will soon be available in the United States. Let’s dive into a detailed Oppo Reno 5G vs Galaxy S10 5G comparison to see which 5G phone is superior.

In terms of design, the Oppo Reno 5G is nearly identical to the Reno 10X Zoom model. It measures 162 x 77.2 x 9.3 mm and comes with a fully bezel-less design with no display notch. The Chinese vendor has managed to avoid the notch by using a “shark fin” pop-up selfie camera mechanism that slides up like a wedge from the top of the handset.

The “shark fin” structure houses the selfie camera, earpiece, and flash. Oppo has tested the pop-up camera for 200,000 standard uses, which means it should easily last years without any issues. The front camera pops up in just 0.8 seconds. The phone gets a vertically aligned triple camera setup on the back panel.

The Oppo Reno 5G sports an under-display fingerprint reader for authentication and security. It lacks the 3.5mm audio jack and the IP68 rating for water- and dust-resistance.

In contrast, the Galaxy S10 5G uses a hole-punch display to accommodate the selfie cameras. It measures 162.6 x 77.1 x 7.8 mm and weighs 198g. It has a bezel-less and notch-less display with tiny holes in the top right corner to house the front facing cameras. Its front and back glass panels are covered with Corning’s Gorilla Glass 6 for protection.

The S10 5G retains the 3.5mm headphone jack and offers an IP68 rating for water- and dust-resistance, which means it can survive in up to 1.5 meters deep water for up to 30 minutes. The device gets an under-display ultrasonic fingerprint sensor, which is fast and secure.

Both the Oppo Reno 5G and Galaxy S10 5G feature OLED screens, which deliver vibrant and rich colors. The Reno 5G sports a notch-free 6.6-inch AMOLED panel with a 93.1% screen-to-body ratio. The screen is protected by Corning Gorilla Glass 6. It would offer an immersive experience when playing games or watching videos. It has a resolution of 1080 x 2340 pixels, a pixel density of 387ppi, and 19.5:9 aspect ratio.

The Galaxy S10 5G comes with a slightly bigger 6.7-inch edge-to-edge Curved Dynamic AMOLED display. It has a 1440 x 3040 resolution, a 19:9 aspect ratio, and 502ppi of pixel density. Though the phone offers Quad HD+ resolution, Samsung has set Full HD+ as default resolution. You can change the resolution from Settings. It also supports Always-on Display and HDR10+.

The Oppo Reno 5G has the same hardware specifications as the Reno 10X Zoom edition, except that it also supports 5G networks. The device is powered by Qualcomm’s Snapdragon 855 processor paired with Adreno 640 GPU and X50 modem for 5G connectivity. Depending on the market, it comes with 6GB or 8GB RAM and two different storage options of 128GB and 256GB.

The Reno 5G also supports external storage of up to 256GB via a microSD card slot. It runs Oppo’s custom ColorOS 6 skin on top of Android 9 Pie. Oppo has optimized the device for gaming by adding the Game Boost 2.0 acceleration engine and a copper tube liquid cooling technology for efficient heat dissipation.

The S10 5G packs 8GB RAM and 256GB or 512GB of internal storage. It doesn’t support external memory. The device runs Samsung’s new One UI skin on top of Android 9 Pie. It features a 4,500mAh battery with 25W fast charging and 15W fast wireless charging. It also supports the Wireless PowerShare technology, allowing users to charge their compatible devices and accessories by putting them on the back of Galaxy S10 5G.

The Oppo Reno 5G has the same camera setup as the Oppo Reno 10X Zoom. It has a 16MP selfie camera with f/2.0 aperture placed in the “shark fin” wedge. On the rear panel, it features a 48MP main lens with f/1.7 aperture, a 13MP Periscope zoom lens with f/3.0 aperture, and an 8MP ultra wide-angle lens with f/2.2 aperture. Together, the three lenses offer 10x hybrid zoom, covering a focal length of 16mm to 160mm. It also offers noise reduction, HDR support, and AI-based night portrait mode.

The Galaxy S10 5G has a quad camera setup on the back. DxOMark has hailed it as one of the best smartphone cameras in the world. It consists of a 12MP wide-angle lens with dual apertures, a 12MP telephoto lens, a 16MP ultra wide-angle lens, and a 3D depth sensor that measures the distance between the phone and objects in the scene for bokeh effects. For selfies, it gets a 10MP camera with f/1.9 aperture and a Time of Flight sensor for 3D depth information.

Oppo has a negligible presence in the US, but it has ambitious plans for the European market. Oppo has announced that the Reno 5G would go on sale in Europe at a starting price of EUR 899. It is unclear whether the company will be selling only one storage variant of the phone in European markets or launch it in multiple configurations. Oppo has joined hands with EE in the UK, Swisscom in Switzerland, SingTel in Singapore, and Telstra and Optus in Australia.

In the US, Verizon has started accepting Galaxy S10 5G pre-orders. The 256GB version has been priced at $1,300 while the 512GB storage variant will set you back by $1,400. The 5G phone will become available in Verizon stores on May 16th. Customers pre-ordering the device will get a free set of Galaxy Buds and Samsung Wireless Charging Battery Pack. 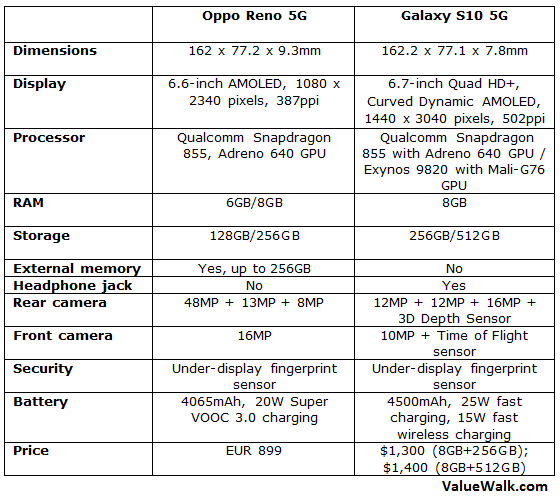