A Market Analysis by iPrice Group

The mobile phone industry is a highly dynamic and competitive industry due to rapid changes in technological developments and market segmentation. Its constant evolution is due to the size of the market, the evolution of product form, consumer behaviour, to the rise and fall of various mobile phone companies or brands.

According to Statista, Nokia was the leader in the market with a high market share (24%) a decade ago. However, according to a report by International Data Corporation (IDC) in Q3 2018, Samsung, Huawei, Apple, Xiaomi, and OPPO collectively held a big chunk of the global market share in the smartphone industry.

The report also mentioned that the percentage of world market domination of the five smartphone manufacturers has reached 69% to date. Therefore, this means that 7 out of 10 consumers owns a mobile phone from either Samsung, Huawei, Apple, Xiaomi or OPPO.

But what exactly were the dynamics of the mobile phone industry in the last 10 years? Which country is home to the world’s leading smartphone manufacturers of today? And when did Chinese smartphone brands begin to create waves in the market?

As such, iPrice Group conducted a study to trace the dynamics of the mobile phone industry utilising data from GSM Arena to derive our market insights. Here are 11 vital insights discovered in our market study. 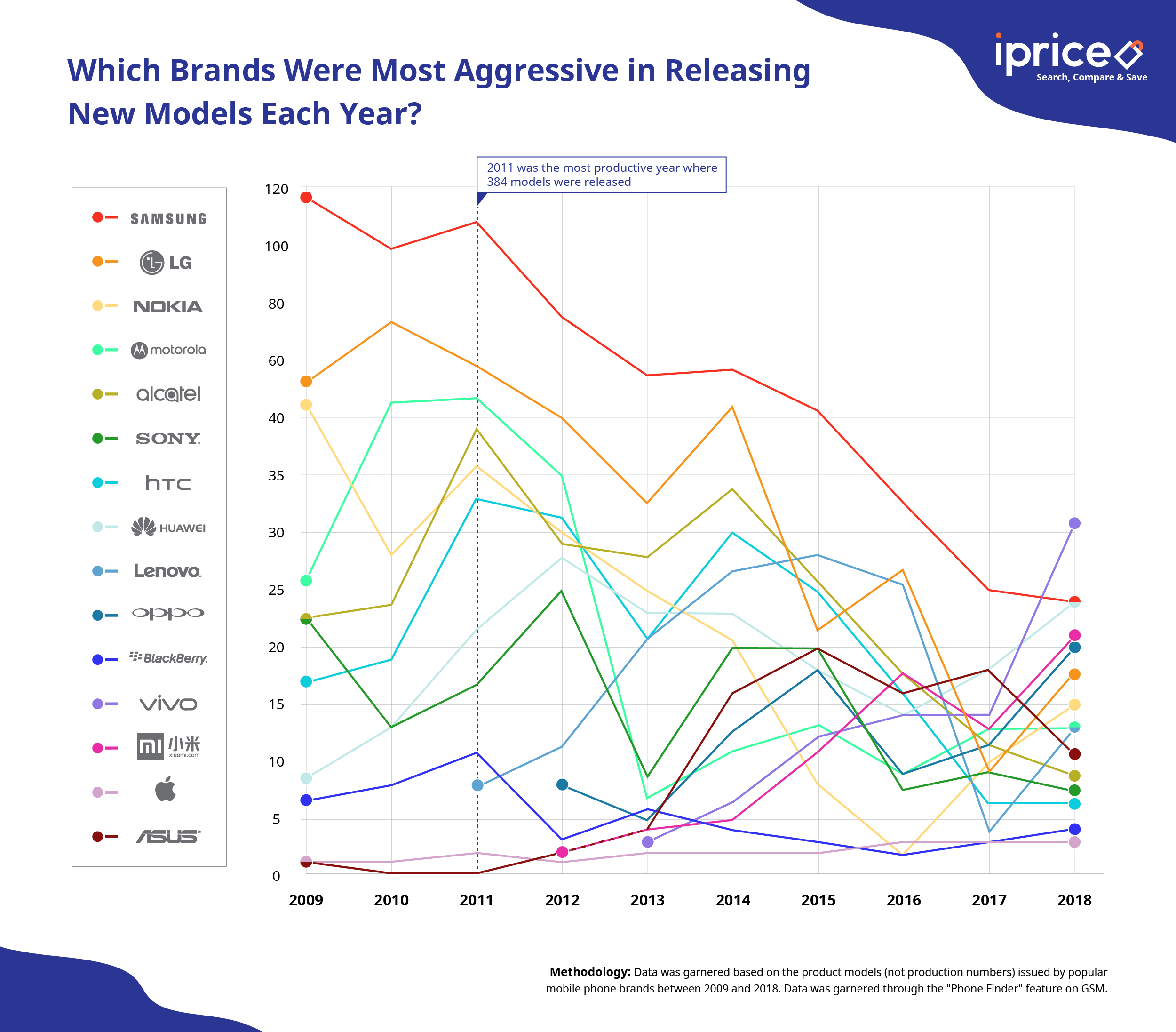 Samsung released 643 mobile phone models in the past decade. This is a significant number when compared to other brands. Huawei, which recently became Samsung's closest competitor, only released 192 models in the same period. Apple, on the other hand, had fewer, releasing 20 models in the last decade.

Vivo became the most active producer of models in 2018, introducing 31 mobile phone models. The Chinese-based company has aggressively expanded its brand across Southeast Asia, West Asia, and Europe in the past five years. A high number of models release were paramount in support of its growth as it provided consumers a wide range of options to suit their budget and requirements. When compared to Samsung, only 24 new models were released in the same period, including the Samsung Galaxy S9 and S9+.

3. Apple Initially Focused on A Single iPhone Model Per Year

In recent years, Apple has been quite aggressive in releasing the number of iPhones models. Recently, we were presented with a trio of iPhone XS, iPhone XS Max, and iPhone XR.

But initially, Apple only relied on a single mobile phone model per year. Then, starting in 2013, the Californian company consistently released more than one model each year. At that time, Apple made the iPhone 5s and iPhone 5c models. The basis of this strategy according to Business Insider’s analysis, is to target a wider range of consumers. A report by Fortune backs up this claim as well and mentions that the addition of the iPhone model was in line with the increase in Apple's market share.

A total of 384 mobile phone models were released to the global market in 2011. This is a staggering number, given that there were only 11 companies that released 384 models in that year and that the widespread use of smartphones was at its initial stage globally.

In a report by The Guardian, 2011 was a period of Android's popularity. A higher number of Android-based mobile phone models were marketed to consumers. In the same year, the International Telecommunication Union (ITU) noted that consumer demand for mobile phones was at an all-time high.

5. Production Trends in the Past Five Years

Android Authority in their report highlighted that the reduction was due to the saturation in the mobile phone industry. In the past, mobile phone companies would usually release a high volume of models in order to increase sales in a wider segment. However, consumers were met with too many options where many devices were almost identical to one another. Today, mobile phone companies have evolved their strategy on production efficiency so that sales targets can be achieved well.

The Wall Street Journal mentioned that Samsung finalised a plan to reduce 25% -30% of the number of mobile phone models starting in 2014 for the sake of business efficiency. Not only Samsung, brands such as LG, Motorola, and Nokia have also reduced their product models in the past 5 years. 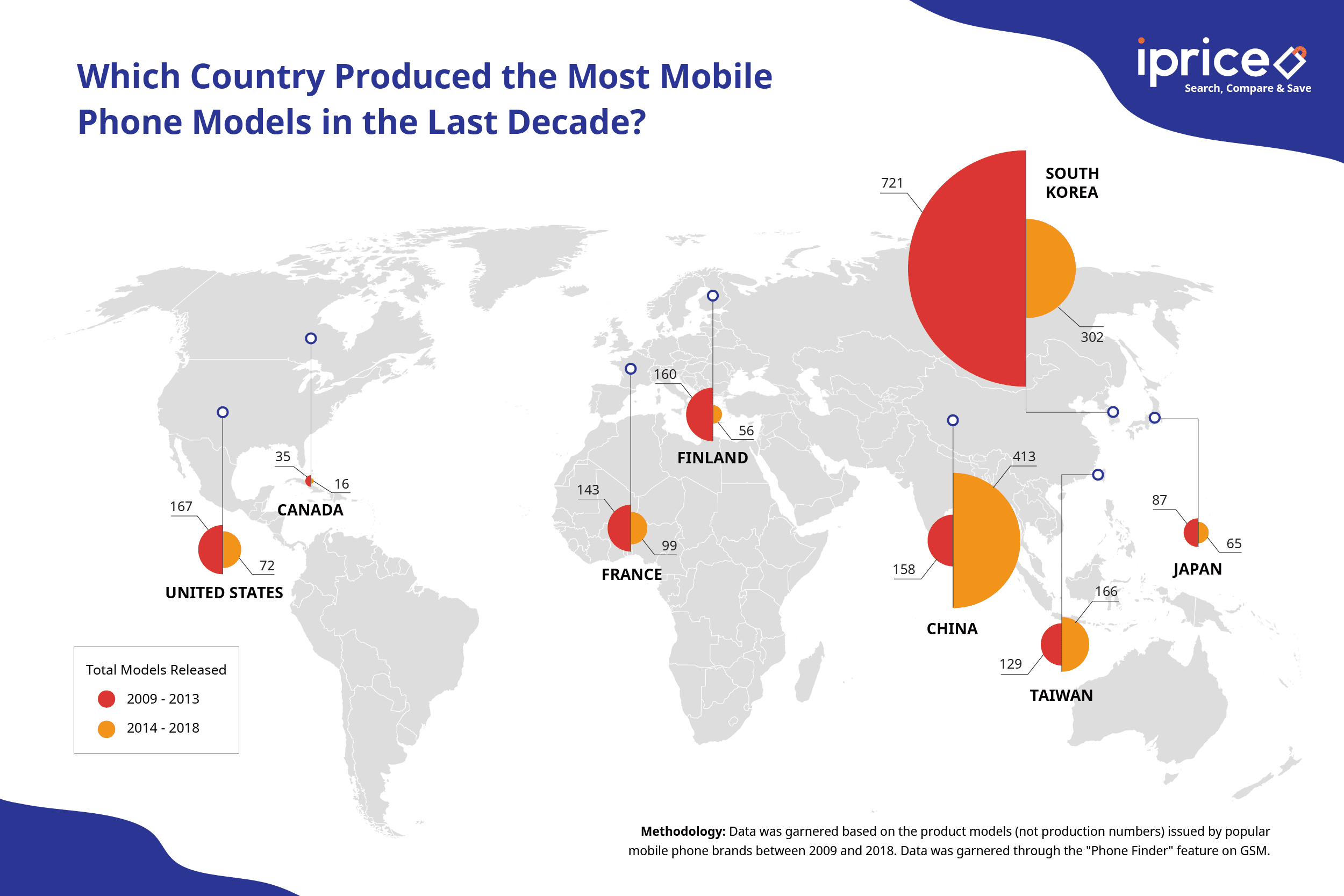 If seen at a glance, the mobile phone industry today are led by brands from China, South Korea, and the United States. In the past 10 years,  8 countries were the main suppliers in the global mobile phone market. Besides the three countries mentioned earlier, other active mobile phone brands were from France, Finland, Taiwan, Japan, and Canada.

But why are there only a handful of countries that can produce mobile phones in large numbers? Cnet discussed in a review that the number of labor factors was quite crucial in the productivity of mobile phone manufacturers. Not all countries have adequate human resources to do manufacturing work such as in the mobile phone industry.

This achievement by South Korea was led by Samsung's productivity which often releases tens or even hundreds of mobile phone models each year in the last 10 years. Similarly, LG would usually release dozens of models, mainly in the 2009-2013 period.

For a long time, South Korea has dedicated a huge amount of resources towards the development of mobile phone technologies. The telephone industry in South Korea began to develop since the 1980s. This was evident as the South Korean government intentionally established a telecommunications technology institution called Electronics and Telecommunications Research Institute (ETRI) in collaboration with Qualcomm for research and development.

Mainland China is now walking in the footsteps of its South Korean and Taiwanese predecessors in the global mobile phone industry. Five of the biggest mobile phone brands are based in mainland China. They are Huawei, Lenovo, OPPO, Vivo, and Xiaomi. When compared to the 15 top producers in the world, these five Chinse brands contributed 20.45%, in other words, released 517 models in the last decade. These five brands further increased the number of models release between 2014-2018 when compared to 2009-2013. 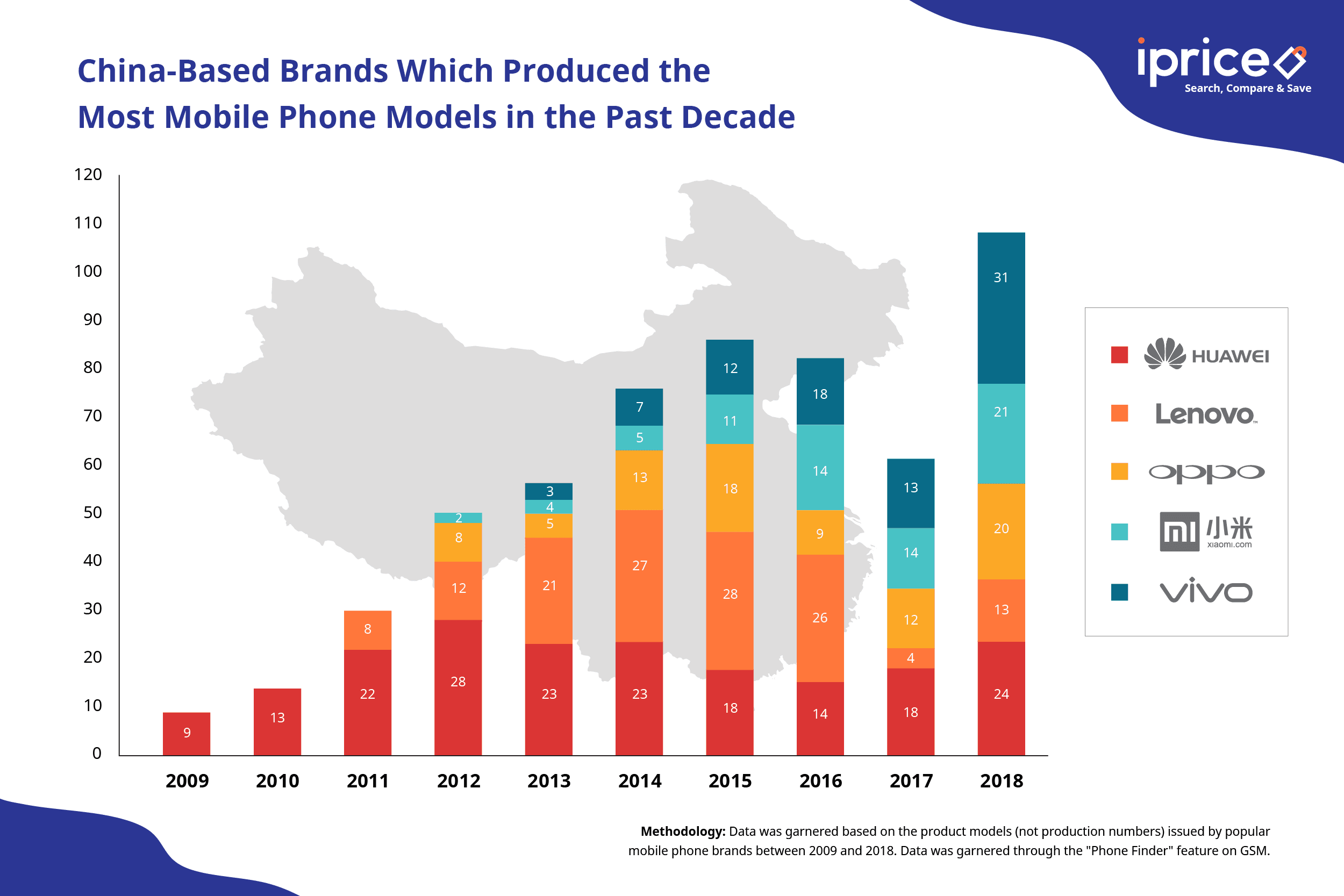 9. 2013 Marks the Rise of China in the Mobile Phone Sector

Chinese manufacturers have been in the global mobile phone industry prior to 2013. Amongst them are Huawei, which has consistently produced Android smartphones since 2009.

But China's market share in the mobile phone industry rapidly grew in 2013, driven by four additional new brands, namely Lenovo, OPPO, Xiaomi, and Vivo. According to Business Insider, there were three key drivers to China’s rise in the industry.

10. Huawei and Lenovo Were the Most Productive Brands

Huawei released 192 mobile phone models in the past decade, while Lenovo released 139 models in the same period. As such, these two brands covered a wider scope of consumers in the global market as compared to Xiaomi, Vivo, or OPPO.

Xiaomi, Vivo, and OPPO marketed their products globally later than Huawei and Lenovo. PC World mentioned that Lenovo has shifted its focus to the global market since 2012, targeting consumers in Europe, the Middle East, and Africa. Similarly, Huawei has focused its marketing efforts outside of its borders prior to the widespread use of smartphones.

11. Vivo Consistently Increased the Number of Models Released Each Year

In recent years, Vivo has initiated extravagant marketing campaigns in a bid to increase its market share. This was evident as they sponsored various major events such as the Indian football league, NBA, FIFA, and collaborated with Marvel Studios.