Logos LP commentary titled, “Stocks Have Become Cheaper Today Than 4 Years Ago,” discussing the demise of the U.S. economy and the performance of the MSCI World Net Total Return Index.

The S&P began April on the right foot on the first day of trading. The sustained strength into the end of the week suggested that it was no April Fools’ joke as investor sentiment was boosted by better-than-expected jobs data and progress on the U.S.-China trade front. As is, the S&P stands at a gain of 15+% for the year, and 1.5% from the all-time highs. Not too shabby given the calls of “this is the end” and “earnings have peaked” which led the market lower in December.

After a brief pause, global markets have resumed their up trends. Even if we look at the MSCI Emerging Markets ETF (EEM) it also remains in a healthy uptrend after the December sell-off with a series of higher highs and higher lows. Interestingly, this pattern is the same just about everywhere one looks around the globe. Worldwide equity markets are rallying, which may be signaling a re-setting of expectations from fear and gloom to cautious optimism.

The U.S. economy added 196,000 jobs in March, according to data released on Friday by the Bureau of Labor Statistics. Economists polled by Dow Jones expected a print of 175,000. The U.S. unemployment rate, meanwhile, remained at 3.8%. However, wage growth expanded 3.2%, below an expected gain of 3.4%.

Overall, however, the March employment report has become the latest in a series of better data this week, including stronger home sales and a pickup in ISM manufacturing activity. Recession fears have been fading as economists have been nudging up their expectations for GDP growth, with some seeing over 2% in the first quarter from earlier forecasts closer to 1% or lower.

The demise of the U.S. economy has been greatly exaggerated. The unemployment rate is low, so that should have a positive impact on consumer confidence, but it’s not so low that wages are growing quickly. From the shareholder’s perspective, margins are expected to remain high. In fact, earnings expectations for Q1 2019 are low and upside surprises are likely to push equities higher. With 23 companies in the S&P 500 having reported actual results for the quarter, 19 have already reported a positive EPS surprise and 13 have reported a positive revenue surprise.

Funnily enough the pundits who were screaming recession in December are still beating their drums albeit less aggressively stating instead that there “is a risk of a recession next year.”

At the end of the day there is always “a risk of recession” in any given year, the question for an investor is whether the current investment environment and where a number of elements stand in their cycles suggest a re-positioning of one’s portfolio? Does the current environment demand a re-calibration along the continuum that runs from aggressive to defensive?

In our view, the current environment does not warrant excessive defensiveness. If we define risk as the likelihood of permanent capital loss (downside risk) as well as the likelihood of missing out on potential gains (opportunity risk) we should also view the future as a range of possibilities rather than as a fixed outcome.

Thus, investors - or anyone wishing to grapple successfully with the future - need to form probability distributions with regards to future outcomes. What are the range of possible future outcomes and what probability can we assign to each?

As Howard Marks has suggested: “it is useful to think of investment success as choosing a lottery winner. Both are determined by one ticket (the outcome) being pulled from a bowlful (the full range of possible outcomes). In each case, one outcome is chosen from among the many possibilities. Superior investors are people who have a better sense for what tickets are in the bowl, and thus for whether it is worth participating in the lottery. In other words, while superior investors - like everyone else - don’t know exactly what the future holds, they do have an above average understanding of future tendencies.”

As such, what sense do we have for what tickets are currently in the bowl? What insights do we have about future tendencies? Can we tilt the odds in our favor?

In last month’s newsletter we put out a call suggesting that we saw an opportunity in this market. We had put this call out to our limited partners in December. What did we see?

In short, we saw that global equity markets actually appeared to be cheaper, or less risky (downside risk) today than they’ve been over the last four years.

Without diving too deeply into the other factors we had been observing about the cycle/investment environment and are still observing today, the nature of the lottery (the tickets and bowl) as we saw it then and as we see it now are summed up nicely by Andrew Macken, Chief Investment Officer at Montaka Global Investments.

This perspective begins with the understanding that over the last 4 years global equities have delivered a real return of approximately zero.

The MSCI World Net Total Return Index has delivered +4.5 percent per annum over the four-year period to 31 December 2018. On its face this return above any global average rate of inflation suggesting real global equity returns have been positive over the period.

The question is what US equities would have delivered absent the Trump tax cut? Montaka’s analysis suggests that approximately 70 percent of US equity returns over the last four years was driven by the Trump tax cut. Absent this tax cut, US equities would likely have delivered an average return of 1.9 percent per annum – exactly the same as the average yield of the five-year US Treasury Bond over the same period.

Now, upon adjusting the MSCI World Net Total Return Index for the Trump tax cut, the four-year annual return of +4.5 percent reduces to just +1.6 percent per annum. Arguably this return is in line with global inflation suggesting real global equity returns over the period have been approximately zero.

What are we to make of this? The implication of the above is: “as earnings grow without commensurate growth in total shareholder return, then equities are essentially becoming cheaper, absent some material change to the trajectory of future growth or cost of capital.”

Over the last four years, global equities have basically drifted sideways (absent the one-time Trump tax cut the effects of which will likely fade very soon); but pre-tax earnings have been increasing!

In the US, for example, S&P 500 pre-tax earnings have increased by 16 percent over the last four years. Said another way: global equity markets have actually become cheaper, or less risky (downside risk), over the last four years. The tickets in the bowl suggest participation in the lottery. Being overly defensive now suggests opportunity risk at a time when downside risk appears less pronounced.

As equity prices fall, the probability that they will be higher in the future rises.

But the conventional wisdom is that equities are heading for a prolonged “bear market” similar to the drawdown at the beginning of the century. Lets remember that recessions are relatively rare, so constantly forecasting them and positioning portfolios to prepare can be a risky proposition (opportunity risk). Furthermore, between 2000 and 2002, the S&P 500 Total Return Index roughly halved and we should note that the forward P/E ratio of the S&P 500 TODAY is the same as where it was at the bottom of the 2002 bear market – and roughly half of where it was at the top, in the year 2000... 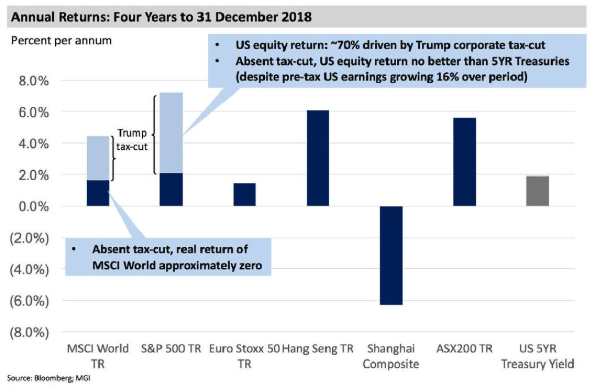 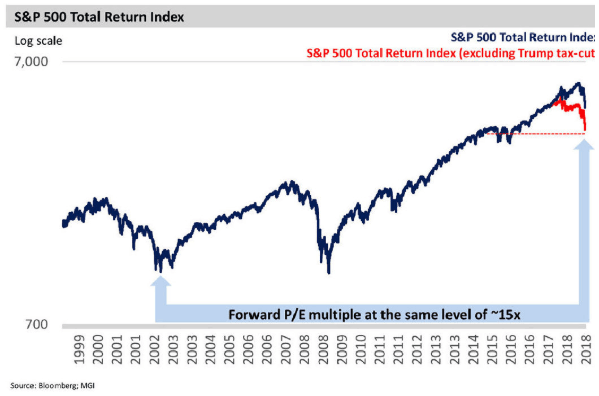 "To be a warrior is to learn to be genuine in every moment of your life."-Chogyam Trungpa

MTY Food Group: There’s Still Value In Food. An article by us looking at MTY one of our best ideas.