Chinese electronics giant Lenovo has launched the much-awaited Lenovo Z6 Pro flagship in its home country. The device goes on sale on April 29th in China. The company claims to have received more than 200,000 reservations for the phone within a day of unveiling. With attractive pricing and premium specs, the Lenovo Z6 Pro will be competing with Huawei’s latest and greatest P30 Pro. Here we compare the Lenovo Z6 Pro with the Huawei P30 Pro in terms of specs, camera, and pricing to see which one could be a better buy.

The two handsets have a striking similarity in terms of looks. The Z6 Pro and P30 Pro both have a nearly bezel-less design with a tiny waterdrop notch at the top to accommodate the selfie camera and a chin at the bottom. They both have a vertically aligned quad camera setup on the rear panel. The back panel of both devices has a gradient finish with shifting hues, which gives them a premium feel. The rear panel of these devices is curved on the sides, making them comfortable to hold in hand.

Both handsets use an under-display fingerprint sensor for authentication and security. While the Z6 Pro retains the traditional 3.5mm headphone jack, Huawei has done away with it.

Both handsets use OLED screen technology, which offers more vibrant colors and truer blacks than LCD panels. The Lenovo Z6 Pro gets a 6.39-inch Super AMOLED display with a waterdrop notch. It offers 1080 x 2340 pixels resolution, 19.5:9 aspect ratio, 403ppi of pixel density, and an impressive 85.3% screen-to-body ratio. Both the Z6 Pro and P30 Pro support HDR10. Lenovo has also used a blue light filter on the screen.

The P30 Pro sports a slightly larger 6.47-inch OLED screen with Full HD+ resolution of 1080 x 2340 pixels. It has a 398ppi of pixel density, 19.5:9 aspect ratio, and an 88.6% screen-to-body ratio. Both phones offer an immersive experience when watching videos or playing games.

On the inside, the Lenovo Z6 Pro packs Qualcomm’s Snapdragon 855 chipset with eight cores. The processor is accompanied by Adreno 640 GPU. It runs Lenovo’s custom ZUI 11 skin on top of Android 9 Pie, which means it is loaded with bloatware.

Lenovo has included a liquid cooling system for heat management, which would come handy when you are running multiple apps or playing demanding games. It comes with stereo speakers with Dolby Atmos surround sound support. The phone supports dual-SIM functionality. It packs a giant 4,000mAh battery with 27W fast charging support. It also supports reverse charging.

The P30 Pro runs Huawei’s in-house HiSilicon Kirin 980 processor paired with Mali-G76 graphics processor. The Kirin 980 chipset is a beast when it comes to performance. It also gets two dedicated Neural Processing Engines (NPUs) to speed up the AI-related tasks.

The Huawei flagship packs 8GB RAM and three different storage options of 128GB, 256GB, and 512GB. It supports external storage of up to 256GB via a nano-memory card slot. The P30 Pro features a 4,200mAh battery with blazing fast 40W charging and 15W wireless charging. It delivers up to 70% charge in just 30 minutes.

It also supports reverse wireless charging, allowing you to charge other devices and compatible accessories by putting them on the back of P30 Pro. The P30 Pro runs Huawei’s custom EMUI 9.1 skin on top of Android 9 Pie, which means it is loaded with some bloatware. For audio, it offers active noise cancellation and Dolby Atmos surround sound technology.

Lenovo’s shiny new Z6 Pro sports four cameras on the back – all aligned vertically. It hasn’t been tested in the real world yet. Its rear camera setup consists of a primary 48MP lens with f/1.8 aperture, a 16MP ultra-wide angle lens with f/2.2 aperture, an 8MP telephoto lens with f/2.4 aperture, and a 2MP depth sensor dedicated to video enhancements. It gets laser autofocus and dual tone flash. On the front, it has a 32MP lens with f/2.0 aperture for selfies.

The Huawei P30 Pro wears the crown of the world’s best smartphone camera, according to DxOMark. Its rear camera setup consists of a 40MP primary lens with f/1.6 aperture and OIS support, a 20MP wide-angle lens with f/2.2 aperture, an 8MP Periscope zoom lens that offers 10x hybrid zoom and 5x digital zoom, and a 3D Time-of-Flight sensor that creates a 3D image of the scene based on the time taken by light to bounce off various objects in the scene. 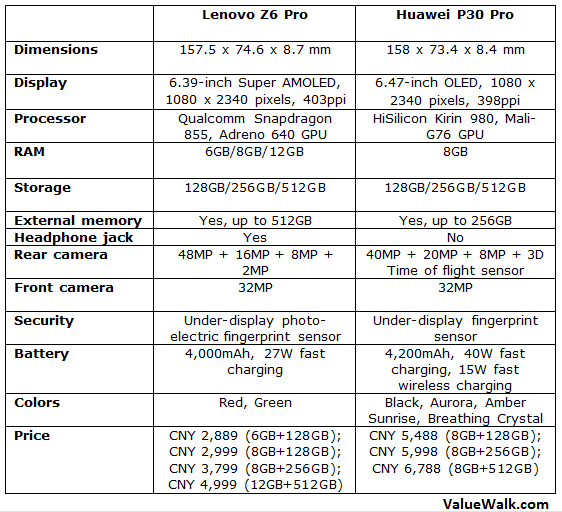