The Galaxy S10 5G has the same design language as the standard Galaxy S10 models. It features a nearly bezel-less design with a hole-punch display to accommodate the selfie cameras. Its rear panel is made out of glass to facilitate wireless charging. The device measures 162.6 x 77.1 x 7.9 mm and weighs 198g. The front and rear glass panels are protected by Corning’s Gorilla Glass 6. The phone has an aluminum frame in the middle.

The S10 5G comes with an IP68 rating for water- and dust-resistance, meaning it can survive in up to 1.5 meters deep water for up to 30 minutes. Thankfully for many Samsung fans, it retains the 3.5mm headphone jack. Samsung has integrated the fingerprint sensor under the display. The ultrasonic fingerprint sensor is fast, secure, and reliable.

The LG V50 ThinQ 5G measures 159.2 x 76.1 x 8.3 mm and weighs 183g. Its rear panel is protected by Corning’s Gorilla Glass 5. It not only comes with an IP68 rating for water- and dust-resistance, but also has MIL-STD-810G military-grade certification. The V50 ThinQ 5G also retains the 3.5mm headphone jack. Unlike Galaxy S10 5G, it comes with a rear-mounted capacitive fingerprint sensor, which is not as convenient as the in-display fingerprint reader.

The V50 ThinQ comes in only Astro Black color while the S10 5G will be available in Majestic Black, Royal Gold and Crown Silver colors.

Th S10 5G sports a gorgeous 6.7-inch edge-to-edge Quad HD+ Curved Dynamic AMOLED display. It’s even larger than the Galaxy S10 Plus. The giant screen offers an immersive experience whether you are watching videos or playing games. Samsung has set Full HD+ as default resolution, but you can change the resolution from Settings.

The V50 ThinQ sports a 6.4-inch FullVision P-OLED display with a 19.5:9 aspect ratio. It has a pixel density of 537ppi and resolution of 1440 x 3120 pixels. LG has also launched a secondary attachable display to go with the V50 ThinQ. The second screen is 6.2-inch OLED panel that you can attach to the body of V50 via a pogo pin. Both the phones support HDR10 and Always-on display technology.

Both the phones are beasts in their own right. The S10 5G features an octa-core Exynos 9820 chipset with Samsung’s in-house Exynos Modem 5100 for 5G support. The US variant of the device would run Qualcomm’s octa-core Snapdragon 855 with Snapdragon X50 5G modem. Samsung promises up to 1.2GB/s of upload and 1.2GB/s of download speeds.

The S10 5G packs a huge 8GB RAM and two different storage options of 256GB or 512GB. The device runs Samsung’s custom One UI skin on top of Android 9 Pie software. It packs a monstrous 4500mAh battery with 25W fast charging and 15W fast wireless charging. It also comes with the Wireless PowerShare technology, allowing you to charge your accessories and other devices by putting them on the back of S10 5G.

The V50 ThinQ 5G runs Qualcomm’s latest Snapdragon 855 processor with Snapdragon X50 5G modem. It packs 6GB RAM and 128GB of internal storage. It offers only one storage variant, but supports external storage of up to 2TB via a microSD card slot. It gets Hi-Fi Quad DAC, Boombox Speakers, support for AptX and DTS:X 3D surround sound technology, and far-field microphones.

South Korean carriers rolled out 5G network in December last year, but they delayed the official launch because no 5G phones were available in the market. It means both the Galaxy S10 5G and LG V50 ThinQ 5G customers will be able to take advantage of the ultra-fast download speeds.

This is one of the most important things customers look at when buying a new phone. The standard Galaxy S10 Plus has one of the world’s best smartphone cameras, and the 5G phone only gets better. It features a total of four cameras on the back with dual OIS support.

One is a 12MP wide-angle lens with dual aperture, another is a 12MP telephoto lens, and the third lens is an ultra-wide angle 16MP lens. The fourth lens is a 3D depth sensor that measures the distance between the phone and objects in the scene for bokeh effects. On the front, the S10 5G features a 10MP lens with an f/1.9 aperture and a Time of Flight sensor for 3D depth information.

It’s worth pointing out that the camera is not the biggest strength of LG Electronics. You cannot expect the V50 ThinQ 5G to offer the same level of photography experience as the S10 5G.

Samsung has officially announced that the Galaxy S10 5G will go on sale in South Korea starting April 5th. The 256GB variant costs 1.39 million Korean won ($1,230) while the 512GB model is going to cost 1.55 million Korean won ($1,367). Samsung is expected to launch the 5G phone in the US sometime in June. It has partnered with Verizon and other carriers to sell the Galaxy S10 5G. Korean carriers are offering freebies such as wireless vacuum cleaners and VR headsets to get customers to upgrade to 5G.

The LG V50 ThinQ is a little cheaper than the S10. It has been priced at 1.19 million Korean won ($1,050). LG said it had kept the price lower to reduce the entry barrier to 5G for consumers. The V50 will go on sale on April 19, 2019 in South Korea. People who purchase the V50 ThinQ by the end of May will get an LG DualScreen for free. If you buy the DualScreen separately, it costs 219,000 Korean won. 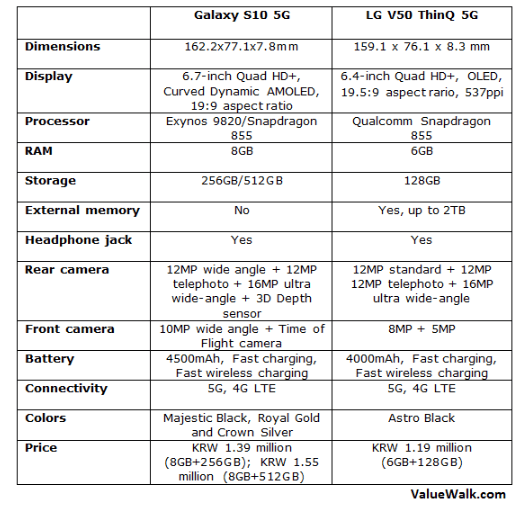