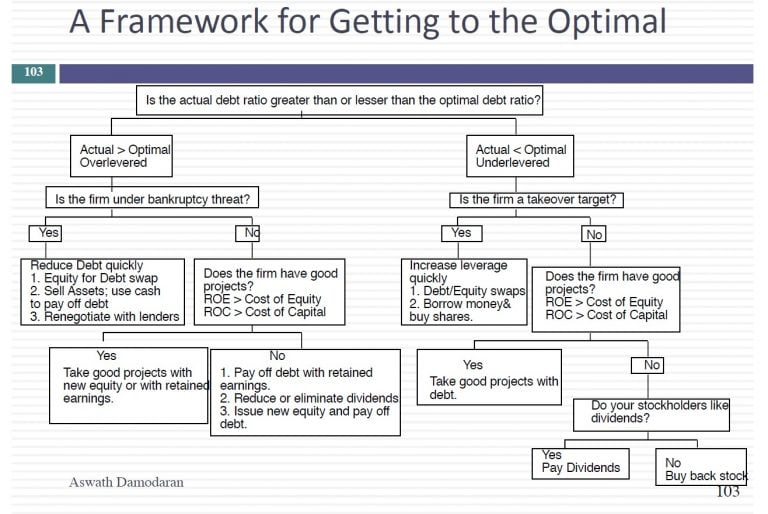 In today’s session, we looked at applying closure to the optimal debt ratio analysis by looking at how quickly you should move to the optimal and what actions to take (recap versus taking projects), drawing largely on numbers that we have estimated already for the company (Jensen’s alpha, ROC – Cost of capital). We then followed up by examining the process of finding the right debt for your firm, with a single overriding principle: that the cash flows on your debt should be matched up, as best as you can, to the cash flows on your assets. The perfect security will combine the tax benefits of debt with the flexibility of equity.

So the end is near. Only three weeks left of class and then it's finals week. So. Which is good news and bad news. Good news is the end is near. The bad news is the end is near. So. Either way you've got to get your projects going if you haven't been working on them. But you had a chance this weekend ready all day the optimal debt ratio for your companies. OK. So that's what I want to start with today. If you've done the optimal debt ratios in the next 20 minutes you can actually do your project while we're doing what we're doing. So. We talked about coming up with an optimal that rates are using a cost of capital approach and enhance cost of capital approach and APV approach. Looking at what everybody else in the sector is doing where in the lifecycle. Whatever use or all of them make a convergent decision. This is what my optimal is and now you have a choice to commit. Your actual debt ratios are there you come up with an optimal one to three things I said is going to be true I the company is right up close to its optimal in which case what should you do. Follow the Hippocratic Oath Do no harm. Don't feel the urge to tell a company to do something when it doesn't have to do something. But let's take the two other scenarios. Your company could have too little debt or too much debt. If you're going to have a problem which one should you have.

It's a much more pleasant prompt of too little debt than too much debt. So let's take that problem first. So if your company is under Levit there's too little of that. The first question you need to ask yourself is does being under Levit make me the potential target of a takeover. To me I start with that question. Why would having two little debt make you potentially the target of a takeover. Sam you me you made your there quite as you are easier to do your acquisition what does he have to do. He basically can borrow money using your assets to essentially take you over. So if you're under 11 you've made acquisitions. In fact I'll give you the analogy that would bring this home because I think it's in a sense tricky to think about and why a company being under 11 would make a target of a takeover. Let's make it much more personal. Let's suppose you buy a house anywhere in the Tri-State area. It's probably going to cost you a million dollars plus and unless you're a drug dealer you're not paying for it with the cash you're probably going to borrow much of the money. So let's say you borrow 75 percent to buy the house and then you're really frugal for the next five years. You pay down your principal. To the end of the fifth year. You own the only all equity financed house in your entire neighborhood.

You decide to have a mortgage burning party humidity's the old days when people used to live in the same house for 30 years the day they made their last mortgage payment they would have a big party did have coffeecake and orange juice and coffee and maybe even alcohol. Invite all the neighbors over and they physically burned the mortgage papers. Once in a while they burn the house down with them. But you know that was kind of a bad side effect. So you decide to have a safe mortgage burning party which means that you can invite the local firemen over as well. So they all show up at your house and your neighbor Bob who's never liked you also shows up whites free food. He's never liked he's lived next to you for 15 years. He doesn't like the shrubs you pick he doesn't like the way you cut your lawn. He's never liked your kids. But he shows up anywhere and while eating your coffeecake and drinking your orange juice he's plotting his revenge. After the party he goes to a local neighborhood back says there's this house in my neighborhood million dollars. It's worth a million dollars into all equity funded. Will you lend me eight hundred thousand dollars against that house. This is where the analogy kind of breaks down. Right. You go to a bank and try to borrow on your neighbor's house. What's the response you probably are going to get. It's not your house you can buy. But let's say this is your friendly neighborhood banker. He advances eight hundred thousand dollars to Bob who now proceeds to do a hostile acquisition of your house. Again I'm not quite sure how this works he approaches your kids and says hey you know what you want to your own floor to sell your share of the house.

He gets 51 percent the house and throws you out of the house. Thank God this happened with the Hots. But let's make this a billion dollar company that could have 600 million dollars in debt. But you are the CEO and you hate borrowing money. So you've run this company as an all equity funded publicly traded company. I see a company I see you can borrow six hundred thousand I go to the friendly neighborhood bank and I tried to borrow six hundred thousand dollars on your company. Odds are I'm going to run into the same issue again with.