Our thought leadership division, the Brandes Institute, routinely writes about biases that can derail even the best investment strategy. Cognitive biases such as anchoring, confirmation and survivorship are natural, built-in biases that can cause real damage if not identified and guarded against.

We recommend establishing rules and guidelines to help investors manage innate biases. One effective resource we developed with behavioral finance expert Dr. Frank Murtha* is the “Investor Stress Management Plan.” This tool is designed for use by individual investors and plan participants. The idea is for them to describe in their own words the actions they will take, for example, during a market correction. By identifying logical responses before a stressful event happens, investors may feel a greater sense of control when one actually occurs—because they “knew” it would happen and how to respond.

On the theme of behavioral biases, two items caught our attention over the past few months. The first, which on the surface is unrelated to investing, provides a history lesson on how the U.S. armed forces sought to protect combat planes during WWII.1 The second item, which is more directly related to investing, pertains to the largest cohort of professionals in our industry: 25 to 34 year olds. This group has never experienced a period in which value stocks outperformed their growth counterparts.

Why do we think these seemingly unrelated items offer important insights for today’s investment professionals in spotting and dealing with behavioral biases? 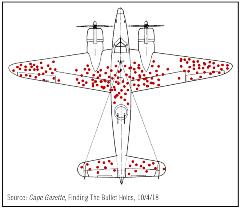 In an effort to help reduce damage from enemy fire, the U.S. military decided to armor its bombers and set out to determine the most efficient way to do it. They rigorously analyzed what they thought was all available data and produced a diagram indicating where the planes were sustaining the greatest damage. The theory was straightforward: Reinforce the areas with the most red dots (see corresponding image). However, the engineers succumbed to what has come to be known as survivorship bias.2 This is the tendency to focus on the available data and ignore failures which may have reduced the size of the sample. The engineers failed to recognize the obvious—the areas on the planes that sustained no damage were actually the most vulnerable. Why is that?

Most of the planes that suffered hits to areas not marked by red dots—the nose, engines and mid-body—never made it home and were thus omitted from the sample. Therefore, the original conclusion on where to strengthen the planes, based on those that returned home, failed to consider all evidence. With greater insight, the engineers would have realized that they did not include all relevant data before they drew their conclusions.

In the second item, a research report from Bank of America, we learn that, “The largest age cohort of financial services employees is now 25 to 34 year olds (Source: BLS). The most memorable early event of their careers was likely the Financial Crisis. Growth and momentum stocks have outperformed for their entire careers, whereas value investing has been a losing proposition. The average level of the VIX (the CBOE Volatility Index) since they began working is 17, ~25% lower than the prior two decades’ average of 22.”3

One need only look at the longer term (see table) for evidence that young investment professionals may be suffering from attention response (also knowns as recency bias), which is the tendency to incorrectly estimate the frequency or severity of an event based on recent exposure to it.4 As value investors, we believe it’s plainly evident that company valuations (the basis for value investing) have always mattered, surely matter today, and will matter in the future. The Bank of America report puts it succinctly (with emphasis added): “The prototypical professional investor is likely focused on growth and momentum, thinks Financials are un-investible, is unused to volatility, and sees valuation as largely irrelevant.”5 We worry that such biases will lead to disappointing long-term outcomes.

So, how to deal with these behavioral biases? We recommend looking beyond the immediately available data, broadening your time horizon beyond recent periods and challenging your prior conclusions—especially those that feel the most comfortable. Given the natural tendency to generalize based on recent events (e.g., the period subsequent to the Global Financial Crisis), we encourage investors to consider a larger sample set (i.e., by including pre-crisis data) and focus on the bigger picture to avoid repeating possible pitfalls these biases can create.

For more information on how to address biases in decision-making, or for additional details about how Brandes seeks to exploit these biases in the marketplace, please contact us.

*Frank Murtha, Ph.D., co-founder of MarketPsych, specializes in helping others apply behavioral finance theories to enhance decision-making with the goal of improving returns. He has consulted to dozens of leading financial institutions and trained thousands of professionals. Dr. Murtha is not affiliated with Brandes Investment Partners.

1 “Abraham Wald and the Missing Bullet Holes,” Jordan Ellenberg. An excerpt from How Not To Be Wrong, Penguin Press, as published by Medium, July 14, 2016. “One Man Explains Why WWII Aircraft Were Protected The Wrong Way, And It’s An Important Example Of ‘Survival Bias’,” By Rugile, BoredPanda Staff, Undated, boredpanda.com.