The Absolute Return Partners letter for the month of April 2019, titled, “Is Life Expectancy Falling? Really?”

Life expectancy would grow by leaps and bounds if green vegetables smelled as good as bacon. – Doug Larson

Is it for real?

When, in meetings, I make the point that life expectancy has started to decline in some of the most prosperous countries, I often run into a wall of disbelief. Many simply don’t believe me, so I decided to do some further digging.

In my search for answers, I made some quite interesting observations (if anything to do with death can ever be described as interesting), and I will share those observations with you today. While it is indeed correct that life expectancy at birth has dropped modestly in some developed countries in recent years, there are a few caveats. I strongly suspect those caveats have coloured perceptions.

Some statistics to prove my case

Before I go any further, let me throw some numbers at you to prove my case. As per the most recent statistics, overall US life expectancy at birth averaged 78.6 years in 2017 – down from 78.7 years in 2016 (Exhibit 1). Whereas women held steady at 81.1 years, life expectancy for men dropped from 76.3 to 76.1 years. Life expectancy in the US has now dropped every year since 2015.

According to the report from the US Centers for Disease Control, Americans at the lower end of the life expectancy range have four things in common (Source: AJC.com): 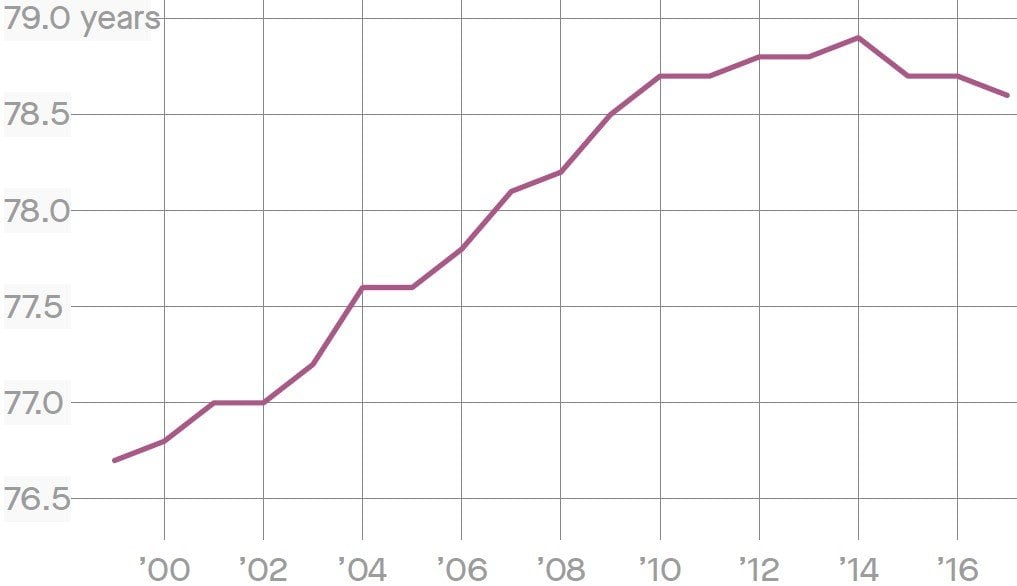 Now to the UK where a very similar picture is unfolding. As per a recent life expectancy report from the Office for National Statistics, life expectancy at birth for the country as a whole didn’t change much from 2015 to 2017 (Exhibit 2), but fell meaningfully in the poorer parts of the country (Wales, Scotland and Northern England).

Allow me to make two comments. Firstly, for the sake of full transparency, I should point out that most other OECD countries have experienced a modest – albeit a very modest – increase in life expectancy more recently.

Secondly, as I have pointed out more than once in recent Absolute Return Letters, the three countries which have experienced the biggest decline in living standards (i.e. the biggest drop in real wages) over the last 20 years or so are Italy, the UK and the US. The fact that those three countries have also experienced a decline in life expectancy sounds to me as too much of a coincidence, so I decided to dig a little bit more into this.

For starters, we don’t necessarily get all the finer details correct when looking at these sorts of things because most of us suffer from cognitive biases. Take me as an example. I socialise mostly with other well-educated people, predominantly from the financial services industry. That colours my perception, and while it is indeed correct that the average person doesn’t live as long as he did only a few years ago, it is not correct as far as the well-off are concerned.

Why such a massive difference between two seemingly very prosperous countries? The simple truth is that wealthy people can afford treatment forms that are not on offer to the man in the street. There are not many poor people in Monaco, whereas the average in the US is skewed by the extraordinary wealth held by a limited number of people, meaning that the median becomes a more relevant number than the average, and median wealth is much lower in the US than it is in Monaco.

Why have people started to die younger in the UK, Italy and the US? The Americans provide the most information, so let’s focus on the 2018 study from the US Centers for Disease Control. Heart disease and cancer still kill most Americans, but that is not the reason life expectancy has fallen more recently.

To the contrary. During the last 100 years, substantial advances in treatment forms have actually led to a meaningful increase in life expectancy if you suffer from a heart disease of some sort or cancer, and that continues to be the case.

Having said that, a sharp rise in fatalities caused by lifestyle issues such as alcohol and drug abuse explain much of the decline in US life expectancy. Take for example the US death rate from drug overdoses. It rose by no less than 255% between 1999 and 2017 (Exhibit 3). 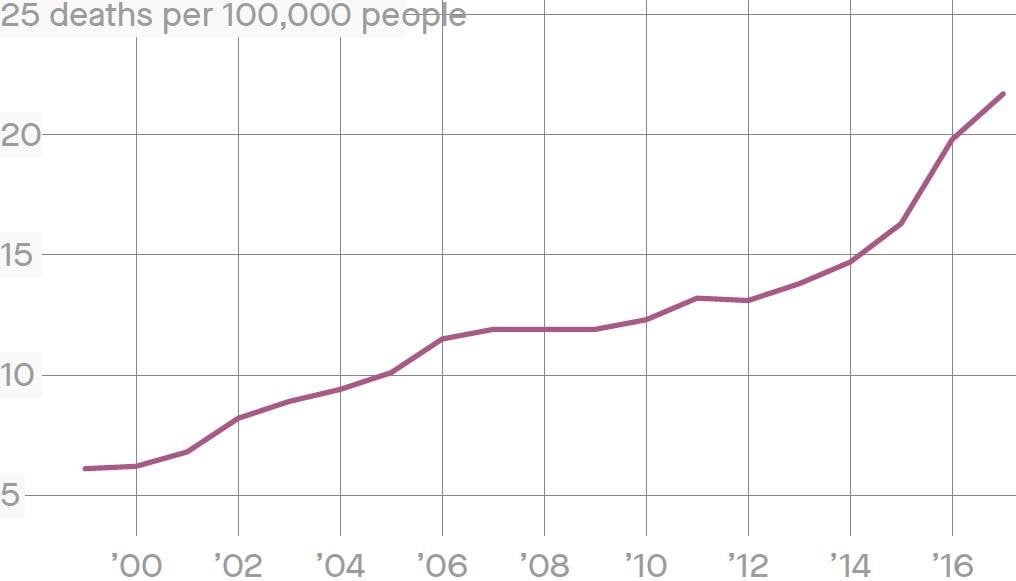 Likewise, as far as suicides are concerned, between 1999 and 2017, the US suicide rate has been constantly on the rise and is up about 33% over the entire period (Exhibit 4). I note that the US suicide rate is particularly high in rural parts of the country – more on that below. 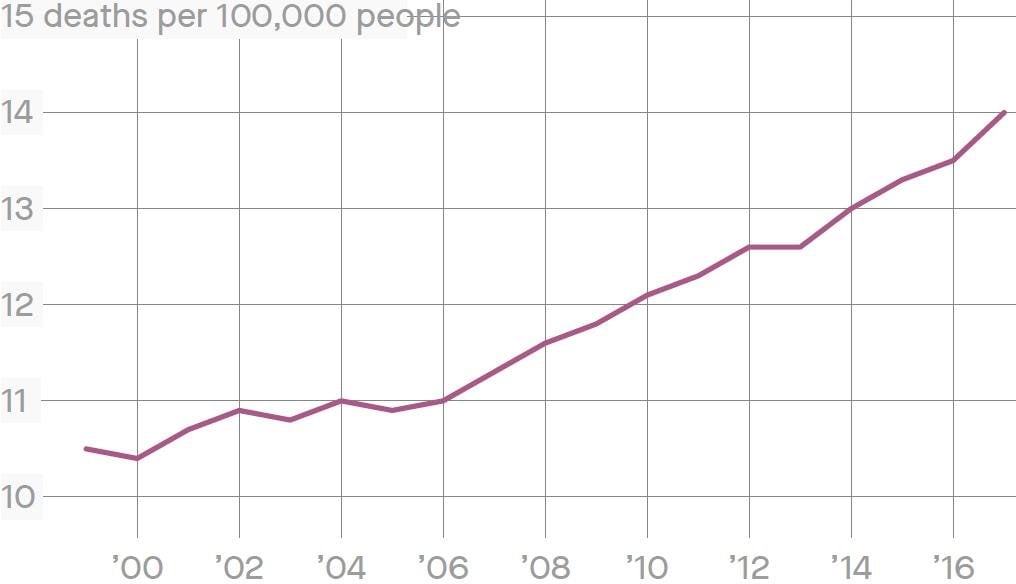 Some commentators have blamed the easy access to guns in the US for the increase in suicides, particularly because the suicide rate is highest in rural parts of the country where access to guns is plentiful, but I don’t buy that argument. Neither Italy nor the UK have easy access to guns, and both of those countries suffer from a suicide rate quite similar to that of the US - see for example this report from the Office for National Statistics, or see this article from the Huffington Post, where there is even a mention of a suicide epidemic in Italy.

Rather, I believe it has to do with economic conditions in those three countries. People are simply more suicidal during difficult times, and falling real wages in the UK, Italy and the US have driven many people in those countries to despair. Furthermore, as far as living standards are concerned, rural communities have been particularly badly affected, so no wonder the suicide rate is higher there.

If the man in the street is under pressure to make both ends meet financially, then substance abuse may be the way out for some, whereas suicide becomes the way out for others. I suspect there is a very powerful link between falling living standards and the recent drop in life expectancy.

The link between austerity and life expectancy

Adding to that, if difficult economic conditions are not only about declining real wages, but governments are also forced to tighten the belt, then life expectancy is affected even more.

Researchers have found a statistically significant link between mortality and austerity. Greece provides plenty of evidence of that. As the crisis unfolded in Greece in 2008 and the years thereafter, far more Greeks died than suggested by the mortality tables. In 2012 alone, more people died in Greece than in any other year since 1949 (Exhibit 5).

The combination of ageing of the populace at large and new and better, but also more expensive, treatment forms is a massive dilemma for national health services when austerity is on the agenda. As society continues to age, this dilemma can only become an even bigger issue; hence life expectancy will most likely continue to improve for the well-off but not for the man in the street. 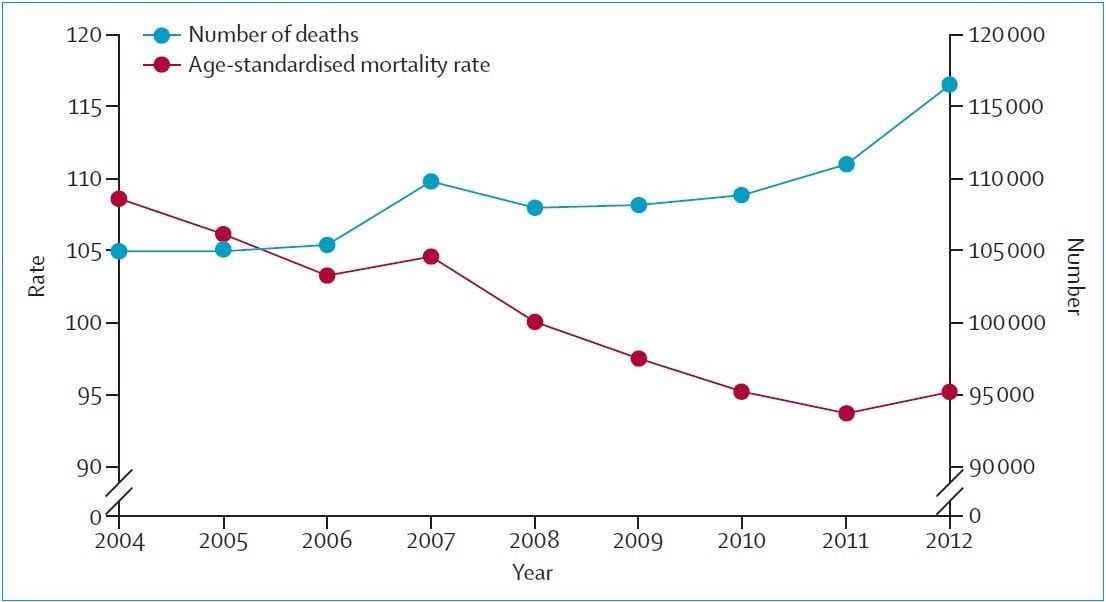 In December 2017 I wrote an Absolute Return Letter called Live and Let Die. In it, I argued very much along the same lines as I am arguing today. If you find the topic of interest, I would recommend you read it (again) which you can do by clicking here.

Now, how does all this add up? On one hand, it is not entirely impossible that life expectancy begins to rise again once we finally put the Global Financial Crisis behind us, and things return to some sort of normal (whatever that means).

On the other hand, I am fearful that things won’t return to ‘normal’ for many years to come. The OECD workforce will decline in size for most of the rest of this century so, to begin with, GDP growth will be negatively affected by a shrinking workforce for decades to come. That will affect tax revenues, hence also the amount of money governments can afford to spend on the elderly.

As those retirees age, they become more expensive to look after. The NHS (the National Health Service in the UK) estimates that a man around 80 years of age is about seven times more expensive to them than a man in his 30s. As baby boomers retire in bigger and bigger numbers, and as those retirees age, governments could be forced to make further, and much more dramatic, cuts.

Having said that, there is a possible silver lining in this otherwise quite depressing story, and that is the potential for medical breakthroughs. One example of that would be cancer vaccines which could dramatically cut the death rate from various cancers.

There are already a few vaccines that help to prevent viruses that can cause certain types of cancer, and I would expect more vaccines to be approved in the years to come. A breakthrough in this area could have a massively positive impact on life expectancy.

On the other hand, should life expectancy continue to decline, believe it or not, there is also a silver lining on the horizon, and that has to do with the prevailing pension model in certain countries, which is known as the Defined Benefit (DB) model.

DB pension schemes will benefit dramatically from a further shortening of life expectancies. The UK pension industry is underfunded (or entirely unfunded) to the tune of £10-11 trillion – equal to 5.5 times UK GDP. If scheme members continue to die earlier than expected, the underfunding could fall dramatically, making it more likely that the DB pension model stands a decent chance of not suffering the total collapse that I would otherwise expect.