ValueWalk
Home Videos Which Sector Is The Pin That Pricks The Everything Bubble? 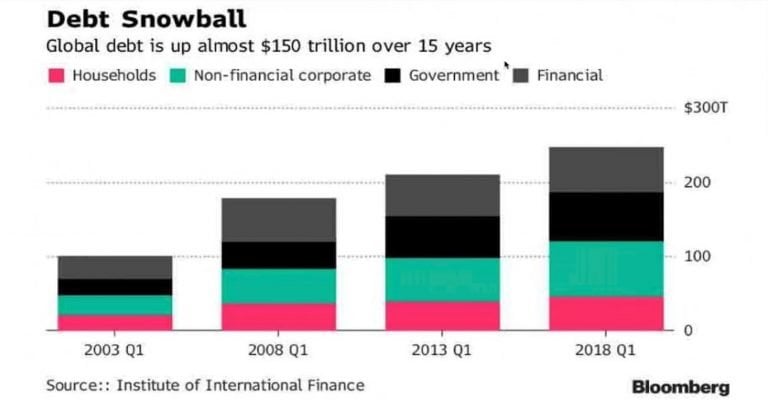 With seemingly everything except precious metals in a bubble, it can be quite hard to keep your eye on the ball. Join Mike Maloney as he uncovers what could potentially be a huge factor in the next crash – insane levels of corporate debt.

Mike Maloney On The Corporate Debt: Which Sector Is The Pin That Pricks The Everything Bubble?

Now does that mean that the stock market and that real estate are the biggest threats here. Not necessarily to do that you've got to look at the increase of debt in the different sectors of the economy. What we have here are households corporations government and the banking sector. Now the last crisis was mostly the banking sector and some of it was households being foreclosed on. So you take a look at what the growth was. This is a five year period from 2003 to 2008. The growth of household debt was almost double the growth of corporate debt was less than double the growth of government debt was less than double the growth of the financial sector sector was more than double. So this was the thing that got blown into the greatest bubble and this was this thing that was blown into the second greatest bubble and what suffered most during the crisis of 2008 was first the banking sector the financial sector. That's where the big bailouts came and a lot of household net worth was destroyed through foreclosures and so on. Now since the crisis of 2008 what has grown the most. Well it's not household debt that's grown very little. The corporate debt has grown significantly. Government debt has doubled or possibly more. The financial sector is actually a little bit smaller. So this is suggesting now I'm not saying that this is actually what's going to happen but what it's suggesting is that the next big crisis comes in government bonds. So government debt and corporate sector. I've got more evidence especially on the corporate sector.

I'm not going to cover government debt in this video but the corporate sector is is in for some big problems in this next big crash. So this is all the debt that's securitized plus all of the loans in the United States. This does include government debt. So it includes the Treasury bonds and so on which is about 20 trillion of it but the rest of the debt is approaching 70 trillion dollars. This is an insane level of private debt that is going on there in a 20 trillion dollar economy we have 50 trillion trillion of total private debt. That means if you subtract the national debt out of this. And so this is dangerous and I encourage you to watch one of the videos by Steven Keen that shows what happens when you build up too much private debt in an economy. Now this is the non-financial corporate businesses so basically this is corporate debt not part of the banking sector debt their liability level. And the Fed funds rate. So interest rates and what you see here is that corporations have been on a debt binge lately. They're like drunken sailors. And so this debt binge getting high on debt. What did they use all of that for. They didn't use it for capital investment. They didn't invest in a lot more equipment to grow their businesses. They didn't invest in a whole lot more employees what they invested in was stock buybacks which drives the price of their stock up. And then the company owns more of the stock. So the company is worth more temporarily. The company also has a lot more debt.

It's added all of this debt to it. Now that's because this was free currency the Federal Reserve was basically giving it away for free. So when the Fed takes interest rates down corporations can also create bonds and sell them at a much lower interest rate. So the cost of servicing their debt is very low. But all of those bonds have to get rolled over they mature some day there's payments to be made on them and then the principal comes due and they have to pay off these bonds so what they have to do is either pay it off out of the cash that they've got or roll it over by issuing another bond except interest rates are going up which means the rate of corporate bonds has to go up which means the rate of interest that they're paying back to the party that loaned them the currency whether it's a bank or whether it's the public retail investors buying that bond they have to pay back at a much higher interest rate. So the cost of this debt increases in the future the cost of this debt that they've already taken on is going to increase in the future. And there's a big recession coming up and it's going to be bad. And so that means their profits are either less or not there at all. They may have losses. And during that time they have to make these payments or default on them which is basically a bankruptcy.

And so that means they have to dip into assets they have to either dip into any cash that they have on hand or sell off or finance certain assets that the company has it's very dangerous and they can get trapped backwards in this debt during a contraction of the economy or recession. Now this is pretty scary. This is corporate debt in China. And what's scary about it is this goes back to the beginning of this century and there is a one hundred thousand per cent increase in its more than 100000 percent that corporations have taken on debt. So the rate of growth here when this event happens it is going to be a global crisis. The magnitude of which we have never seen. It's going to be huge. This is going to drive gold and silver the main safe haven assets astronomical and you're going to see that at the end of this video back to the U.S. again. We have corporate debt again divided in to the GDP. So how much of the economy have corporations how much of corporations have they sold measured as a percentage of the economy. Have they mortgaged by taking out loans against it whether it's loans from private individuals by issuing a bond or loans by banks. And what you see here is that it was about twenty one point five percent of the economy here and now we're up at about 47 percent of the economy has been mortgaged. And these are the this is the corporate debt.