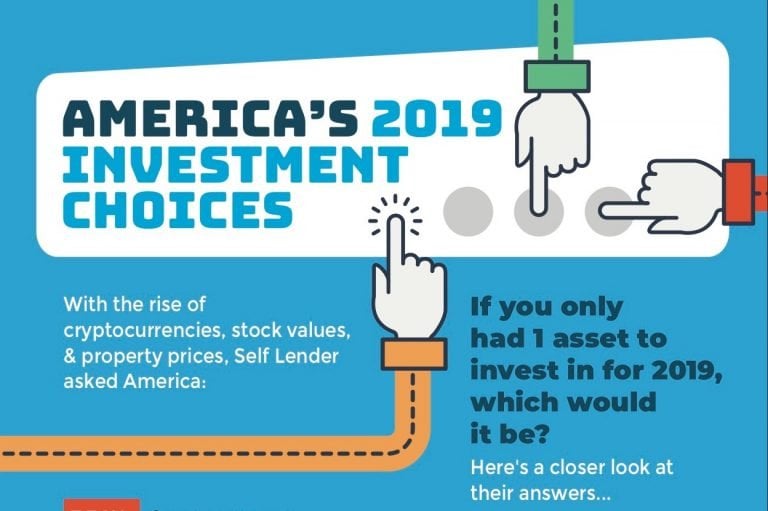 The world of retail investment covers a vast range of products that far exceeds just traditional stocks and share found on major exchanges. On the contrary, there are full range of asset classes that everyday investors can now speculate on with ease. In a recent study conducted by Self Lender, more than 1,500 Americans were asked what financial product they would consider investing in this year, if they could only choose one.

Those that participated in the study were provided with 4 different asset classes. Notably, this included bonds, cryptocurrencies, property, and stocks and shares. Interestingly, when the results were broken down by the participant’s age group, the outcome still remained consistent.

First and foremost, almost half, or 48.6% of those surveyed said that if they could only invest in one financial product, then it would be property.

This potentially comes as no surprise, not least because many would argue that real estate investment is an ultra-low risk, consistent and rental-yield generating investment. At the very bottom of consumer choice was that of cryptocurrencies and blockchain assets. For those unaware, this includes well-established cryptocurrencies such as Bitcoin, Ethereum and Ripple.

However, it should also be noted that there are now more than 2,000 individual cryptocurrencies available to buy, sell and trade on the open marketplace. In a nutshell, although cryptocurrencies offer investors the potentiality of high returns, they also carry a significant underlying risk.

To illustrate the speculative nature of cryptocurrencies, whilst in 2017 Bitcoin rewarded its backers with growth levels of more than 2,000%, the digital asset has since retracted in value by more than 80%. The Self Lender study also found that stocks and shares were the second most popular investment choice, with 28.5% of those surveyed selecting this as their number one asset class.

Since President Trump took over in office, the stock market has had a somewhat ‘topsy turvy’ performance record. Whilst between July and October last year the Dow experienced all-time highs, the industrial average has since plummeted. Once such example of this is Apple, who since becoming the first U.S based company to hit a market capitalization of $1 trillion, has since lost more than 33% in value.

Behind stocks and shares, 15.55% of those surveyed in the Self Lender study chose bonds as their most probable investment for 2019. Generally speaking, bonds are often seen as one of the lowest-risk investment classes for those looking to reduce cash-flow levels.

Whilst their returns are somewhat modest, they offer investors the chance to make slow and steady gains, which is highly suited for those that prefer lower risk investments. On the other hand, bonds generally require larger investment levels, much like in the case of real estate holdings.

When breaking down the results of the survey by age group, Self Lender found that property investments led the way regardless of age. When it came to cryptocurrencies and blockchain assets, those from within the 35-44 age group were most likely to make an investment in 2019.

This was of great interest, not least because innovative and emerging technologies are most commonly favored by those from younger age groups. However, this wasn’t the case with cryptocurrencies, with those from the 25-34 age group even more likely to invest in the digital phenomenon than the 18-24 group.

What didn’t come as a surprise was the fact that the 65 and over age group were the least likely to consider cryptocurrencies. In terms of stocks and shares, this particular asset class was most prefered by the 35-44 age group. This was seen as the least attractive option for the 45-54 age group, followed by the 55-64 demographic.

Back to cryptocurrencies, when the study looked at gender, it was found that men were 172% more likely to invest in cryptocurrencies than women. This appetite for risk was further amplified in the results, which also found that women prefer bonds and property by 27.7% and 10.3% respectively.

Survey Shows That The Northeast Have The Strongest Appetite For Risk

The final demographic that the Self Lender survey explored was the location of those that took part in the study. It was found that those based in the Midwest and North East were significantly more likely to choose stocks and shares, when compared against those based in the West or South.

Moreover, the North East had the strongest appetite for cryptocurrencies, with the west coming in with the lowest. In fact, the participants surveyed from the Northeast were 60% more likely to invest in blockchain assets than those from the West. Those based in the West instead prefered property, subsequently outscoring the Northeast by 26.98%.

Whilst it should be noted that the survey asked just 1,500 participants, and thus, the results should be taken with a pinch of salt, the outcome was nevertheless interesting. Ultimately, next year’s survey could yield significantly different results, which will depend on what sort of year 2019 turns out to be.

For example, should the performance of the Dow recover the all-time highs that it experienced in late 2018, then we could see a shift in investor attitudes towards stocks and shares. In effect, this also rings true for cryptocurrencies, should the digital phenomenon develop similar levels of gains that the markets saw in 2017.