ValueWalk
Home Stocks Stanphyl’s Short Position In The Japanese Yen, Waiting For A Default And...

Excerpt from the Stanphyl Capital letter to investors for the month of February 2019, discussing the fund continuing to hold a short position in the Japanese yen and BNDX and continues to own DBA.

*Yes, it’s our first-ever “performance asterisk”: as you undoubtedly know, we have a substantial short position in Tesla and tonight (February 28th) after the market closed the company announced major (and desperate) price cuts that drove the stock lower. As the fund’s positions are marked to 4 PM’s closing prices this isn’t reflected in February’s performance; if it had been the fund would have been up slightly this month, but instead it looks as if we’ll have a slight “head-start” for March. I now return you to our regular letter…

I continue to believe that what we’ve seen since the market’s late December low is a bear market rally, albeit a fierce one. The U.S. economic slowdown is in its early stages and we’re a long way from QE4; in fact the Fed is still removing approximately $50 billion a month from its balance sheet and likely will continue doing so until later this year, while real short-term U.S. interest rates are positive for the first time in over a decade. We thus remain short the Russell 2000 (IWM), an index which—despite incorporating almost a full year of drastically lower corporate tax rates—has a trailing twelve-month GAAP PE ratio of over 50 (and I strongly suspect that the “E” will go down this year). Elsewhere in the fund’s short positions…

Elsewhere among our short positions…

We continue (since late 2012) to hold a short position in the Japanese yen via the Proshares UltraShort Yen ETF (YCS) as Japan continues to print roughly 5% of its monetary base per year after nearly quadrupling that base since early 2013. In fact, of the world’s three largest central banks (the Fed, ECB and BOJ), the BOJ is now the only one still conducting QE and in February it reiterated its intent to continue doing so. In fact it’s in no position not to continue: 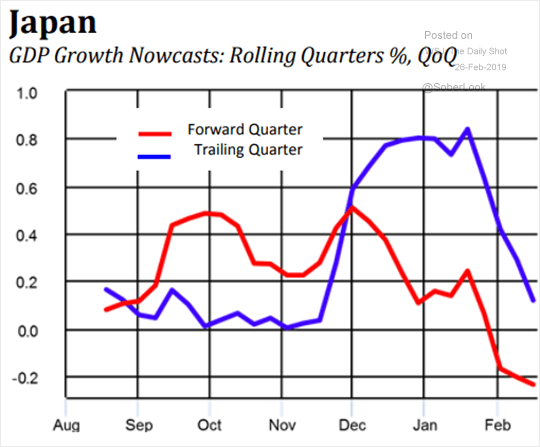 One result of this insane policy (in 2018 the BOJ bought approximately 67% of JGB issuance and in 2019 anticipates buying 70%!) is there are days when no 10-year JGBs trade in the cash market! The BOJ’s balance sheet is now larger than the entire Japanese economy-- it owns nearly 50% of all government debt and over 75% (!) of the country’s ETFs by market value:

When we first entered this position USD/JPY was around 79; it’s currently in the 111s and long-term I think it’s headed a lot higher—ultimately back to the 250s of the 1980s or perhaps even the 300s of the ‘70s before a default and reset occur.

We continue to hold a short position in the Vanguard Total International Bond ETF (BNDX), comprised of dollar-hedged non-US investment grade debt (over 80% government) with a ridiculously low “SEC yield” of 0.85% at an average effective maturity of 9.4 years. As I’ve written since putting on this position in July 2016, I believe this ETF is a great way to short what may be the biggest asset bubble in history, as with Eurozone inflation now printing 1.6% annually these are long-term bonds with significantly negative real yields. In mid-December the ECB halted quantitative easing, thereby removing the biggest source of support for those bonds’ bubble prices. Currently the net borrow cost for BNDX provides us with a positive rebate of over 1.7% a year (more than covering the yield we pay out) and as I see around 5% potential downside to this position (vs. our basis, plus the cost of carry) vs. at least 20% (unlevered) upside, I think it’s a terrific place to sit and wait for the inevitable denouement.

And now for the fund’s long positions…

We continue to own the PowerShares DB Agriculture ETF (DBA), which I first bought in late 2017 because agricultural products were the most beaten-down sector I could find that wasn’t a “buggy whip” (something on the way to obsolescence) or cyclical from a demand standpoint. The “DBIQ Diversified Agriculture Index” on which DBA is based is at its lowest level since 2002, and I continue to anticipate a major bounce following a favorable outcome from U.S. – China trade talks. In February China indicated it’s prepared to buy an additional $30 billion/year in U.S. ag products beyond the pre-trade-war level, and meanwhile  Trump is very conscious of the fact that farm states constitute a significant part of his political base and isn’t shy about demonstrating that on Twitter.