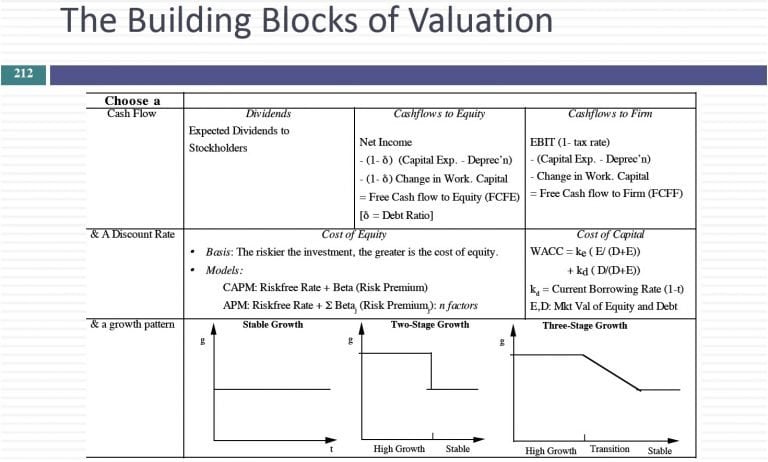 In this session, I started by looking at how to estimate growth when returns and margins are changing, and then moved on to terminal value. I argued that to keep terminal value in check, you need to follow four rules: (1) cap your growth rate (at the risk free?), (2) don’t wait too long to put your company into stable growth, (3) reinvest enough to sustain stable growth and (4) give the mature company all of the characteristics of mature companies. In the last part of the class, I looked at picking the right model to value a company.

Hi. That snow site is off great. I can't take the sun. I mean that was must have been one of the worst calls in history to call off school for today but I heard it's not NYU for it. It's actually the New York city's roads and public schools that apply. So New York City was stupid and NYU you followed. So that's out of the way let's let's get back to business. I mean I know we can meet physically but there's no reason why I can't get through the material I was planning to anyway. So today I want to complete my discussion of growth and turn to a number that scares a lot of people in this kind of cash flow valuation that terminal velvet closure number. I want to talk about the rules that you need to follow in estimating the terminal value and what keeps it in check. But let me start with cruft last session I talked about estimating growth using fundamentals right. I mean you look at reinvestment rate you know how much you reinvest and how well you reinvest and the product of those two numbers that gives you the growth rate that equation is a very powerful wind where I multiply the retention ratio by the return equity to get the growth in our earnings per share or the equity reinvestment rate by the return equity to get the growth and free cash or equity.

It's powerful enough that sometimes we lose consensus because we get so focused now need the equation is that we don't try to think about what we need to assume for it to fit those fundamental growth equations will give you were expecting growth rate if you're in steady state. What does that mean if your return on capital is stable and you reinvestment rate is stable then taking the product. Those two will give you the growth rate but the return on capital to be stable. Your margins have to have settled down. And for many companies returns on capital and margins remain in transition either young companies or older companies you can expect margin through Dodes And capital to change. So first I want to focus on what happens when you expect to return in capital to change and then talk a little bit more about a more general way of estimating growth.

It's expected growth rate for new investments will then be seventeen point to 2 percent that they expect to make our new investments times the fifty two point nine percent. About eight and a half percent 9 percent growth rate. Not bad right. But look at the second term equation you think what the hell are you doing. I'm taking the change and the return on capital which is about 5 percent over five years and I'm spreading it out over the five years because it's not all happening right away. It looks complicated by just looking at the compound effect if you're in a hurry you can just take the change and divide by 5 if you want but that extra growth rate. That I'm going to get because my return on capital is improving from 12 to 17 percent will make my growth rate sixteen point three percent that's almost doubling might grow trade because I'm bringing in the change and the return on capital. So if you break it down it turns out that the growth from new investments for Motorola will be the nine point two percent return Kapper times reinvestment rate but the change in my return on capital is creating another 7 percent.