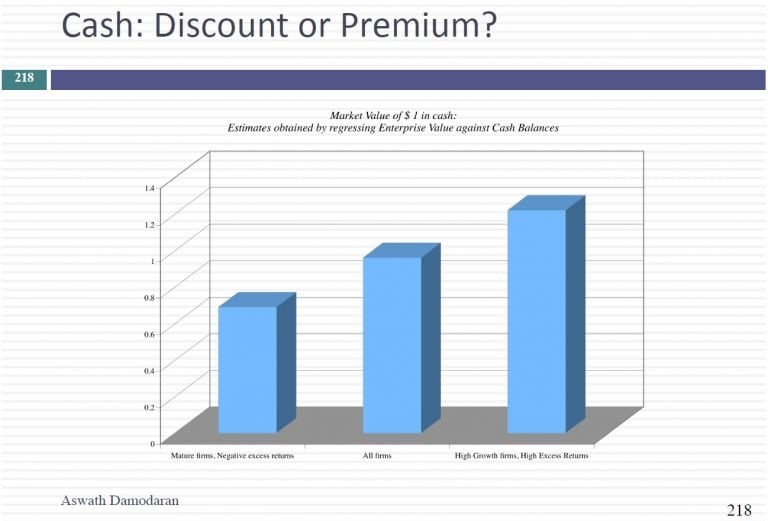 In today’s session, we started by looking at fundamental growth in all its variants. With EPS, net income and operating income, we argued that the long term or sustainable growth rate for a firm is a function of how much it reinvests and how well it reinvests, with the measurement of each varying depending upon the earnings metric. We then looked at the possibility of efficiency growth in the short term, as ROE or ROIC change, and finally at the most general way of estimating cash flows, where we start with revenues, then forecast margins and tie up loose ends with reinvestment, tied to sales. In the final part o the session, we looked ways to keep the terminal value from running away with your valuation by capping growth, limiting the growth period and reinvesting enough to sustain growth. I mentioned my incredibly boring paper on accounting returns.

Session 11: Picking A DCF Model And Loose Ends In Valuation

Today we're going to talk about actually doing the other part of your project where you need to get done getting a valuation of your project before we do that. Because in today's guys we're also going to talk about what I call two cents a few questions are very simplistic questions. Let's say you're thinking about investing in a close debt mutual fund to close the mutual funds traditional mutual funds. Most mutual funds are open mutual fund. So if you send your money to Fidelity Magellan what happens is that number of units in the fund expands and you get a share of the net asset value to fund a closed mutual fund is actually a publicly traded company. You buy shares in the company they invest your money in publicly traded stocks took the easiest of all companies value already owned and publicly traded stocks you can see the market. Price of those stocks.

So let's assume you're investing in a close didn't mutual fund invest in stocks you're required to given your risk free trade and risk premium is 10 percent that's what you need to make to breakeven. This fund is run by a guy called Omaha Oracle. I'm not even trying that hard to disguise who it is. And he's historically on 2 percent more than whatever you need to make if you need to make 10 percent he can make 12 percent if you assume zero growth.

Let's make this a simple math problem. Can you tell me. What premium this fund would trade that relative to its market value. Because remember the market relative to the Bollywood so don't a hundred dollars of stock you are investing in it. When are you going to be willing to pay a premium. And if you buy into that argument I want you to show me how much the premium this how would you solve this from 40 to set.

No it's actually more than 2 percent. Right now you're going to say Let's play a game let's assume you invest 100 dollars in this fund right. What are you going to make each year.

On an expected basis twelve dollars a year because he's going to make 12 percent. Remember he makes 2 percent more. So you make 12 dollars a year. That's your cash flow every year. There's no growth to get the present value of the twelve dollars in perpetuity what do I need to discounted by.

That 10 percent. You divide one by point one. You get a 120 dollars you're willing to pay 120 dollars for a company whose assets are all publicly traded but are you willing to pay that 20. Sounds like a mystery. Why would anybody do it. You're doing it because Omaha Oracle is running. Would it make a difference to you that the guy is 88 years old. Forever is a long time at 88 for you. There's no forever it is counted in days maybe weeks perhaps years. I don't want to be morbid but it's reality. Do you see what's going to happen to your premium. Everything is going to be around for only five more years. Two more years.

One more year 16 days two days one day 0 days scary thought but today we're going to look at books for way because in a sense it is an insurance company with a close and fun guy.