Metro systems are a science-fiction dream made real by 19th century engineers, and they continue to expand to this day. It’s remarkable to think that the first underground railway, the London Underground, was proposed when Jules Verne was still a toddler.

After London’s Metropolitan Railway was given permission to begin work on such a tunnel in 1854, it took just ten years for the Tube to become operational – astonishing when you think about how long it takes to get comparable projects off the ground these days. A century and half later, the Tube transports 1.17 billion passengers every year. Underground railways may be old news, but they’re not passé; as Popular Mechanics puts it, tunnel building may be boring, but it’s never dull.

But we take those Tube tunnels for granted now. Even air travel has lost its glamour – so who is going to notice how sci-fi their early morning commute is 250 days a year in the age of flying cars?

Not so long ago, in 2017, a group of Reddit users (a Reddership of Reddit users?) came to the realization that these underground spaghetti chains have been tying themselves in knots all over (or under) the world since before our great-grandfathers were born. And in a way, what the metro can offer us that flying cars can’t is a retro-future: context. A lot of surface life has happened since those trains started snaking around beneath our cities. There’s a lot of history in those tunnels, and in their connection with the world outside.

The, uh, Reddership realized that whole cultures have evolved upstairs, and while a lot of Metro stations are opened or permanently closed in response to traffic patterns between different neighborhoods, metro maps still tend to resemble abstract paintings rather than accurate depictions of where the commuter is in any given city.

They attempted to reveal the geography behind those routes that so many millions of us take each day by animating the abstract official maps against their own more geographically accurate ideas of where each train would take you. It was pretty cool, but still didn’t give much sense of the city outside.

So urban development researcher Martin Bangratz stepped up and borrowed an airplane photo of the city of London and superimposed his best calculations of where the various Tube lines go. It’s pretty cool.

Bangratz, who has a MSc in Sustainable Urbanism from University College London, was subsequently invited by the ever-curious geeks at QuickQuid to take his casual project one step further. Together they identified six of the oldest metro systems from our busiest cities, and set out to illustrate hi-res aerial images with the precise routes of their trains. Bangratz used Overpass, OpenStreetMaps, and the open source geographic information system QGIS, to figure out what was what. He then had to painstakingly trace each metro line onto the photographs, cross-referencing landmarks such as buildings, parks, and rivers to find his way. The results are fascinating. Let’s take a closer look at the metro systems he revealed. 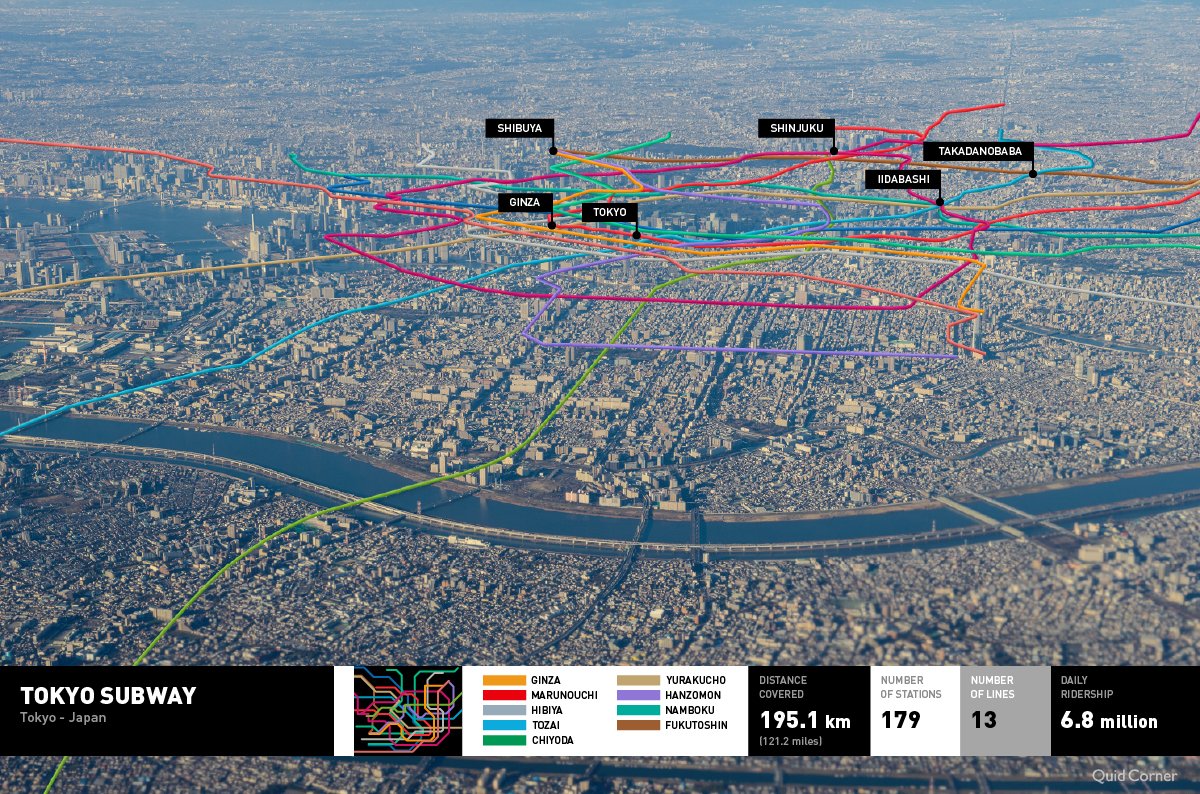 Japan boasts – if that’s the right word – 45 of the 51 busiest metro stations in the world. Tokyo’s metro system transports 13 billion people every year, across 179 stations webbed together by 195km of tracks. It’s a big’un!

Naturally, a metro system of this complexity requires excellent design to keep things running as smoothly as possible. Its coordinators subscribe to an approach known as ‘nudge theory’ – the idea that people can be subtly nudged to follow certain behaviors. The famous orderliness of Japanese salarypeople is not just an innate cultural sense that they are born with, but the result of ubiquitous signs and signifiers that teach people how to ‘use’ the city without them (usually) noticing that they’re being taught.

Mood lighting, jingles, and subliminal noises at frequencies that only certain age groups can hear, are among the tricks used to keep the system running smoothly. That’s why the multi-colored noodles in the image stay more or less untangled. 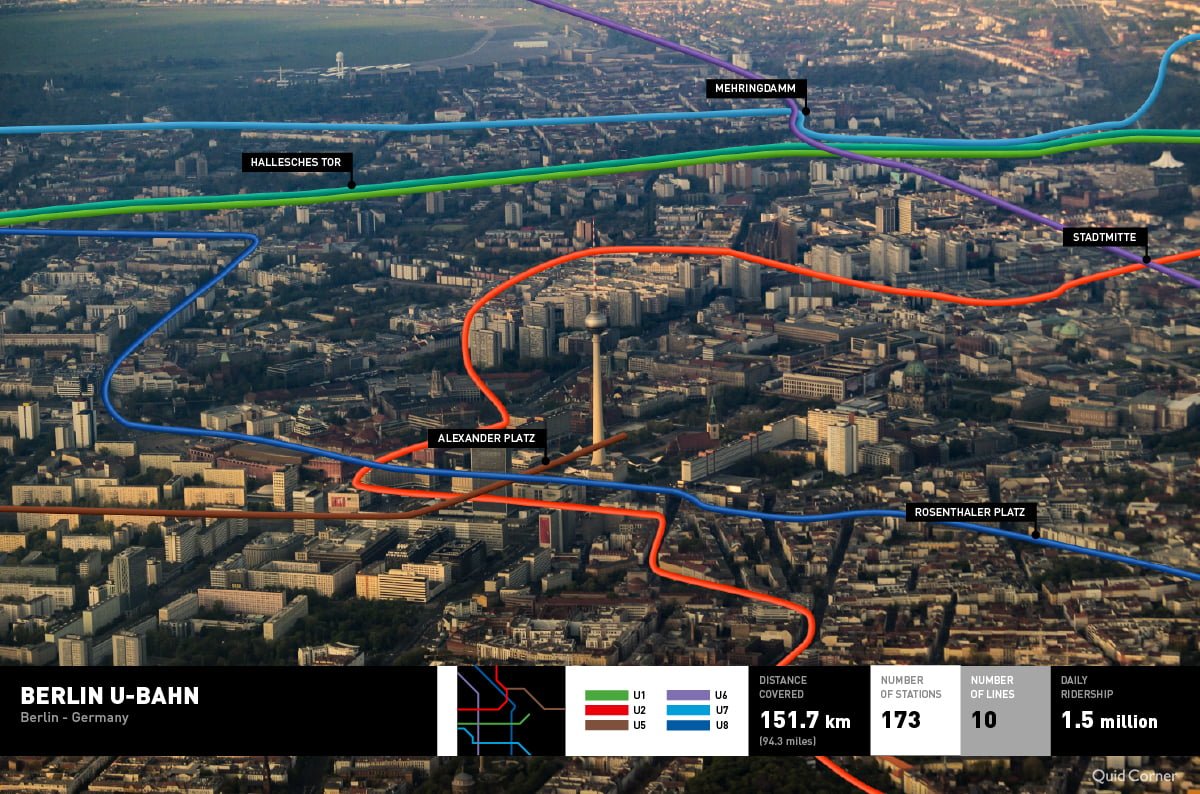 The Untergrundbahn opened in 1902 and users of its iconic yellow trains are trusted to buy their tickets and get onboard without negotiating ticket gates or admissions guards.

No, Berlin’s nudge theory is a little more severe: get caught on a train with no ticket more than once, and you’ll end up in jail with 7,000 other fare evaders.

It’s straightforward to orientate yourself on Berlin’s streets if you can spot the Fernsehturm TV tower. Bangratz’s map gives you some idea how close you are when you’re under the surface. 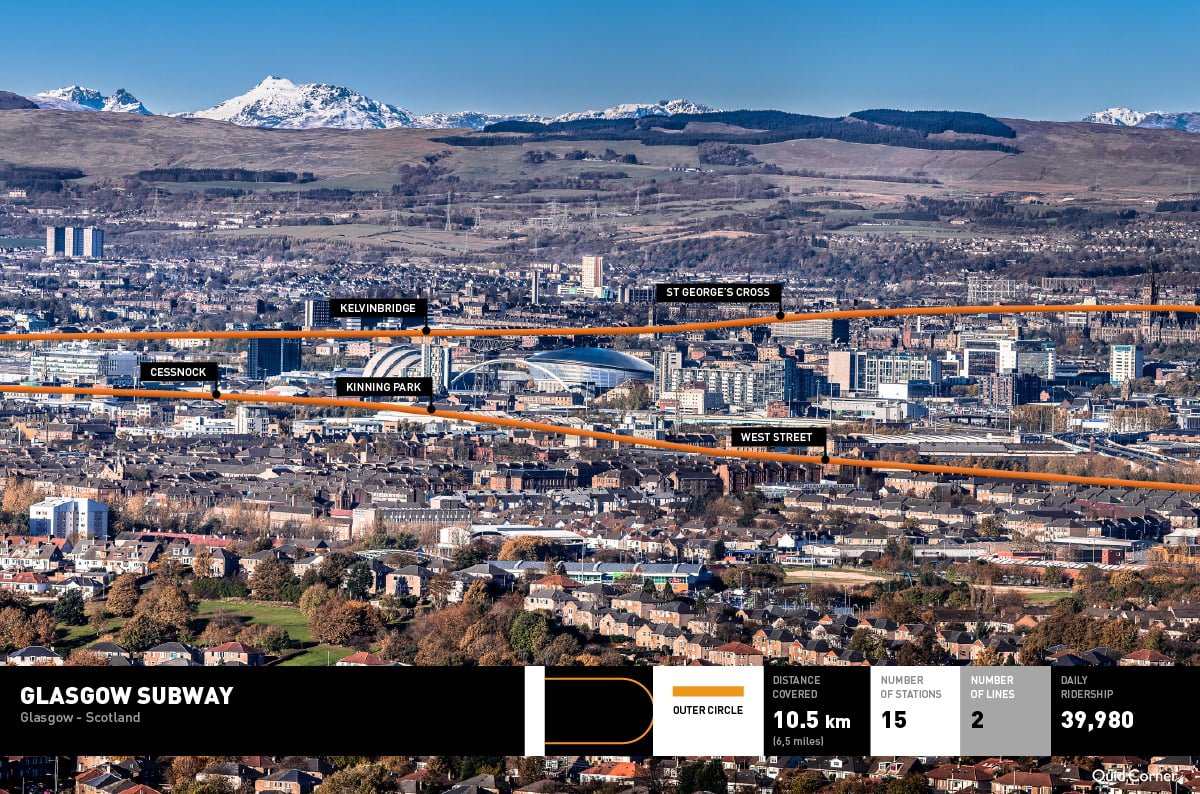 Glasgow’s ‘Shoogly Train’ – nicknamed for the way its old trains used to rattle their passengers around – is the third oldest metro system in the world. It may not be as big or busy as Tokyo, but it’s got character! 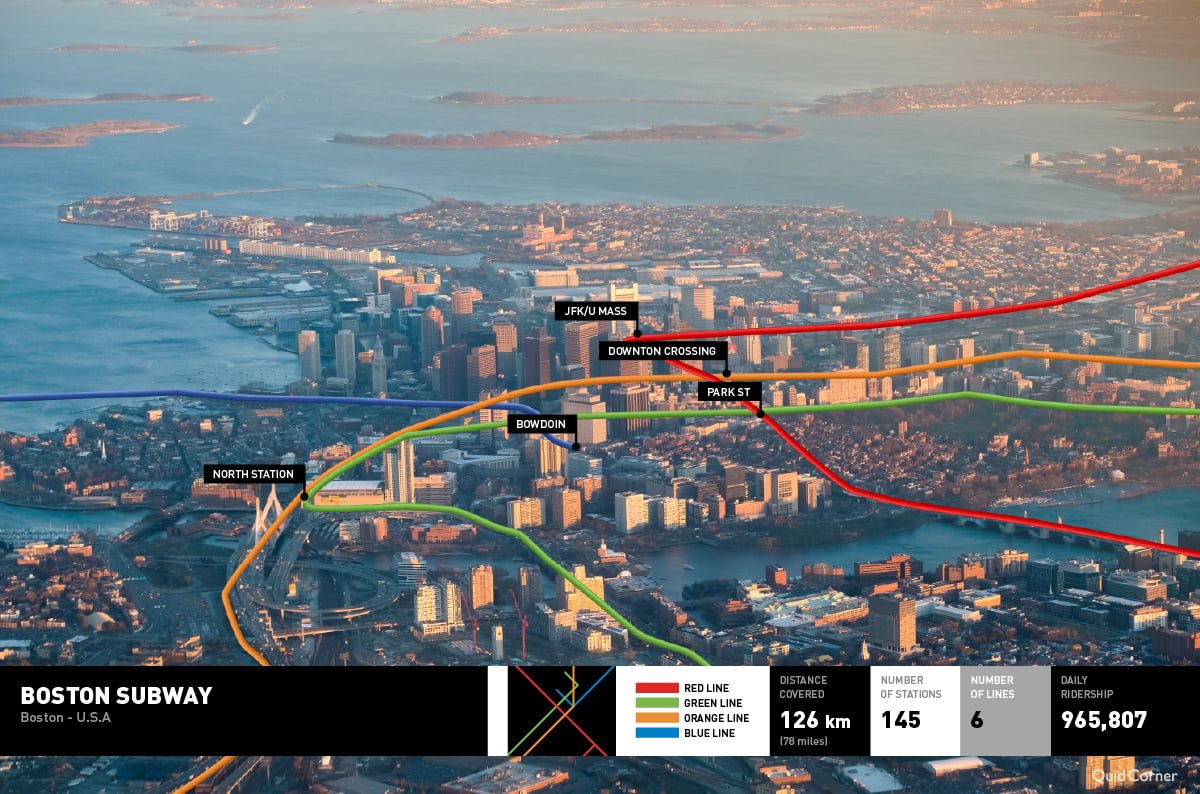 The USA’s first subway system was controversial at the time it was proposed. Conservative Americans were not keen on the idea of a rail network that was stinking and dirty like the London Tube was reputed to be. The metro had to take off in a city with dreadful winters, if anywhere at all. Grateful Bostonians were happy to hide underground away from the snow and wind, and the idea soon caught on across the States. 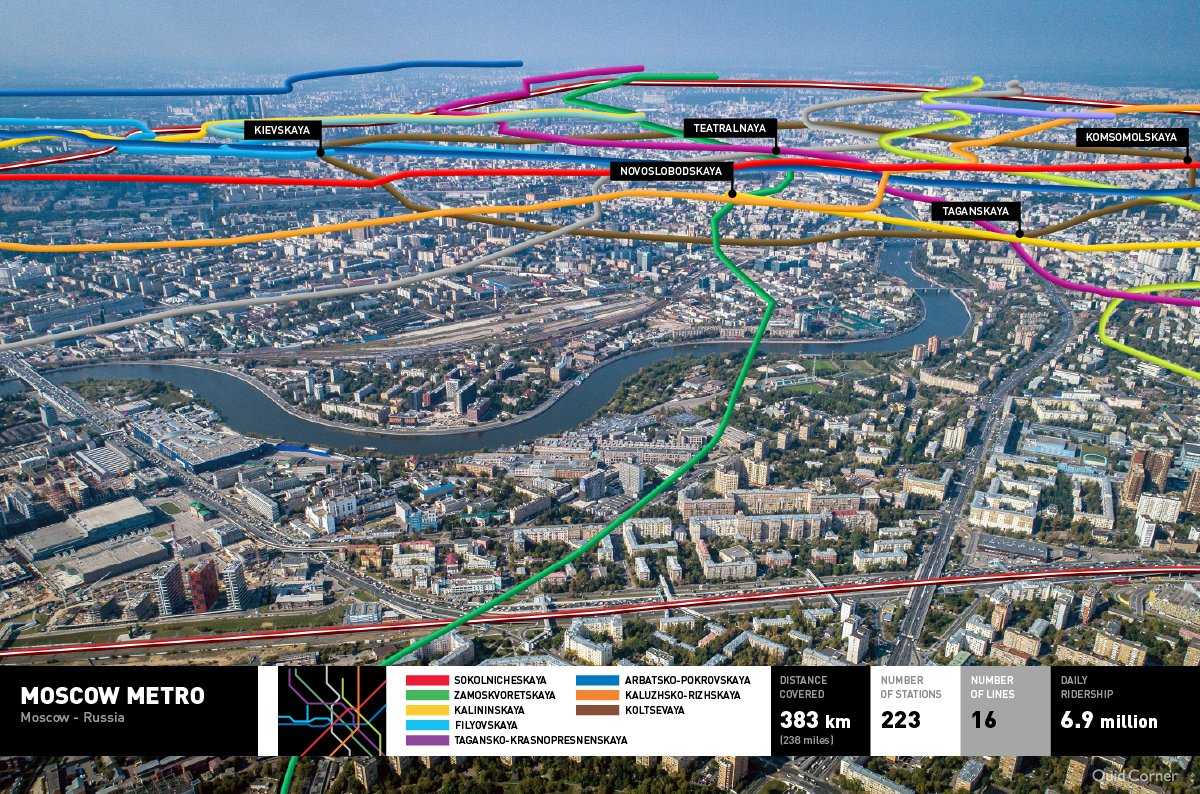 Moscow’s Metro opened as Stalin consolidated his power in the 1930s, and today it retains a melancholy atmosphere connected to the unthinkable atrocities he and his people committed. Thankfully, efforts to ‘de-Stalinize’ the metro began soon after his death. With sixteen lines criss-crossing Russia’s capital, it remains a key element of the city’s transportation infrastructure. 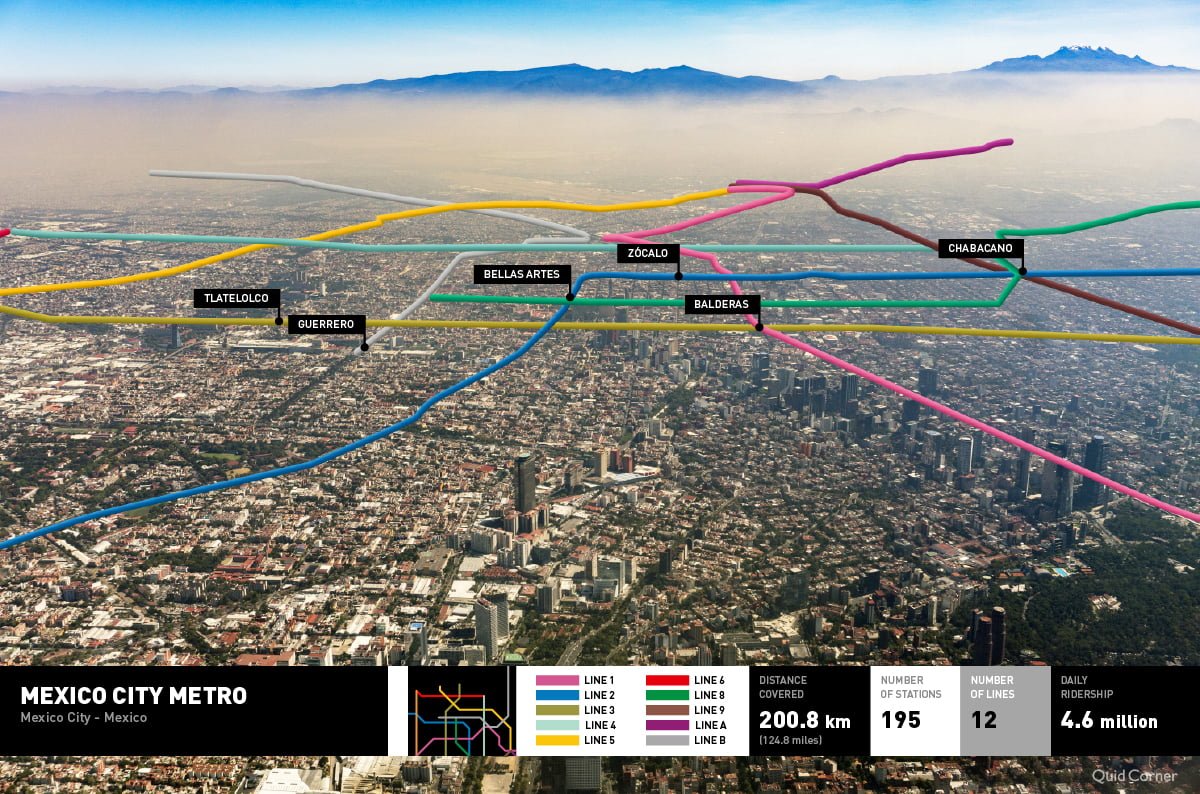 Mexico City’s underground may not be the largest, especially considering the ground it has to cover, but it’s one of the most unique. The trains’ rubber tyres are designed to protect against earthquakes; women-only carriages protect against sex pests; and each of the system’s 195 stations has its own identifying icon (such as the elephant at Talismán station) to make up for historically low literacy rates.

Next time you take one of these major city metros, you’ll have a much better idea what’s going on upstairs as well as downstairs!