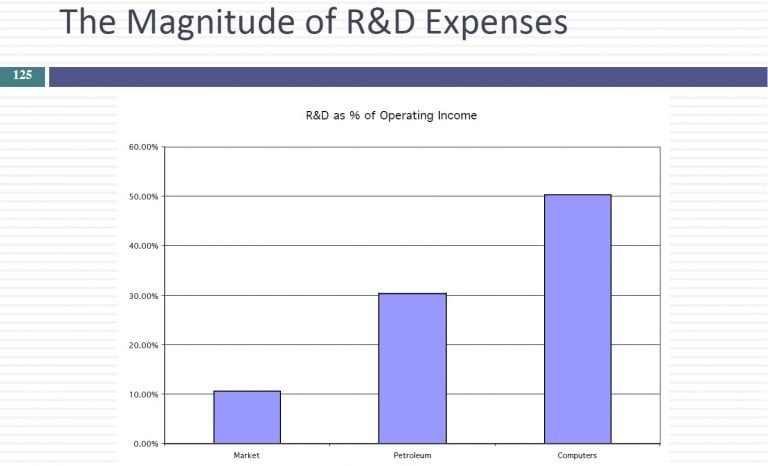 In this session, I start by tying up loose ends in earnings, capitalizing R&D, talking about adjusting for one-time charges and accounting fraud and tactics for negative earnings firms. I followed by looking at reinvestment in both long term assets (net capital expenditures) and change in working capital, and why accounting and valuation definitions vary. I ended by looking at historical growth rates, and why choices you make on operating metrics, how you compute averages and time periods matter.

So that cancellation made a lot of sense. This four feet of snow outside. I'm being cynical but does that cost you cost you about 275 dollars. And here's why. I worked out with the tuition how much a session cost and for better or worse you might want to build NYU for that. But enough of that. I don't want to cost you more. What I'd like to do is take what I'd have done in today's session and give you a webcast. That's the best I can offer. So if you remember in the last class we were talking about correcting for accounting and consistencies and we talked about leases and how we have to correct polices because leases are really dead. And how finally 2019 accounting is going to come to its senses and start doing the right thing. But the reality is most of you in fact all of you and you look at 2013 numbers looking at the old accounting leases that treated as operating expenses when in fact they should be financial expenses. So I'm going to clean up for that. I'm going to actually take leases and convert them to debt.

We went through that process and it's not complicated you take in lease commitments you discount them at your pretax cost of debt. You get a present value that present value is essentially the debt on your balance sheet. It of course means that if you adjust your operating income. Now let me take the other item that concerns me that I think is is treated inconsistently. We talked about capital expenditures as expenditures designed for future growth for the future rather than for the current. And if you define capital expenditures that way below our Indie's clearly CapEx when in fact it's treated as an operating expense.

The rationale accountants offer is it's uncertain because the benefits are uncertain you should not treated which is a strange definition because we don't use that dividing line of uncertainty with any other expense to either the plan to make a product or service in a highly competitive business where I might or might not make it.

You still treat that investment in the plant as a capital expenditure. I don't think there's any good reason for doing what accountants are doing. In fact it's a terrible practice some of us. I can't wait for it to come to their senses because who knows when that will be 2059 21 0 9 10 have no idea. So first thing to recognize is already is a big item in some sectors more in some sectors and in others technology pharmaceuticals lesson West Petroleum. You know the analogous expense for Indian in the petroleum business is exploration. So I'm arguing that this is a much bigger problem than just the R and D. IS are a bunch of expenses that accountants should be treating as skeptics and right now are treated as operating expense. So let's see the process by which we can convert are indeed from an operating to a capital expense. Again it's not complicated but it requires that you work through sequentially. The first step if you want me to convert indeed from an operating to capital expenses you have to answer a question and here's a question I'm going to ask you. What does the amortised life of our India saying What the hell are you talking about. On average how long does it take between the time you do R and D and a commercial product emerges from the warranty.

Notice or to the word on average or print because I know some of your and they will not work or work out some might work out for you or some insist some N10 I'm saying on average how long will it take. Nor does that answer the question it's going to vary across sectors. If this is the pharmaceutical business given that once you do are Indian a product comes out you've got to go to the FDA testing process and get approval. It might take 10 years if you are technology companies probably going to be more like two to three years. So that's my first question. Tell me on average how long it takes. I'm going to call that my amortise supply and here's what I'm going to do next. I'm going to go back and collect your R and D expenses each year for that period in the past so you're telling me your amortised life is five years I'm going to go back and get different. Last year. Two years ago three years ago four years ago five years ago you think why. Because if I decide to treat our India as a kopecks I kind just start as of right now. I've got to act like I've been doing it all along which effectively also means that my Arny expense is from five years ago rather than expensing it that I'd have written it off every year for five years. The are for us. In other words I'd have been capitalizing and amortizing it over time all the way through.

German software company let's assume the advertiser life here is about five years because this does business software and is probably going to take a slightly longer life than a typical tech company. So let's have a five year like for. I went back and got.