Last month, LG Electronics unveiled not one but two flagship smartphones at the Mobile World Congress (MWC) – the LG V50 ThinQ and LG G8 ThinQ. While LG Electronics might be struggling to revive its ailing smartphone business, the company’s latest flagship models are jam-packed with top-of-the-line features to take on the competition. Let’s dive into a detailed LG G8 ThinQ vs LG V50 ThinQ comparison to help you decide which device is better for you.

Both the devices look modern and impressive. But it’s clear from the looks that LG’s design team was reluctant to make any revolutionary changes. Barring a few changes, both the phones look similar to their respective predecessors. The LG G8 ThinQ’s dual camera setup is aligned horizontally instead of vertically on its predecessor. Also, there is no camera bump. The phone’s rear panel is protected by Corning’s Gorilla Glass 6, which gives it a glossy finish.

The LG G8 ThinQ measures 151.9 x 71.8 x 8.4mm, making it nearly identical to its predecessor. On the front panel, the G8 ThinQ gets a notch at the top and a chin at the bottom. The device comes with an IP68 rating for water resistance for up to 30 minutes at a depth of five feet. It also boasts MIL-STD-810G military-grade durability, meaning it has been drop-tested from shoulder height on rough surfaces.

The LG V50 ThinQ measures 159.2 x 76.1 x 8.3 mm and weighs 183g. Its dimensions are similar to its predecessor, but the weight is higher (183g vs 169g). Its rear panel is also protected by Corning’s Gorilla Glass 6. Just like G8, it comes with an IP68 rating for water-resistance and MIL-STD-810G military-grade certification.

LG Electronics claims the G8 display has an AI engine that automatically switches between color profiles depending on what’s displayed on the screen. It also supports HDR10 standard for streaming.

The LG V50 ThinQ gets a 6.4-inch FullVision OLED display with a 19.5:9 aspect ratio. The screen has a resolution of 3120 x 1440 and a pixel density of 537ppi. LG Electronics has also launched a secondary attachable screen to go with the LG V50 ThinQ. The second 6.2-inch OLED screen attaches itself to the body of V50 via a power-transmitting pogo pin. When you attach it, the primary display divides each of the screens into two. The second screen can also be used independently, allowing you to use two displays for separate purposes.

The G8 ThinQ runs Qualcomm’s latest octa-core Snapdragon 855 processor, which also powers many other flagship Android phones. The processor is paired with 6GB RAM and 128GB of internal storage. LG has also included a microSD card slot to let you expand storage by up to 2TB. It comes with Bluetooth 5.0 and USB Type-C port. The phone also has a dedicated key to launch Google Assistant from anywhere.

The LG V50 ThinQ also runs the same Snapdragon 855 chipset, 6GB RAM, and 128GB of internal storage. It has a new heat-dissipating vapor chamber system to manage heat generated by 5G radios. Just like G8, the V50 ThinQ supports external storage of up to 2TB via a microSD card slot.

The V50 ThinQ is LG’s first smartphone to offer 5G support. It features Qualcomm’s Snapdragon X50 5G modem and antenna modules integrated RF transceiver, RF front-end and antenna elements. LG has joined hands with Sprint and other carriers in the US to sell its 5G phone. The 5G compatibility makes the V50 more futureproof.

LG smartphones have always been known for their superior audio quality. The G8 ThinQ comes with Crystal Sound, which are small actuators that vibrate the surface of the glass to produce audio. That coupled with the bottom-firing Boombox Speaker will deliver audio with “improved quality.”

The V50 ThinQ features the same rear camera setup as the G8, plus a 12-megapixel telephoto lens. On the front, it gets an 8MP standard lens and a 5MP telephoto leans, meaning there is no Z Camera on the V50 ThinQ. However, both the phones get LG’s proprietary AI Cam feature that suggests filters and settings based on ambient lighting conditions.

The LG G8 gets a new security feature called Hand ID, which is missing from the V50 ThinQ. The phone uses its front cameras to recognize your palm for authentication. It’s unclear how popular the Hand ID feature would prove in the market considering you have to hold the phone in one hand and show the palm of the other hand in front of the camera. It means both your hands will be busy if you want to unlock the device using Hand ID.

LG Electronics has managed to pack a decent 3,500mAh battery inside the G8 ThinQ. That’s slightly bigger than the 3,000mAh battery in last year’s G7 ThinQ. The G8 supports wireless charging and Qualcomm’s Quick Charge 3.0 technology, which delivers up to 50% charge in just 15 minutes.

The V50 ThinQ gets a bigger 4,000mAh battery, probably because the 5G modems are power-hungry. It also supports fast wireless charging and Qualcomm’s Quick Charge 3.0, which delivers up to 50% charge in just 36 minutes. 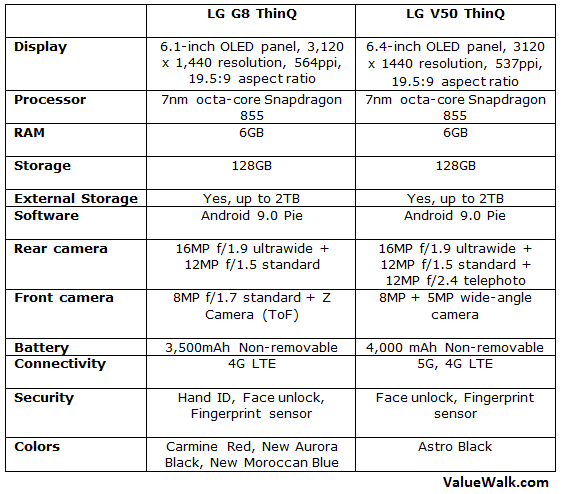