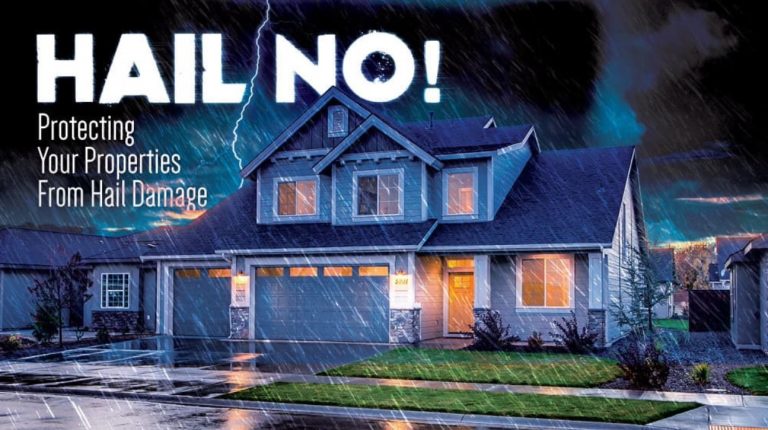 Hail comes from updrafts lifting water droplets into the sky, where they attach to each other and freeze into ice balls, growing as more water molecules join the party. When the winds allow the hailstones to fall they often remain frozen long after impact on the ground. And it doesn’t have to be freezing on the ground in order to get hail – if there’s a thunderstorm there’s a possibility for hail to form.

Hail hits the ground at speeds up to 90 miles per hour and sizes typically range from pea sized to softball sized. The larger the size of the hail, the more likely it is to cause damage to crops, property, and even people. Hail 1.5 inches and larger almost guarantees property damage, and the largest hailstone ever recorded was 22 pounds and had a 19 inch circumference.

One of the biggest problems with hail damage is that it’s not always immediately apparent. Hail can cause damage on asphalt roofs that is difficult to detect unless you get up on the roof and inspect it. This means that sometimes property damage isn’t discovered for weeks, months, or even years, and by that time there is often additional damage over time, making it even costlier to repair. Hail is also expanding in geographic reach, which means that homeowners who aren’t traditionally prepared for hail or know what to look for may end up with costly, unexpected hail damage.

Today there is artificial intelligence, sensors, and other technology that can make detecting hail damage easier, thus speeding up the insurance claim and repair process. Learn more about the cost of hail damage from this infographic.