Most hedge fund managers are starting to get their feet back under them, according to asset returns and flow data. In fact, January was so good for equity long/ short funds that they made back all the performance-based losses they racked up in all of 2018, according to data from Eurekahedge.

Hedge funds bounced back in January

The Eurekahedge Hedge Fund Index was up 2.32% last month, driven by the enthusiastic return to risk-on sentiment. However, hedge funds underperformed global stocks as the MSCI AC World Index gained 7.36% in January.

Preliminary January data indicates $22.1 billion in performance-based gains and $5.3 billion in net outflows. According to Eurekahedge, 73.8% of hedge fund managers were in the green in January due to strong positioning which benefitted from the "suppressed market volatility." In comparison, only 35.5% of hedge fund managers were able to avoid losing money in December.

As of the end of January, the global hedge fund industry had $2.3 trillion in assets under management, which marks an increase of 0.7% for the month. That's a significant shift from last year when the industry shed 6.3% of its assets throughout the entire year, which was the worst full-year decline since 2008. 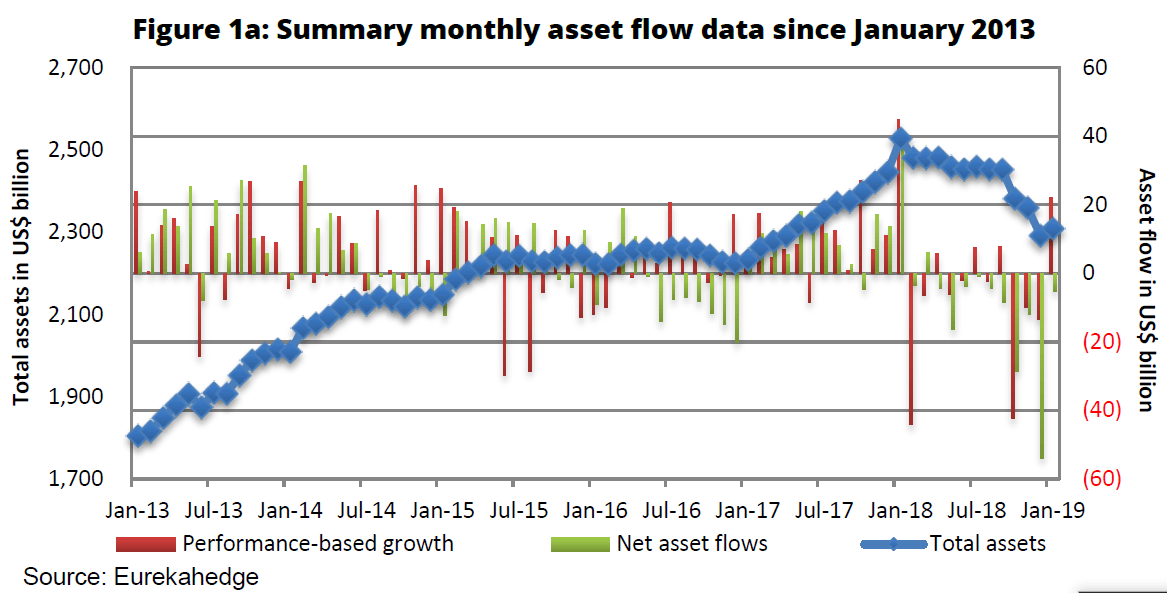 It looked like long/ short equity funds were finally getting their groove back in 2018, but then the fourth quarter hit. January brought a major rally for equity-focused fund managers, who must now be hoping that 2019 won't bring a jarring reversal of their fortunes again.

Long/ short equity funds recorded $23.1 billion in performance-driven losses in all of 2018, which was an exact match for the amount of performance-based gains they recorded last month alone. If equity funds can keep even a fraction of that pace up for the rest of the year, then this year will be much brighter than last. Long/ short equity funds were up 3.77% for January—the second-biggest gain of all the hedge fund strategies after event-driven funds, which were up 4.35% for the month.

Fixed income funds also had a strong January, racking up $1.4 billion in performance-based gains during the month as the high yield and government bond markets rebounded.