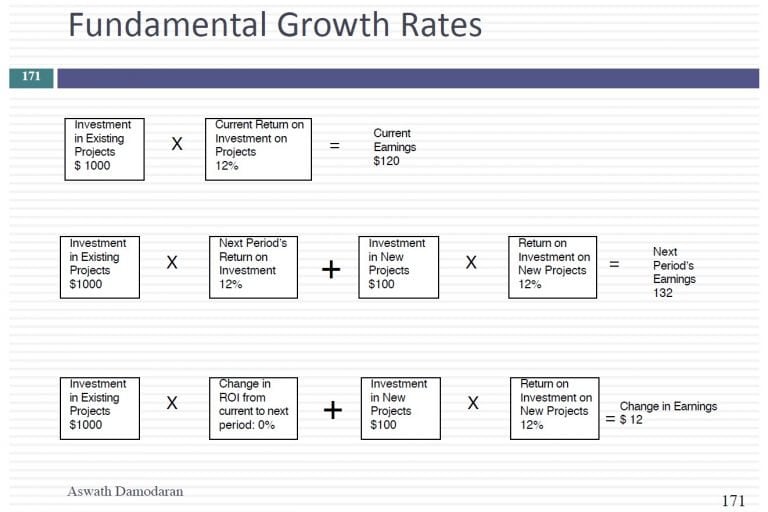 In this session, we continued our discussion of growth by completing our assessment of past growth, looking at the limitations of analyst estimates of growth and then examining the fundamentals that drive growth. Starting with a very simple algebraic proof that growth in earnings has to come either from new investments or improved efficiency, we looked at how best to estimate growth in three measures of earnings: earnings per share, net income and operating income. With each measure of earnings, the estimation of growth boiled down to answering two questions: (1) How much is this company reinvesting to generating for future growth? (2) How well is it reinvesting? (3) How much growth is added or lost by changes in returns on existing investments?

So let me start with a very simple math problem. Let's suppose you have a company let's replace the name LinkedIn something else because LinkedIn has been acquired by Microsoft it's kind of disappeared. But let's say a young girl company with 200 million dollars in revenue, so you're feeling very optimistic about the future. You put a 30 percent growth rate every year for the next 10 years. To 30 percent know one third. So I have a very simple question about what the notes are. Don't even try with the calculator because I want you to guess based on your gut. Let's see how much you kind of imbued the sense of compounding. I want you to tell me what the revenues will be in your 10 I go through the list. 500 million.

I wanted to remember that you know why because when you sit down to do your DCF valuation I'm going to ask you for a girl in the first five years you can try eight and you're going to get to know of at. Let me try 16. Be careful because a compounding effect is immense. When I put growth rates away I check to see whether my number is reasonable as I didn't look at the growth rate I look at my revenues in year 10 that is really the dead giveaway because you get 500 billion in revenues and you are 10 and your entire market is only 350 billion. You've got a problem. I think you're at 100 percent market share and you keep going and I don't think you can do that. So rather than look at rates because none of us has that I mean let's face it nobody is a prospect look at rates of 17 percent 15 percent. Look at the end revenues because that is the number that's going to tell you how much you're growing your company.

Some of them predict growth in revenues. But every single analyst to focus on partnership because that's the way they think about the world. What's the push to grow. And you think so what if you're building a valuation in your. Thinking about to grow trade to apply and revenues even if the analyst is right about that growth trading earnings per share don't apply to revenues because earnings per share grows faster than net income. The simple rule is as you climb up the income statement you've got to get more and more conservative about your growth trend. And here's why at each stage leverage helps you read revenue growth of 5 percent because your fixed costs will translate into a 10 percent operating income growth. 10 percent operating income growth because of interest expense would translate to 15 percent net income growth and then 15 percent net income growth for most U.S. companies would translate into a 20 percent growth in earnings per share.

What doU.S. companies do especially in the last 20 years that's made the push share growth. They buy back stock and that's part of the reason earnings per share growth even if you think it's right cannot be the growth trade use when you project revenues and operating income. We're also going to talk about fundamental growth. So let's assume that a company has aftertax operating income of 75 million on revenues of Abedi.

How much will it grow.

Same invested capital the same return on capital its growth rate is going to be zero percent. So for this company to grow what did the two do. What are the two ways it can grow. One is it gets.