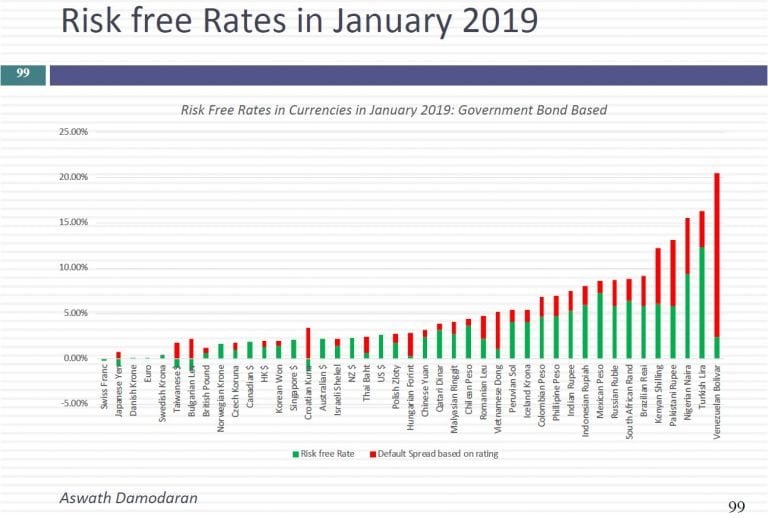 We started this class by tying up the last loose ends with risk-free rates: how to estimate the risk-free rate in a currency where there is no default free entity issuing bonds in that currency and why risk-free rates vary across currencies. The key lesson is that much as we would like to believe that risk-free rates are set by banks, they come from fundamentals – growth and inflation. I have a post on risk-free rates that you might find of use: http://aswathdamodaran.blogspot.com/

You know basketball game could be dangerous to your portfolio right. For example last week a viewer said you know it's a classic example of specific risk you think you're protected until you're not. But nothing you can do about this country. So last session we've talked about risk that matters and risk that doesn't happen from the perspective of a diversified investor. I'm going to suggest a task that might be that that you might find useful to kind of allow you to differentiate. Just pick up the Wall Street Journal on any given day and start reading through the news stories and with each one I want you to stop and ask Is this firm specific risk or is this market risk might sound like a waste of time. But you'd be amazed at the end of even reading one day's paper. How much of the news you read is company specific. I'll give you an example on Friday. Kraft Heinz reported a collapse in the stock price collapsed. Company specific risk markets risk.

Obviously company specific risk. Does the fact I got it. Thank you. It's working. Yeah. Hey does it make a difference that Warren Buffett. Is one of the largest investors and Kraft. From the perspective of Forbes specific in market risk.

Probably not. But for some people it might mean the end of the woods right. Because to them what Warren Buffett says is about the entire markets if he makes a mistake the word is essentially going to end that's agrarian China trade talks.

China trade talks to some pause I the smoke signals have been coming I've tried not many months. Positive negative positive smoke signals over the weekend. Company specific risk or market risk. Market is great why because it's China and that reason I say that of Nigerian trade talks was sending smoke signals out it might not be market driven because only oil companies in a subset of companies might be exposed to that and that's what I want you to do is read the news story and and from a gender perspective make reading the news and active pursuit rather than passive every news story. Don't take it as a news story as because of everything as a corporate finance spin to it put the corporate finance spin on it because that's how things get cemented. So last session we also started under screenwriter's right. If you have an entity that is viewed as the default free and we use cripple as our proxy for them to cheating. But we did it anyway. We said you can yet take the government bond rate preferably a long term government bond. Why? Because much of corporate finance and valuation is long term and just use the government bond rate. So we used the term bond rate as a risk free rate for US dollars for years we use the German euro bond rate and again be very clear about why we're using the German euro bond rate. It's because we want a default free rate in euros.

We can use the Greek rate, the Spanish rate, the Portuguese rate, or even the French rate, because they all have default risk. But then we got to difficult currencies difficult because there is no default free entity and that cards using example of the Indian rupee can look up a government bond rate but you cannot use that as your risk free trade because the Indian government is the fortress. So here's what we did. We estimated a default spread for the Indian government I think it was2.5 percent. We subtracted that from the government bond rate to come up with the rescreening but at that time many would say. Where did that default spread come from because if you have the default spread getting worse Crede rate is easy I sent to my practice video on how I went through this process. Let me give you a very quick summary of the three ways you can get a sovereign default spread. The first is if your government has dollar denominated or euro denominated bonds you just got lucky. It's taken as an example the Brazilian government in November of 2013 four point twenty five percent was a ten year dollar denominated bond rate issued by the Brazilian government. How does that help. Because I know what the risk free rate is inU.S. dollars. I a bond rate. The difference between the4.5 percent that I observe for the Brazilian born and what I observe for the bond has to be a default spread. And I can do this for any government that has dollar denominated bonds. If you gave me a Polish Euro denominated born and their opponents your denominated bonds would do that. Compare that to to get the default spread for Poland not the bond rate but the German euro bond rate. Basically as long as ever default freetrade I can compare them. This works for about 25 countries which.