1) With Alphabet reporting earnings last night, my three favorite tech companies (Alphabet, Facebook and Amazon) have now reported Q4 earnings, all of which were exceptionally strong with revenues up 23%, 30% and 20%, respectively. Meanwhile, Apple’s revenues declined 5%, continuing five years of stagnation. Simply put, Apple is too big to grow much from here.

While tech stocks are often driven by revenue growth, eventually it’s profits that matter – and in this area, Apple reigns supreme as the most profitable business on the planet, with 2018 operating income nearly matching Alphabet, Facebook and Amazon combined.

The trends, however, are not in Apple’s favor, as you can see in this chart I put together showing each of the four companies’ operating income over the last five years (I put Apple on a separate axis so you can see the growth of the other three): 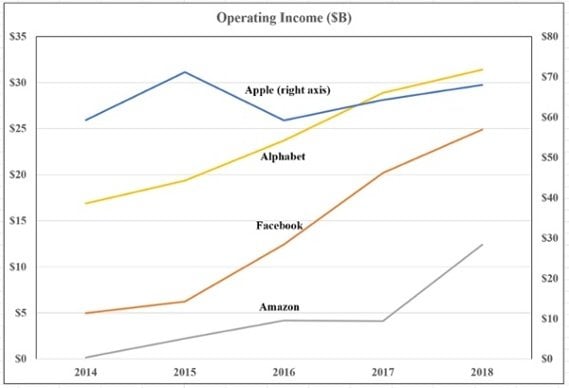 I continue to think the Apple will perform, as best, in line with the market, while the other three will outperform substantially over the next 3-5 years. For more on this, see my article from last July, Why I like Alphabet more than Apple — and Buffett doesn’t. Excerpt:

Apple has a fabulous business model, but Alphabet’s is even better in my opinion. Apple actually has to do things: develop and have manufactured a physical product, ship it all over the world, carry inventory, operate stores, etc. And its business model has some real risks: At its core, Apple is a device maker. And the tech world is littered with the carcasses of failed device makers like Palm, Motorola, Nokia and Research in Motion.

In contrast, Alphabet’s business is information and it only has to deliver electronic bits and bytes, so it can expand to serve every human on earth at virtually zero incremental cost.

Just think about it: One company make a fabulous gadget, while the other puts all human knowledge at your fingertips in milliseconds. Which one do you think is going to grow faster and be bigger in the coming years?

2) Facebook’s earnings were especially strong. This is the chart I follow most closely (from the earnings deck), which shows how the company is rapidly increasing its monetization of its users in every part of the world: 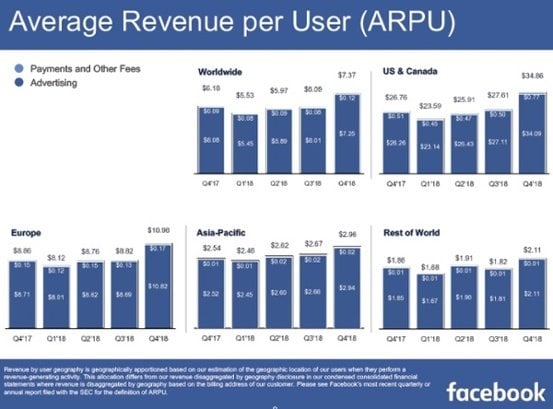 PS—I got a kick out of this: Facebook founder Mark Zuckerberg's first TV interview in 2004 on CNBC

3) There are so many things to admire about Elon Musk and Tesla – yet also so many red flags that, if Tesla blows up, everyone will say it was so obvious (but real time, it’s not): a pathologically lying CEO (I love the “FUNDING SECURED” shirt Carson Block sent me!); massive, inexplicable turnover among senior executives (especially in the financial area, most notably the CFO now leaving; here’s the full list); more than 500 lawsuits (here’s the list); a terrible balance sheet, etc., etc.

But customers love the cars, as this article notes: Tesla Model 3 tops list of vehicles that ‘bring the most joy’. And here’s Joe Rogan, a hardcore old-school muscle car type of guy – watch the way he talks about his new Tesla 100D here.

"This car is a paradigm shift in automotive technology. This is an electronic car assembled by Silicon Valley engineers using smartphone and laptop-quality engineering," said Munro.

…“It has a much, much different level of performance. It blows the other automakers out of the water," Munro said. "The Detroit boys better wake up and smell the roses. It's not just autos. Tesla is more advanced than the aviation and defense industries we also assess. We benchmark other systems to what Tesla is doing."

But when it comes to manufacturing, Tesla trails the pack.

4) Someone sent me this link to a public Dropbox folder with Q4/year-end letters from 54 funds including Baupost, Oakmark, Longleaf, Sequoia, Greenlight, Pabrai, Third Avenue Value and Bill Miller.

5) Following up on my last email, Hulu also has a documentary about the Fyre Festival, here’s an article about the ridiculous pitch deck for it (The Leaked Fyre Festival Pitch Deck Is Beyond Parody), and here’s more about Purdue Pharma and the Sackler family’s role in the opioid epidemic (The Family That Built an Empire of Pain).