ValueWalk
Home Info-Graphs The World’s Richest Women – What Do They Have In Common? 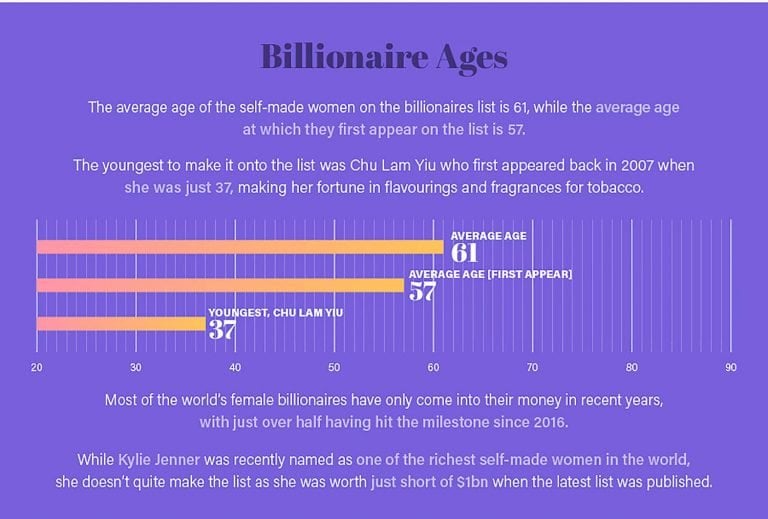 According to Forbes’ list of The World’s Billionaires, there are female billionaires in the world than ever before, a fact which has been celebrated in new research on the world’s richest women by I Saw It First.

While there’s currently 256 female billionaires in the world, the research took a closer look at the 66 who are ‘self-made’ to see what they had in common, from the age they made their first billion to the path they took to reach the milestone.

Overall, the 66 billionaires have a combined wealth of over $172.7bn, although you may be unfamiliar with the woman who took the crown as the richest.

A real ‘rags to riches’ story, Zhou Qunfei lost her mother at a young age, before leaving school at 16 and starting her own company, which now produces touch screens for the likes of Apple and Samsung and has made her a personal net worth of $7.8bn.

In fact, considering their vast wealth, many of the world’s richest women aren’t that well known.

For example, second place was taken by another Chinese businesswoman, Wu Yajun, who co-founded her own successful real estate company and is worth $7.7bn, while the third spot goes to Pollyanna Chu, from Hong Kong, who is worth around $7bn

More familiar names on the list include media mogul and former talk show host Oprah Winfrey ($2.7bn) and Denise Coates ($5bn), who owns online gambling company bet365, while reality TV star Kylie Jenner narrowly missed out on the list with an estimated net worth of $900m when the list was compiled.

So, what did the world’s wealthiest women have in common? The research found that China and the USA are definitely the places to be for women aspiring to join the four comma club, with the two countries producing exactly two-thirds of the world’s self-made female billionaires (29 from China and 15 from the USA).

It’s actually the billionaires who hail from Hong Kong who have the highest net worth though, with an average of $3.65bn, while those from India had the least with $2.25bn.

In terms of age, the billionaires have a current average age of 61, although the age at which they made their first billion averages out at 57.

In fact, many of the world’s female billionaires have only come into their money in recent years, with just over half of those studied reaching this point since 2016.

The woman to hit the milestone at the youngest age is Hong Kong fragrance and tobacco supplier Chu Lam Yiu who made her first billion at just 37, although as we mentioned, Kylie Jenner is set to smash that record at the age of just 21.

When we break things down by industry, we actually see that the world’s richest women have made their billions from a fairly wide range of industries, from retail to tech to food and drink.

The most popular, however, were real estate (8), food (5) and fashion and pharmaceuticals (both 4).

The research also took a look at the educational path that the world’s richest women took to reach where they are today.

While it’s no surprise to see institutions such as Harvard Business School coming out on top, it’s fairly inspiring to see as many as ten of the women on the list never progressed further than a high school education.

In fact, two dropped out of high school entirely, including the world’s richest self-made woman Zhou Qunfei, who we’ve already mentioned, and Chan Laiwa, whose family were too poor to continue sending her to school.

After this though she started her own furniture repair business, before moving into property and she now owns one of the biggest real estate companies in Beijing.

A further two of the women (Gail Miller and Johnelle Hunt) did attend university but dropped out before finishing their degrees.

Finally, the research looked at the social influence of the self-made female billionaires, which revealed that despite being among the richest people in the world, most prefer to keep a relatively low profile.

In fact, of all 66, only twelve women had public social media profiles (that could be found!) and only four have a social media following of over 1 million people.

In terms of who came out on top, it’s no surprise to see that Oprah Winfrey has the largest following, with just shy of 70 million followers across four different platforms, which dwarfs the 2.8 million of Meg Whitman in second place and actually is over eight times as much as the rest of the women combined.

It’s an interesting piece of research which showcases the women who have forged their own path in industries which are often male-dominated to make a success of themselves and shows that great riches are available to those of any background, with a range of national and educational backgrounds represented.

If you want to see the full research for yourself in a visual format click here to see how the world’s richest women compare. 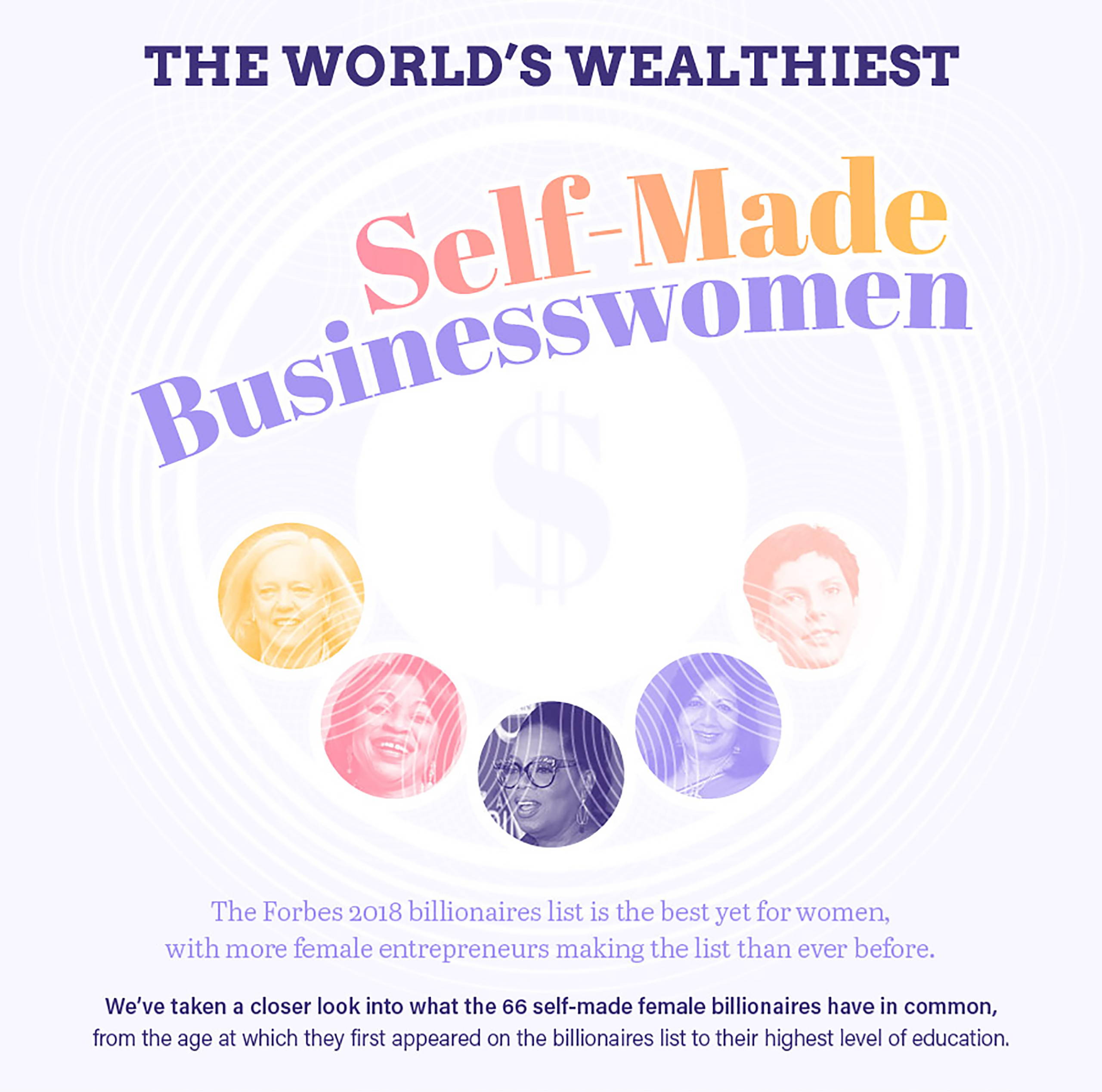 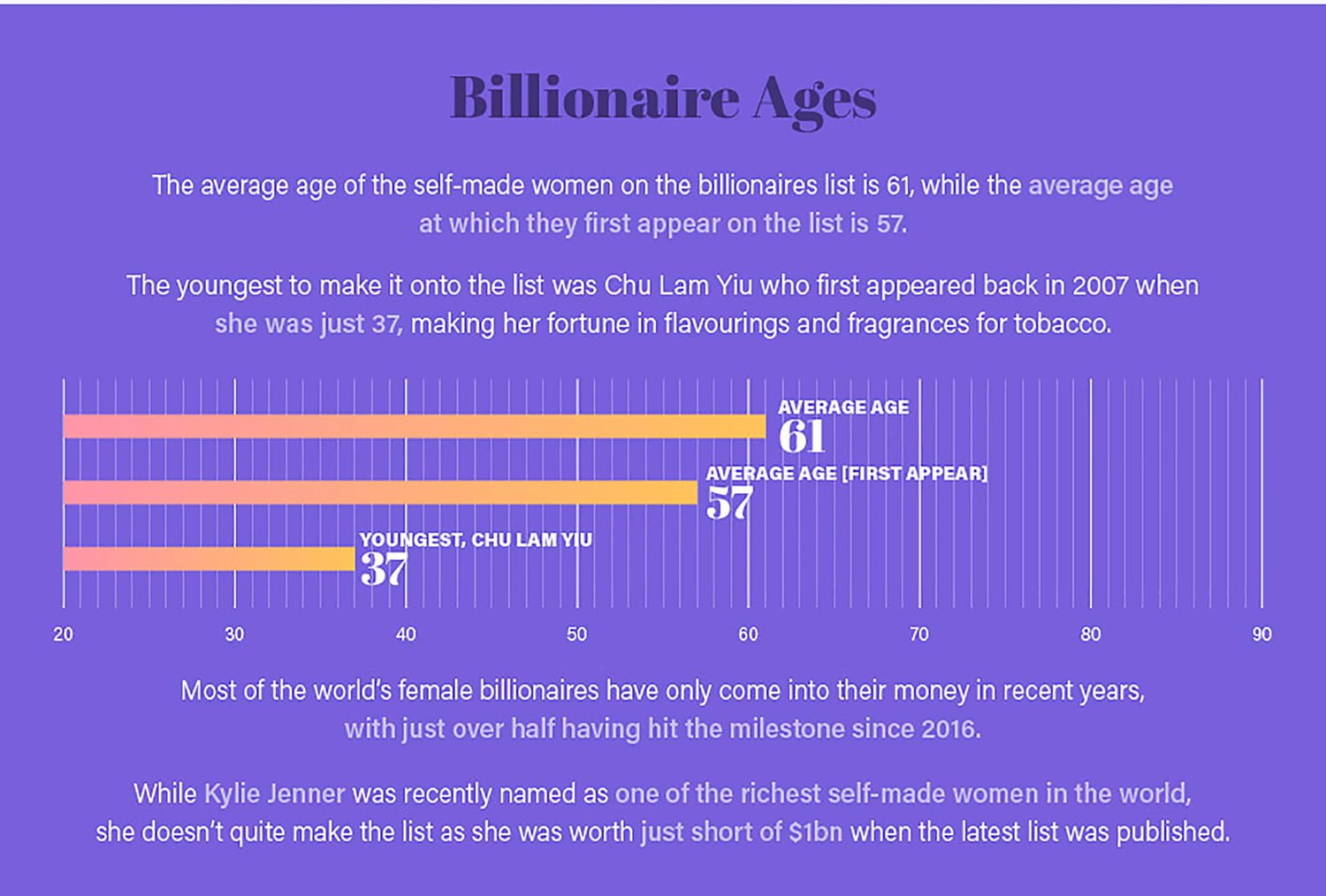 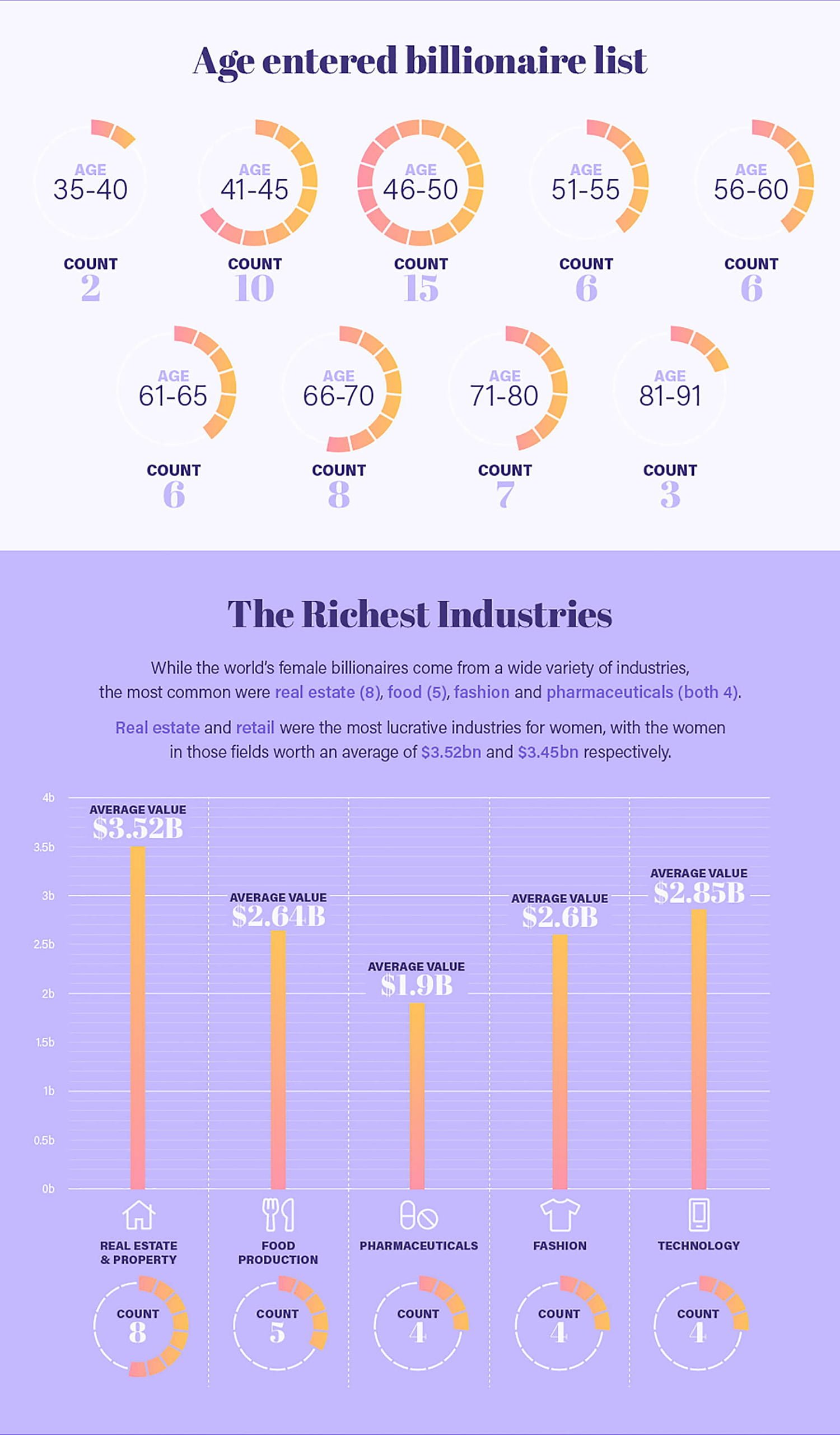 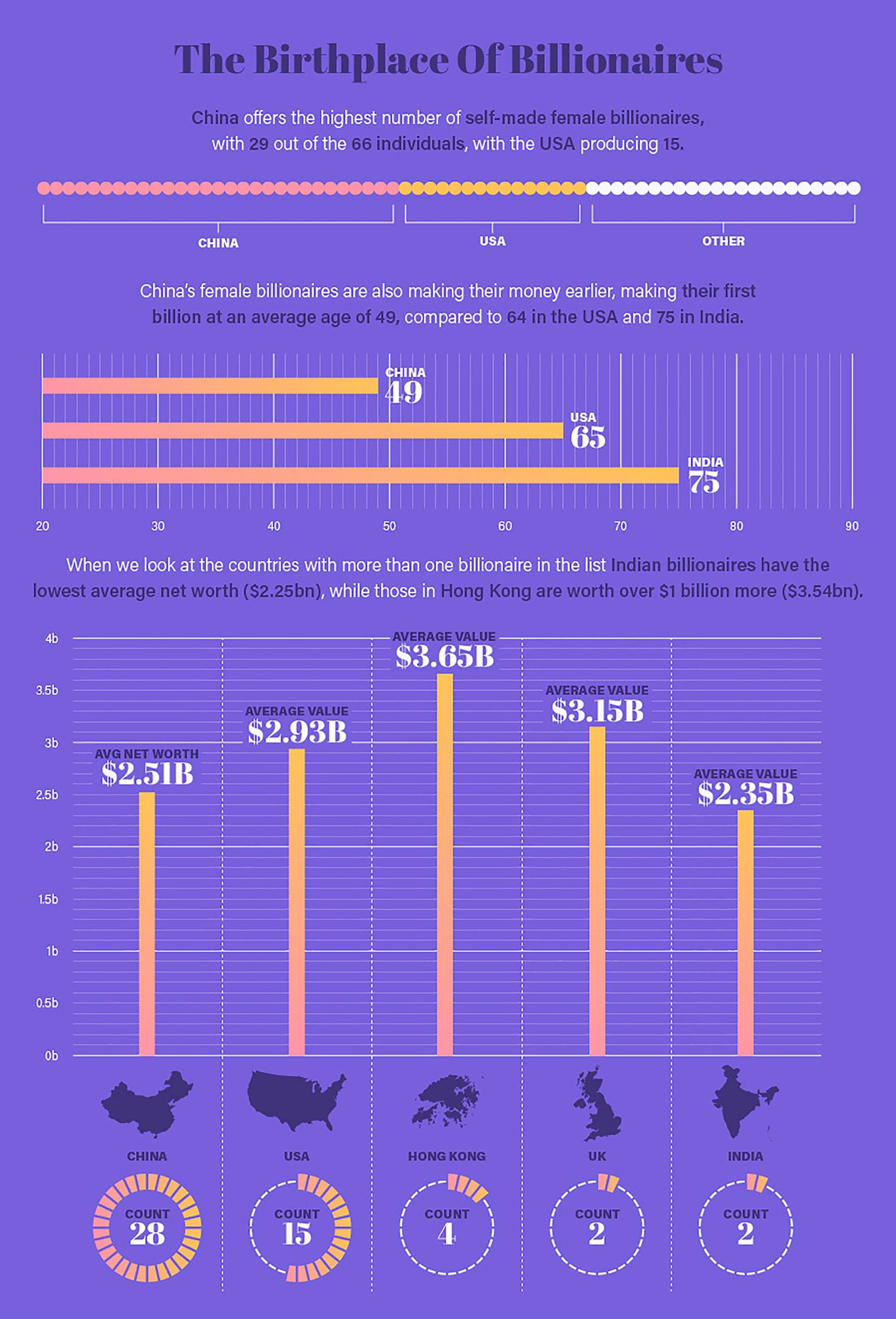