bStanphyl Capital commentary for the month ended December 31, 2018, discussing the likelihood of a U.S. ag-favorable deal with China and dirt cheap  Russell 2000 stocks.

Since 2017—when the Fed began raising rates in earnest and both the Fed and ECB announced timeframes to begin quantitative tightening—I’d been anticipating a bear market. It seemed obvious to me (and perhaps to you) that this entire bull market was based on artificially low interest rates used to justify egregious earnings multiples on stocks and to create those earnings via cheap mortgages, auto loans, debt-financed stock buybacks, etc., and that once rates began to normalize and excess liquidity was withdrawn, stocks would sell off heavily. I also believed (wrongly!) that stocks would start discounting those higher rates and that liquidity withdrawal a while ago, and the fund thus suffered through two years of awful performance. However, after lamenting for much of that time in this Russell 2000 stocks space about being unable to find anything cheap enough to buy, I’m happy to report that thanks to Q4’s broad-market correction I was able to add multiple new deep-value microcap long positions to our portfolio .

As to where the broad market goes from here, I think the answer is “probably lower” as the economic slowdown is still in its early stages, yet on a short-term basis the market is very oversold and therefore a rally before new lows wouldn’t surprise me. Thus, in mid-December (a bit too early!) I closed out our IWM short position, not wanting to give back the hard-earned gains we had from it. (I did not, however, reduce our Tesla short position and don’t expect to until TSLA = ZERO.)

But if I think stocks are eventually going lower, why am I buying here? Three reasons:

We continue to own the PowerShares DB Agriculture ETF (ticker: DBA), which I first bought late in 2017 because agricultural products were the most beaten-down sector I could find (the “DBIQ Diversified Agriculture Index” on which DBA is based is at its lowest level since 2002) that wasn’t a “buggy whip” (something on the way to obsolescence) or cyclical from a demand standpoint. In November I added to the position, anticipating a bounce following a favorable outcome from the Trump – Xi Jinping trade summit in early December, but that bounce hasn’t yet materialized because although China agreed to immediately resume some agricultural purchases, the amount bought (so far) has been nowhere near enough to absorb the market’s excess supply. Nevertheless, I remain confident that a U.S. ag-favorable deal will occur during the current 90-day negotiating period with China, as Trump is very conscious of the fact that farm states constitute a significant part of his political base and isn’t shy about demonstrating that on Twitter: 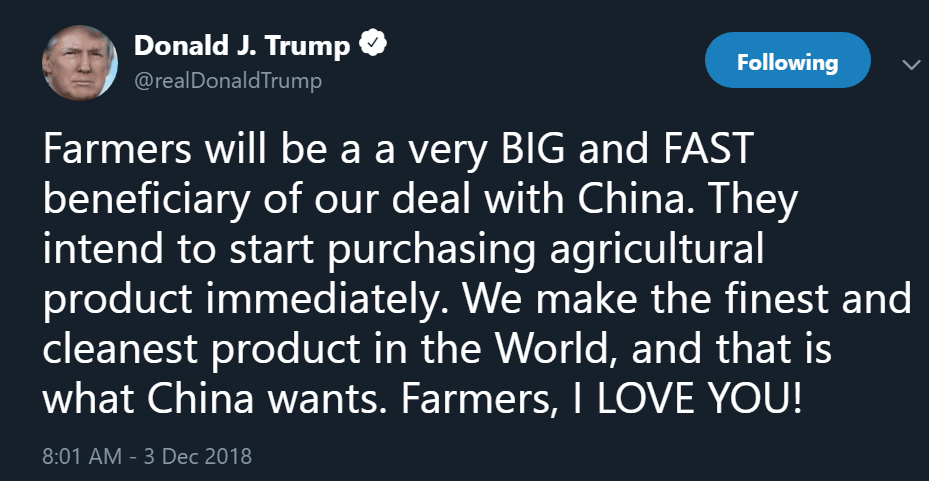 And this past weekend Trump indicated that real progress was being made: 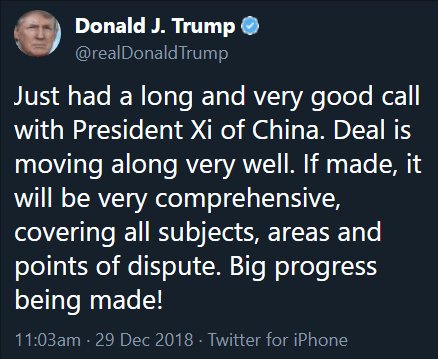 Meanwhile, ag prices are so beaten down that I don’t think there’s much downside from here; however if no trade deal is made with China I’ll likely reduce the position size.

Elsewhere among our short positions...

We continue (since late 2012) to hold a short position in the Japanese yen via the Proshares UltraShort Yen ETF (ticker: YCS) as Japan continues to print 6% of its monetary base per year after nearly quadrupling that base since early 2013. In fact, of the world’s three largest central banks (the Fed, ECB and BOJ), the BOJ is now the only one not on a path to tightening. One result of this insane policy (in 2018 the BOJ bought approximately 67% of JGB issuance and in 2019 anticipates buying 70%!) is there are days when no 10-year JGBs trade in the cash market! The BOJ’s balance sheet is now larger than the entire Japanese economy-- it owns approximately 44% of all government debt and over 75% (!) of the country’s ETFs by market value:

Just the interest on Japan’s debt consumes 9.2% of its 2018 budget despite the fact that it pays a blended rate of less than 1%. What happens when Japan gets the 2% inflation it’s looking for and those rates average, say, 3%? Interest on the debt alone would consume over 27% of the budget and Japan would have to default! But on the way to that 3% rate the BOJ will try to cap those rates by printing increasingly larger amounts of money to buy more of that debt, thereby sending the yen into its death spiral.

We continue to hold a short position in the Vanguard Total International Bond ETF (ticker: BNDX), comprised of dollar-hedged non-US investment grade debt (over 80% government) with a ridiculously low “SEC yield” of 1.04% at an average effective maturity of 9.3 years. As I’ve written since putting on this position in July 2016, I believe this ETF is a great way to short what may be the biggest asset bubble in history, as with Eurozone inflation now printing just under 2% annually these are long-term bonds with significantly negative real yields. In October the ECB reduced its bond buying program from €30 billion/month to €15 billion and has now eliminated it completely, thereby removing the biggest source of support for those bonds’ bubble prices. Currently the net borrow cost for BNDX provides us with a positive rebate of approximately 1.5% a year (more than covering the yield we pay out) and as I see around 5% potential downside to this position (vs. our basis, plus the cost of carry) vs. at least 20% (unlevered) upside, I think it’s a terrific place to sit and wait for the inevitable denouement.