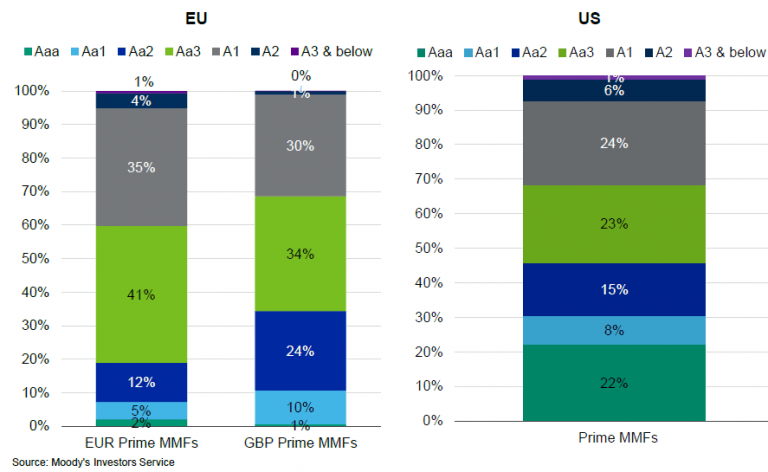 Money market funds (MMFs) have soared to heights not seen in nine years as investors continue to pull capital from equity and bond funds and pour it into MMFs. It’s still early in the year, but early numbers suggest Moody’s outlook for MMFs in 2019 could end up being rather conservative.

Data from another source, Investment Company Institute (ICI), indicated that U.S. money market funds enjoyed nine consecutive weeks of inflows through Jan. 2, so adding the week ending Jan. 8 means MMFs have enjoyed 10 straight weeks of inflows. The Financial Times added that the nine-week streak of inflows was the longest since October 2008 when the financial crisis was in full swing and the U.S. Treasury enacted emergency procedures to protect MMF investors from losses.

Moody’s Investors Service said in its 2019 global outlook for money market funds in November that conditions look stable. According to the firm, “benign” credit conditions and improving bank credit should support money market funds, as should new regulations in Europe designed to make them more resilient to shocks in the market.

Other factors which contributed to Moody’s stable outlook include rising short-term rates, which make cash look more attractive as an asset and “healthier asset supply conditions,” which the firm said should enable funds to be more flexible.

The firm added that high-than-expected growth in assets under management across the industry could be a positive for money market funds, as could strong improvements in credit conditions and a lack of disruption from Brexit and the implementation of the EU fund reforms. On the other hand, one of the negative factors for money market funds was large outflows as MMFs “become less competitive against alternative products.”

The Financial Times credited the increased flows to money market funds to the recent flight to safer assets and higher yields from MMFs. The Federal Reserve raised interest rates four times in 2018, which pushed short-dated rates higher, increasing the returns on safer assets in the process. Moody’s didn’t highlight either of these two factors in its outlook, so money market funds may continue their run for the foreseeable future.

One thing Moody’s did point out was that the credit quality of prime MMF portfolios has been high, both in the U.S. and Europe.

Their credit quality has been helped by the improving credit profiles of banks, which money market funds typically have higher credit exposures to. Moody’s describes bank rating outlooks as “mostly stable.”

The firm also highlighted the new EU rules for money market funds, which go into effect on Jan. 21 for most funds. The new regulations are designed to improve the liquidity and diversification of European MMFs.

U.S. lawmakers are attempting to go the other way on MMFs by rolling back the reforms introduced in 2016, but Moody’s doesn’t expect it to become law.

The firm did specifically mention U.S. prime money market funds as being attractively positioned. Prime funds had about $529 billion in assets under management as of November, and Moody’s said these funds are growing faster than government funds, which had about $2.2 trillion in assets under management. The firm explained that new flows would be looking for higher yields, which does track with what other data sources have found early this year.

Moody’s predicts that prime funds will capture more and more money as yield spreads rise. However, the firm also warned that if the spread narrows, prime funds would become less attractive because they are more exposed to credit risk.

The firm expects MMF assets in the European Union to remain stable at around €1.3 trillion despite the new regulations. Moody’s also looks for most of the €625 billion in prime fund assets to transition to the new LVNAV fund structure at some point this month.