ValueWalk
Home Business Guides Work Below Freezing: The 12 Coldest Jobs In The World 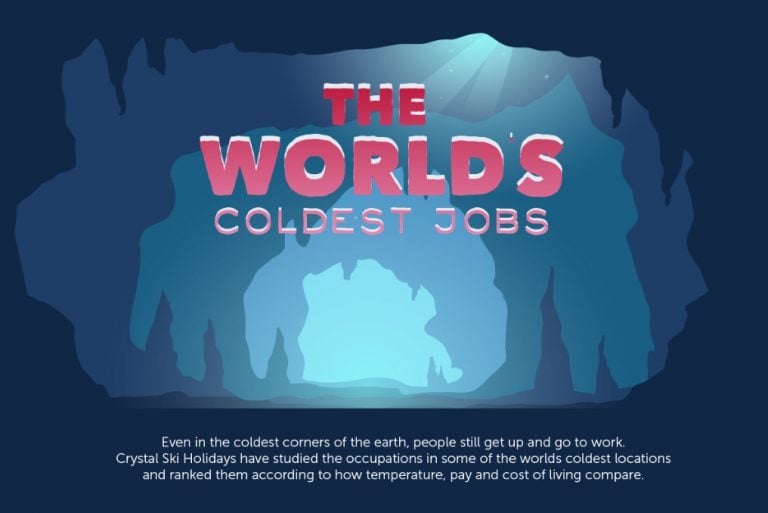 According to experts, frostbite can occur on skin exposed to temperatures of -28°C and below in just 30 minutes or less. Even those living in the coldest corners of the planet have jobs outdoors. This can mean working in temperatures as low as -39°C. Meet the people bracing the cold by working in these temperatures, from the Ice Truckers of America to the Ski Instructors in Europe’s award-winning slopes, and discover the careers that are based firmly below freezing.

A new study uncovers the 12 coldest careers that require workers to withstand an average temperature of -26°C during their shift. It suggests that working below freezing can pay off with 58% of the salaries paying above the average amount in the area, with some earning a staggering $69,900. If you don’t mind the cold, it may be time to change career and location.

Crystal Ski has searched the globe and discovered where you can find the coldest occupations. The engaging graphic also includes the average temperatures work is conducted in, the cost of renting in the area and their salaries. From Gold Miners to Outdoor Instructors, here’s where you can find the jobs that require staff to work in painfully low temperatures between -2°C and -39°C.

Top 5 Locations for Coldest Jobs in the World:

The coldest job studied was found in Russia. Gold Mining Chief Technologists in Verkhoyansk and Yakutsk work in temperatures that average at a numbing -39°C. As mentioned, frostbite can occur on skin exposed to temperatures of -28°C but is this job worth the risk?

Yakutsk has the lowest winter temperatures of any city in the world and these Gold Mining specialists have a healthy salary of $57,108.

Surprisingly, although you’d expect the coldest job to come with the highest salary, this can be found in America in 13°C warmer conditions.

Head to Canada if you are looking for a career in the cold as 40% of the world’s coldest jobs can be found here. Here you will find a variety of jobs from a Ski Instructor in -11°C, to a Truck Driver in Winnipeg, -16°C.

However, Mining Officers in Fort Selkirk, Yukon nab the spot in second place and work in bitterly cold -27°C temperatures and earn $50,000 a year. Yukon is also home to the fifth coldest job, Mill Helpers in Snag, who work in conditions below -24.5°C and earn $21,490.

Truck Drivers in Winnipeg, Manitoba earn on average $63,700, the second highest salary of those studied in -16°C temperatures. They receive a salary 45 percent higher than the same job in the area.

The cost of living in this climate is also a factor to consider as although seasonal Ski Instructors in Mont-Tremblant earn $23,573, they have to allocate one of the highest percentages of their income to rent, spending on average 39 percent of their salaries on this.

Avoid China if you’re looking to profit from working in cold conditions as Engine Installation Engineers in Heilongjiang, although placed at number three, earn $51,501 less than the Hazmat Specialists in Barrow, Alaska who work in the same temperature of -26°C. A huge difference for these careers in the cold.

These engineers work the longest hours of those studied, exposing themselves to -26°C degrees for 50 hours during a typical week.

To make matters worse, they also earn almost 80 percent less than other engineers across China.

If you’re hoping for a pay rise in 2019, it might be worth heading to the United States for a career in the cold. Hazmat Specialists in Barrow, Alaska earn $68,904 at -26°C, a considerable 49.65 percent more than the country’s average salary and $11,796 more than the coldest career.

Package Delivery Drivers also profit from the cold conditions as those based in Fraser, Colorado earn $39,672 per year, a pay packet 30% higher than the average while working at -10°C.

But this comes with a catch… they also spend the highest percentage of their salary on renting, a total of 44 percent on average.

The fifth country, Greenland is home to Airport Terminal Workers, who spend their 9 to 5 in an average temperature of -17°C.

Earning $24,960 a year and over 15 percent less than the average in the area, it is debatable whether this role is worth enduring the minus temperatures.

With the 12 salaries averaging at $40,824.58, would you work below freezing? These countries host the coldest jobs in the world, to view the study in full, click here.