The Global Value strategy composite returned -17.10% gross (-17.34% net) for Q4. Despite the decrease in market price, we believe the underlying values of our individual portfolio businesses have continued to grow this year. This quarter experienced a sharp increase in market volatility leading some to question if the almost 10-year long bull market has come to an end. This past December was the worst December in the US stock market since 1931 and yet it also included the largest ever one-day point gain in the Dow Jones Industrial Average.

Much of this volatility is due to the uncertainty of future Fed actions. The Federal Reserve has guided that 2019 will have two 25-basis point rate increases and $600 billion of treasuries removed from their balance sheet. However, this appears to be very aggressive in light of recent equity and bond market declines. Interest rate futures are pricing in that rate increases are unlikely in 2019. Part of the issue here is that the Fed bases decisions on US economic data, but their actions have huge impacts on the global economy. The amount of foreign debt priced in dollars has increased dramatically in recent years. The strengthening of the dollar relative to other currencies over the past two years was a major factor in this year’s rout of emerging market stocks. While historically a strong dollar would make emerging market exports more competitive relative to American competitors, the growing popularity of EM dollar-denominated debt causes a rising dollar to increase companies’ liabilities while their local currency assets remain stable, making the companies less solvent and reducing net equity values. Trade war concerns were also a significant factor to emerging market investments.

While our US stocks outperformed the overall US market, we were dragged down by international holdings as 2018 saw a large international selloff. This flow of capital has not been due to deterioration of the current fundamentals of our portfolio companies, but rather due to foreign capital flight. In Japan, according to survey data released by the Tokyo Stock Exchange1, foreign investors pulled out ¥5.7 trillion ($53 billion USD) from the public equity markets. This is a larger capital flight from the Japanese stock market than any year since the collapsing of Japan’s asset bubble in 1987. The effect of this appears to have been more magnified for microcaps and small caps than for the overall Japanese equity market (all of our Japanese stocks have market caps under $1B USD and most under $100M USD). Investors appear to have already priced in a recession that is yet to occur, and the Nikkei 225 is trading at price-to-book multiples it has not seen since 2012. Our European investments in Germany and Russia have also been hit by a significant decline. Much of these declines in foreign markets may be due to concerns over trade disputes involving the US and also Brexit negotiations. I will provide an update on our largest two foreign positions, Sberbank of Russia and Joban Kaihatsu, further below.

It seems far from certain that we will be eminently entering a recession as there are mixed indicators in each direction. US unemployment remains at fairly low levels, and high job growth has continued with the labor participation rate increasing. Corporate earnings in the US are hitting record highs. The University of Michigan's study of consumer sentiment for the US recorded a higher result for 2018 than any year since 2000.

On the negative side, consumer spending declined slightly in Japan in the 3rd quarter. Industrial output growth in the eurozone has slowed down. In December 2018, there was not a single issuance of a high yield corporate bond in the US (the last time this happened was in 2008-2009 financial crisis). It is also noteworthy that the US is engaging in heavy deficit spending late in the business cycle. Combined with the balance sheet reduction policies of the federal reserve, it is unclear how global credit markets will react to so much US government debt being dumped on them. Currently, there is a great inversion in the yield of international treasuries relative to the US overnight fed funds rate, with the 2.4% federal funds rate being greater than the 10-year bond yields of almost all developed economies.

While we need to remain cognizant of global economic forces that could affect our portfolio businesses, our strategy for portfolio construction remains a bottom-up process. A collection of well-managed businesses with a competitive edge that are trading at bargain valuations will do well over the long-term regardless of macroeconomic factors. These recent drawdowns and the underperformance of the value factor in stocks are a necessary component of what makes value investing as a strategy work well over time. If value investing provided great returns in every environment, there would be a crowding effect of the strategy and its outperformance would disappear. 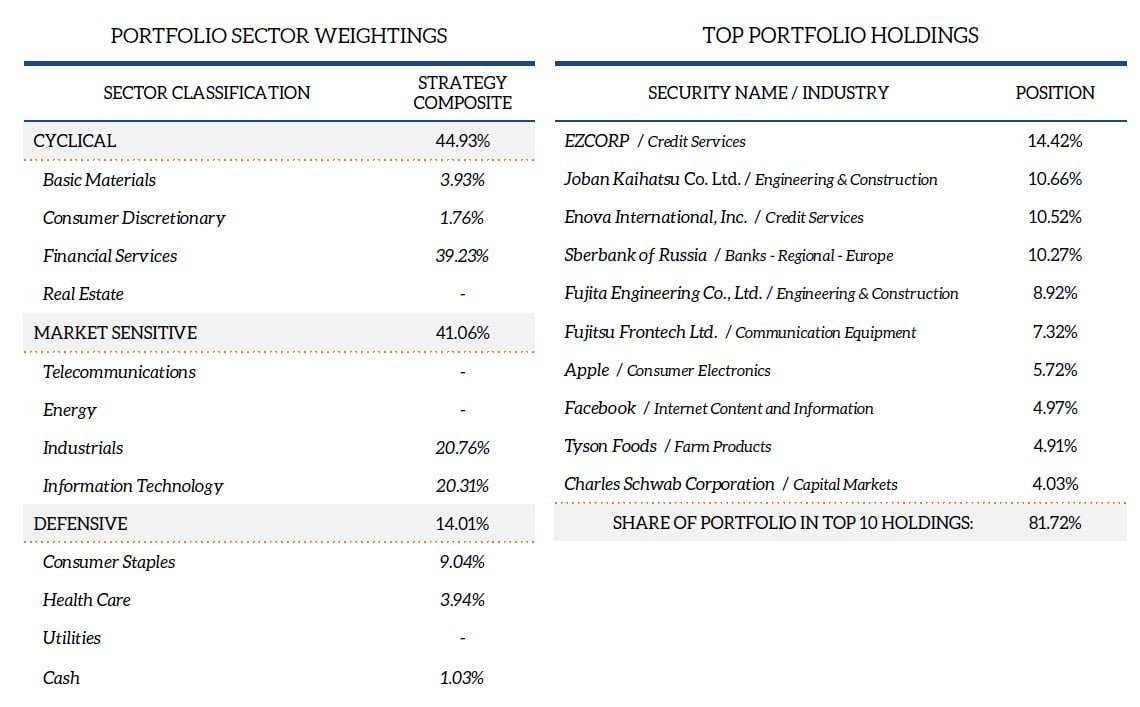 Sberbank has posted their highest ever per share earnings in their public history and next year is expected to be even better. Introduction of improved technology and increasing efficiencies have allowed Sberbank to increase their revenues while reducing expenses and headcount. As part of a recent government policy that encourages state-owned corporations in Russia to target a dividend payout ratio of 0.50 if their liquidity needs allow it, Sberbank has been increasing their dividends. Their dividends payout is tempered by the additional goal of targeting a Tier 1 capital ratio2 of 12.5% (current ratio is 11.9%). In 2019, the Russian Finance Ministry expects Sberbank’s total dividends to increase 55% from their 2018 level to a total of 420 billion rubles ($6.28 billion USD)3. This translates to 19.5 rubles per share, a yield of 9.9% based on the January 11th closing price. The bank’s return on equity has grown to an impressive 23.3%. Despite these excellent results, the company’s stock declined 17.3% and the ruble declined 17.1% against the dollar for an ADR return of -36% in 2018. 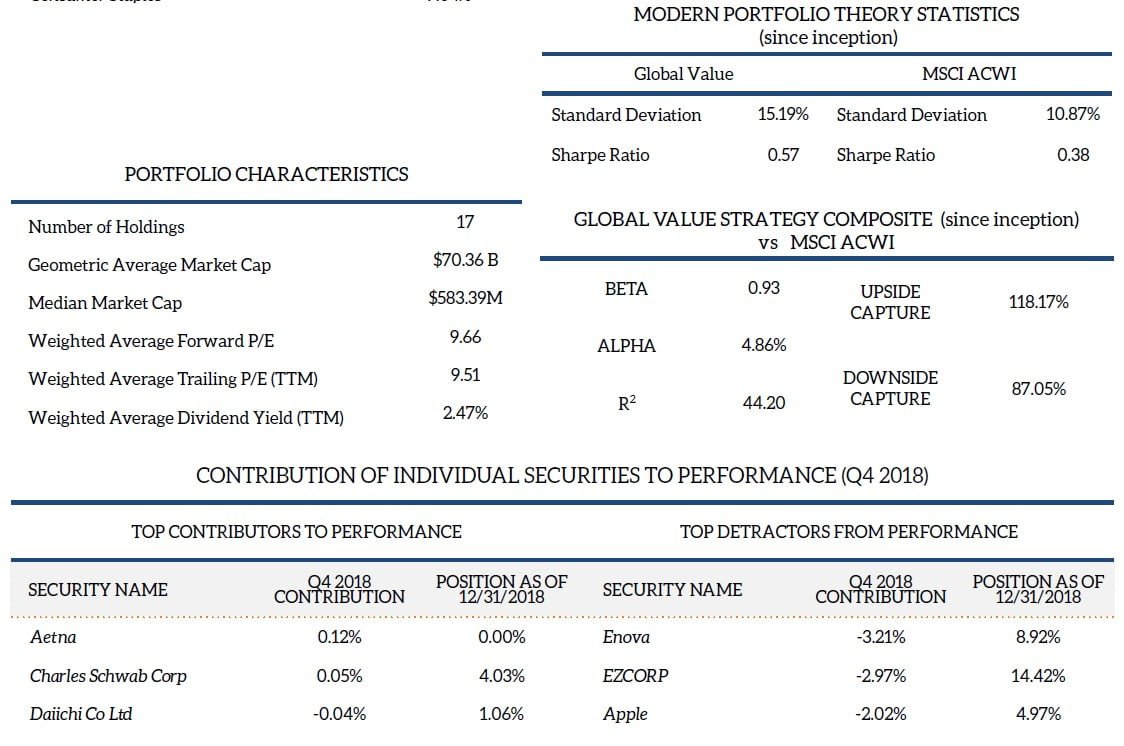 Japanese stocks were cheap before and have become even cheaper after recent declines. Construction demand appears to be weakening in Northern Japan, but remains robust in the rest of the country. However, Japanese Prime Minister Shinzo Abe is planning additional infrastructure spending as a form of stimulus4. This would be especially helpful for Joban Kaihatsu as the declining levels of government reconstruction work in northern Japan have led to a gradual decline in the company’s backlog of construction projects.

In the early twentieth century, Ben Graham, considered by many to be the father of value investing, built his career on investing in “net-nets” which were stocks where the share price is lower than the current assets of the business reduced by total liabilities. Buying these stocks at such a low price would allow investors to have a profit if the business were to be shut down and liquidated. These investments were sometimes called “cigar butt” investments as they were seen as a discarded, failed business that still had some value to extract in much the same way that a discarded cigar may have a few puffs of tobacco left. Over time, as corporate governance standards have improved and value investing methods have been popularized, the population of net-nets has almost disappeared. I bring up the subject of net-nets because for six trading days in December an amazing thing happened with Joban Kaihatsu. The company’s stock traded at a discount to their net cash position (roughly ¥4970/share) giving it a negative enterprise value. While such occurrences are already quite rare for businesses in general, they usually occur in failed cigar butts where poor management makes extracting the cash value difficult. It is very rare to see this occur in a company like Joban Kaihatsu, a highly profitable business with returns of equity in the high-teens that pays a significant dividend. Over the next two quarters, we expect the company to generate earnings totaling between ¥900-1300 per share.

With an EV/EBIT of 0.1 and in consideration of the other characteristics of the business, we believe that Joban Kaihatsu remains one of the cheapest stocks in the world.

This quarter we exited our positions in Express Scripts, Aetna, and Credit Acceptance. Aetna and Express Scripts were both acquired after their mergers were approved by regulators as we predicted earlier this year. For Credit Acceptance (CACC), our sale was due to signs that the company was becoming more aggressive with their underwriting as can be seen in the declining forecasted collection rates, and due to the increasing valuation (CACC has more than doubled from when we added it to the Global Value composite in Q2 2017). A lender becoming more aggressive late in the business cycle is a risky move. We still believe the company has a quality, differentiated business model and may buy it again if the valuation becomes sufficiently attractive.

As we discussed in our last letter, we made the decision to use the MSCI All-Cap World Index as the benchmark for performance comparisons going forward. Using a US equity benchmark when slightly over half of our investments are overseas was not ideal.

Thank you for your continued trust and please let me know if you have any questions or concerns.