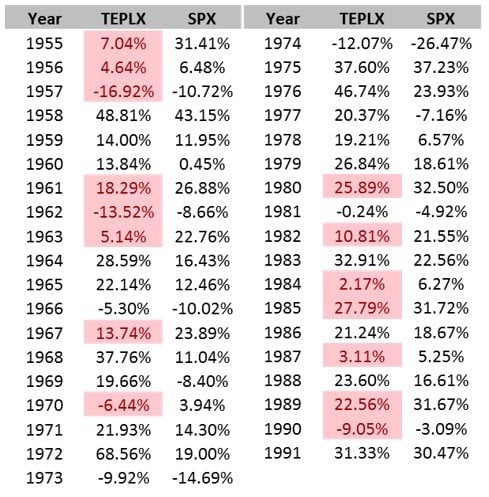 In preparation for a talk, I began to review Sir John Templeton’s track record with the Templeton Growth Fund (TEPLX), which he managed from 1954 to 1991. At the age of 34, with a father that broke into the investment business in 1980, I was very aware of Templeton’s success in his career, but unaware of how the results came to his clients. What you walk away with after reviewing his track record is the knowledge that very few people in our industry (particularly academics) are conscious of what it took to produce that success. After Templeton, we also reviewed Sequoia Fund (SEQUX) from inception to date. We walked away thinking that the ride that the investors had with these vehicles wasn’t the most important part of the experience, it was the results. Academia says otherwise. We will unpack this.

Sir John Templeton began managing the Templeton Growth Fund in 1954. He produced a prodigious amount of success during his tenure at the helm of the Fund. What was important was the results he produced. It became evident as we reviewed his results that the tracking error, or volatility of the results relative to the benchmark, were not an important factor to focus on. To the right is the entire annual return series of the Templeton Growth Fund from 1955 to 1991.[1]

The investors of the Templeton Growth Fund underperformed right out of the gate during 1955-1957. He rebounded to beat the market from 1958-1960, but underperformance continued on and off during the 1960’s. After calculating the returns, Sir John Templeton didn’t outperform the market from the Fund’s inception until 1969 arrived.

One of the greatest contrarian investors of the last 100 years took 14 years to break even! Let it be said that the S&P 500 Index wasn’t a widely used index in the 1950’s or 1960’s. However, the Dow Jones Industrial Average was, and everyone was aware of the peers. People would have been watching Jerry Tsai at Fidelity Capital Fund (a hot-shot manager) at the time, as an example.

Below is growth of $10,000 for the Templeton Growth Fund using the data we provided above.[2] 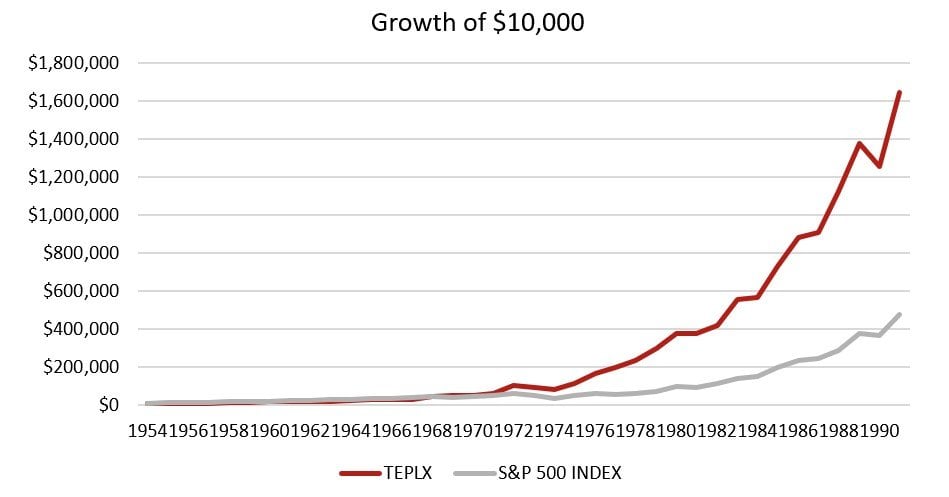 "We next consider the rule that the investor does [or should] consider expected return a desirable thing and variance of return an undesirable thing.” - Portfolio Selection by Harry Markowitz

Thanks to a book recommendation from our friend, Vitaliy Katsenelson, I read Nassim Taleb’s newest book, Skin in the Game. Taleb lays out the doers of society as the source of all great invention and creativity, while academia remains anchored in a protectionist fashion of their own intelligence. Taleb argues that academics focus their attention on winning an argument rather than winning.

Taleb’s writing sits in the heart of many parts of the economy today, especially the active vs. passive debate. Markowitz would tell us that the only reason for taking risk is that we must be compensated for it. Further, if we are taking risk with an active manager that is likely to produce more tracking error to the benchmark, we must be compensated for that extra volatility.

To bring this into our discussion, Markowitz would have been advising you that 10 years into working with Sir John Templeton, you should have fired him. Why? Markowitz and others that adhere to his folly weren’t compensated for the risk you were taking with him. Even at the point that he broke ahead of the S&P 500 in 1969, you still hadn’t been compensated for the higher level of tracking error to get the similar return to the index and that was 14 years in. Based on the psychology of investors today, you could only hope to still be employed. These are all arguments to look smart or win an argument. Templeton won, his investors won, and anyone that needed all the data to prove they would be compensated missed out.

For readers that are bothered by using the S&P 500 Index, instead of a global index like the MSCI World Index, we did this because the MSCI World didn’t incept until 1970. Remember that even today, 63% of this index is U.S. stocks. Though we don’t have the data, it’s not a bad guess to believe that U.S. stocks were an even larger outsized portion of global market indexes in 1954. Despite this, here is Templeton’s track record against the MSCI World, since 1970.[3]

This looks much better to the Markowitz crowd as it looks like you’re more highly compensated out of the gate against a better respective benchmark. However, what goes hidden in this snapshot is that Sir John Templeton’s investors underperformed this index by 35% cumulatively from 1980 to 1989. This must have been a very frustrating time for Templeton’s investors.

“Charlie and I would much rather earn a lumpy 15 percent over time than a smooth 12 percent.” – Warren Buffett

We as investors believe, as Taleb and Buffett do, that the point is to win. A 15% return is what Buffett wanted, even if it was lumpy. He didn’t say he’d take it only if his tracking error was 25% or less, or greater than the 12% return. Next week we will unpack this further through the Sequoia Fund, Buffett and the circumstances of the late 1960’s.