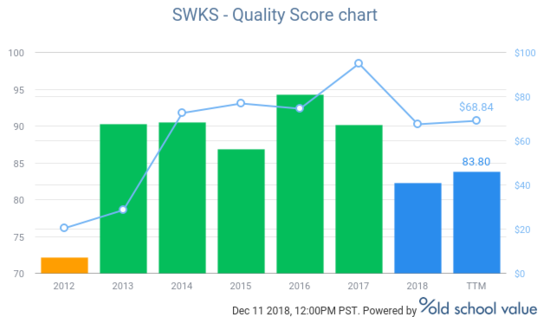 There’s an elephant in the room, so I’m just going to talk about.

The market has been pretty wild lately. The S&P has fallen 1.66% since our last weekly nuggets two weeks ago (last week was a monthly nugget), with two daily drops in excess of 2%, but that overall decline is being erased today (Tuesday) as I write this. (Of course, by the time I finished writing, the Tuesday gains had all been given back!)

I woke up to a New York Times news alert and lead story Monday, "Wall St. Ignored Signs of Trouble for Months. Now It Sees Risks Everywhere." Trade wars, the Fed, new Trump allegations, the Huawei CFO arrest, the business cycle, Oh My! If there were one piece that tried to pull in as many narratives as possible to explain the recent volatility, this was it. (I linked to it, but I don't actually recommend reading it.)

These factors may or may not be causal, so when journalists start doing this, I call it "Story Time." Actually, I got this from Kaiser Fung, a data scientist. It's when people shift from an evidence-based examination of facts to a speculative explanation. It's human nature to want to understand things, but we have to be careful about how we extrapolate from data.

Listen, I'm not denying that Trump's comments casting doubt on having reached a China trade deal probably caused at least one of the bad days. But let's not work ourselves into a lather by overly reading into the news cycle and convincing ourselves the market is set for a tumble. Or a rally. Or whatever. The market will do what it will, and we fundamental investors will do what we do: find great companies at great values.
Prices are off their highs, and for some companies, by a lot (NFLX and AAPL, I'm looking at you). There are great buys in this market. (Not necessarily these two, of course.) The market is still overall expensive, though, so don't buy just anything.

Will there be better buys next week, next month, or next year? Maybe, maybe not. I don't time the market. I learned that the hard way. I am in it for the long run. I know that the kinds of companies I buy will fall less than the market in a drop, and will rebound faster and farther in a rally, and I have time to let that play out. It may be time to change the priority with which you look at different sectors, however; I'm not saying don't do that. You might also re-emphasize the conservative nature of a target company's balance sheet, as well, but hopefully, that hasn't fallen to the wayside of late.

One company we've been asked about a few times in the last couple of days is Skyworks (SWKS), a manufacturer of Internet of Things (IoT) and mobile phone components. It hit the top of Gurufocus' Buffet-Munger screener this week, and is all over Seeking Alpha.

One look at its price, and you can see why:

It's off a little more than 30% from its highs earlier this year.

The business is generating solid FCF on its sales and its CROIC is above 20%. Those metrics have deteriorated of late, but this looks more like normal variance than a major problem. For being a cost-competitive supplier, its margins are pretty impressive. It's a solid B in terms of Quality:

It's beginning to look cheap, too. Its Value Score has increased quite a bit of late. Pretty much all of the key value metrics are at 5- and 10-year lows, from P/E to EV/EBIT or EBITDA. In the below chart, red just means the metric has gone down, so in this case, it means it's getting cheaper. 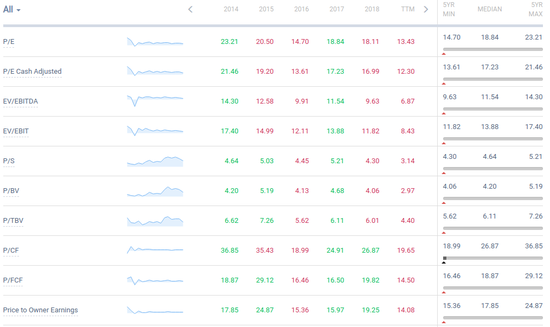 My major hang up with this company is its growth. Its 2018 fiscal year ended in September, with annual revenue growth of 5.9%. This masks the comparable quarterly growth trends, however, which were down in Q3 and only up 2.3% in Q4: 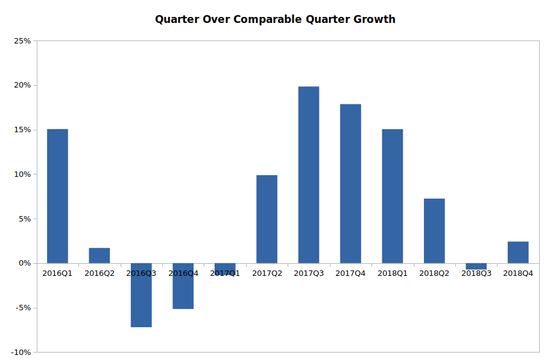 This company is partly product driven and rises and falls based on new launches and new technologies. It announced a bunch of new stuff in Q4, so maybe we're in that cyclical trough and things will go up. Will it ride the wave of 5G? Will its recently concluded acquisition of Avnera Corp, which gives it a better stronghold in some good markets, juice growth? Will the rising tide of IoT lift SWKS's boat?

At the same time, 47% of its revenue in 2018 was from Apple, which is having its own growth issues, especially with respect to units, which is what matters for SWKS. Even if you believe Apple's growth will get sparked by new services, or by price increases, SWKS will not share in either of those, as it is paid on volume. Its revenue guidance for Q1 is $1.02B, which would be a 3% decline from the 1.05B it posted 2018Q1. Its own management doesn't think its initiatives are enough to grow right now.

The problem is, we don't know. We can tell ourselves stories, but we'd be extrapolating beyond what the data tell us. We can see the fundamentals eroding, and we can tell stories about why that will or will not continue, but I think for now we should take the current situation at face value.

So, what is a fair FCF/Owner Earnings growth? Well, over the last few years, its top-line growth has averaged around 6%. It was higher before, but I don't know that things can go back to that. Prices have declined, likely due to increased competition, and that's not going away. The new products may help combat that, but its competitors aren't standing still. SWKS's earnings, FCF, and Owner Earnings have all been growing much faster, but it's hard to see how this is sustainable without more revenue growth. We can tell a story about scale, but even that has its limits.

If I plug in a moderate Owner Earnings growth rate (5%) into my DCF valuation, with a healthy discount rate due to the uncertainty (12%), SWKS's price is right at its fair value. 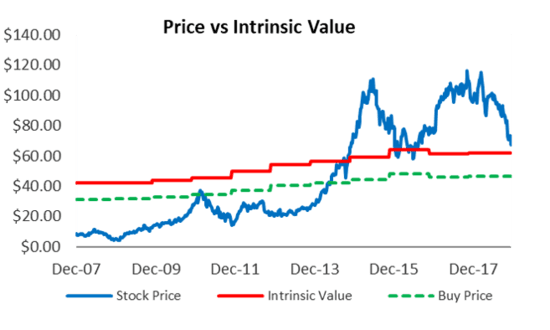 But, it wouldn't take much to make this look good if you believed in higher future growth.

One other factor that is worth emphasizing is that this company has a solid balance sheet. No debt, strong quick and current ratios, and as mentioned before, strong cash flow generation. This is a company that will be able to weather a few storms.

So, what does this mean? Well, it really depends on whether you want to tell yourself stories about the future growth of IoT, 5G, and SWKS's competitive position within these obviously-growing markets. Or as an acquisition target within semiconductors, which is about as hot for M&A as it gets. I don't have specific insight or expertise here, so I'm not willing to prognosticate. I would call this more of a growth play that's currently at a good value if you have a long enough timeframe and are willing to go to Story Time.

There are a lot of other better-valued companies out there right now with less uncertainty. But if you want a piece of tech action, this might not be a bad place to play.

(And, as you might expect, there are a lot of people that are pretty positive on SWKS if you search Seeking Alpha. I encourage you to read people making the case for the stock. Just ask yourself, are they speculating or drawing sound conclusions from the facts?)

Disclosure: I hold no position in SWKS.

What We're Reading in the Media