ValueWalk
Home Info-Graphs The Most Popular Women In Cryptocurrency 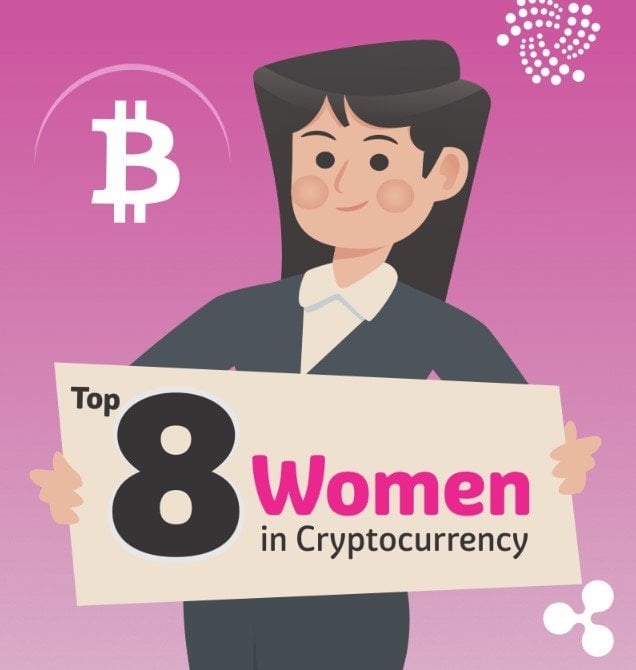 A cryptocurrency is nothing but a digital asset that is used to work as a medium of exchange which makes use of a very strong cryptography to secure financial transactions, verifying the transfer of assets and to control the creation of additional units. It is a kind of digital currency and a currency that is alternative. They use a technique known as decentralized control instead of centralized currency and banking systems that are central.

The cryptocurrencies’ decentralized control actually works through some thing known as a distributed ledger technology, which is nothing but a blockchain, which serves as a database of a transaction of public database.

It all started in the year 1983, by an American cryptographer called David. He introduced an anonymous currency called ecash that was nothing but electronic money. In the year 1995 he invented the Digicash, that was an early form of electronic payments that were cryptographic. They needed a user software to withdraw notes from a bank. And to designate very specific encrypted keys much before it can be sent to some recipient. However by this process, the digital currency could not be made traceable by the bank that issues it, or some third party or the govt. The NSA in 1996, published a technical paper that read “How to make a Mint”, that describes a system that was cryptocurrency by first publishing the article in an MIT mailing list. Then later it was published in 1997, called The American Law Review. During the year 1998, “b-money” was published by Wei Dai, that was anonymous and electronic cash systems were distributed. After that bit Gold was described by one Mr. Nick Szabo. Just as the other cryptocurrencies that followed, this particular bit gold, was a currency system that was electronic that needed the users to complete a proof of some work function, for which the solutions were cryptographically aligned together and later published. Bitcoin, the first decentralized cryptocurrency was invented in the year 2009, by an individual called Satoshi Nakamoto.

In April 2011, the Namecoin was invented to form a decentralized DNS that could make the censorship of internet quite tough. After this attempt, the Litecoin was created during the year Oct 2011. Then another cryptocurrency, called Peercoin, was used as a proof of work.

As per Mr. Lansky Jan, if a system meets the following six conditions then it can be termed as a cryptocurrency.

This term has many definitions. Yang of The Wall Street Journal, putforth the definition of this word as “Alternative Digital Currencies”, whereas Paul of Wall Street Journal says that altcoins are Bitcoins’ alternative versions. And lastly Aaron of Market Watch, defines the word Altcoins as any cryptocurrencies other than bitcoins.

Any Blockchain account is capable of providing functions other than allowing payments. Here the coins or units are referred as cryptotokens.

This cryptocurrency that is decentralized is made by the whole cryptocurrency system at a rate that is defined at the time when the system is created. In economic systems and banking that is centralized, governments or corporate boards regulate the supply of currency by demanding additions to ledgers that are digital banking. The technical systems that forms the base for cryptocurrencies which are decentralized was created by Satoshi Nakamoto.

The blockchain provides each cryptocurrencies’ validity. The word blockchain means a continuous list of records that are growing (called as blocks) that are secured and linked by Cryptography. In a block there are transaction data, a time stamp and a hash pointer. These so called blockchains are immune to data modifications.

The word mining is, a transactions validation, in cryptocurrency networks. Successful miners get cryptocurrency that is new as a form of reward. The hashes generation, that can validate any transaction, is increased by special machines like ASICs and FPGAs, that run very complex algorithms such as Scrypt and SHA-256.

Since the day the very first cryptocurrency (bitcoin) was created in the year 2009, the arms race for an efficient and also cheaper systems is steadily increasing. More and more people are foraying into the world of currency that is virtual. And miners are investing huge sums of money for using ASICs that are efficient and which are high on performance. Due to this the total currency which is obtained cannot justify the exact amount that is spent on electricity which is needed to run them, not to mention the cooling facilities to cool the heat that they emanate and the cost involved in setting up the systems.

When the cryptocurrency mining increased then the demand for graphics cards also increased. The cryptocurrency’s miners like RX 580 GPUs, AMD RX 570, GTX 1070 graphics cards and Nvidia’s GTX 1060 tripled or doubled in price and most of the time were not in stock. Miners mostly buy the complete stock of the GPUs that are new as and when they are available.

These Cryptocurrencies are generally compared with economic bubbles, pyramid schemes and Ponzi schemes. Howard Marks stated in the year 2017 that these digital currencies were “a baseless fad and it is based on ascribing value to something which has none beyond what the common people will pay for it.”

In the year 2015, peer reviewed journal that was academic was announced. It broadly covered how cryptographic currencies and some other technologies could be studied. This particular Journal makes the authors to sign digitally a file hash of papers which are submitted. These will then be time stamped in the blockchain of Bitcoin. The authors are asked to mention a very personal bitcoin address, in the very first page of their technical papers.

Checkout the following infographic on Top 8 Women In Cryptocurrency, this infographic was developed by MrBtc.org. This is all about the Crypto women and their contribution to this industry.