Food and drinks giant Nestle defended its corporate governance practices after Third Point Partners criticized CEO Mark Schnieder for his collaboration with Chairman Paul Bulcke, who was CEO eight years through 2016. Schneider, who is the first outsider to work in the role since 1922, said the company had been well-served by its approach to corporate governance. Bulcke, who previously faced heat from Third Point in its July 2018 presentation, said he gave Schneider enough space to work independently, noting the decision to sell the company’s skin health unit, a business acquired during his tenure, as proof that he was not interested in protecting his legacy.

Third Point Partners criticized Bulcke for sticking to the status quo in the presentation and blamed Nestle’s declining share price on the chairman. The activist not only reiterated its call for speedier divestments, more focus, and the sale of a giant $27 billion stake in L’Oreal, it also swiped at the executive board, saying it lacks “fresh perspectives” and had been unchanged since Schneider joined in 2016. Third Point recently said, however, that it has no present plan to oppose the election of Bulcke at the April 2019 meeting.

Block’s presentation focused on shorting for moral reasons, but he did not use any of his bets as an example. Instead, he blamed Purdue Pharmaceuticals, an opioid manufacturer, for its role in a crisis that caused more American deaths than the Vietnam War. The media treats scandals as one-off events, he said, but capital markets inadvertently enable bad behavior.

Viceroy Research and Bodenholm Capital both presented on Ebix, highlighting accounting issues, dodgy acquisitions and a golden parachute for its CEO as reasons for not believing the bull case. The company has previously been targeted by two short sellers and the stock is down 41% year-to-date.

Quintessential's pitch was Aphria, a Canadian cannabis company, which it bet against following a C$700 million acquisition spree. Grego said Aphria funnels money from retail investors to insiders; Hindenburg in March warned against its acquisition of Nuuvera, alleging insider trading. Quintessential's thesis centered on Andy DeFrancesco, a special adviser to Aphria, chief investment officer of its acquisition vehicle Scythian Biosciences, and associate of Barry Honig. Writing on Twitter, DeFrancesco lashed out at short sellers, saying "attacks by guys having something to gain from stocks going down are as genuine as a stripper telling a guy with a bag full $100’s she loves him." The company said it planned to sue Quintessential for defamation.

The number of global basic material companies publicly subjected to board-related activist demands between January 1 and November 30 in respective years. 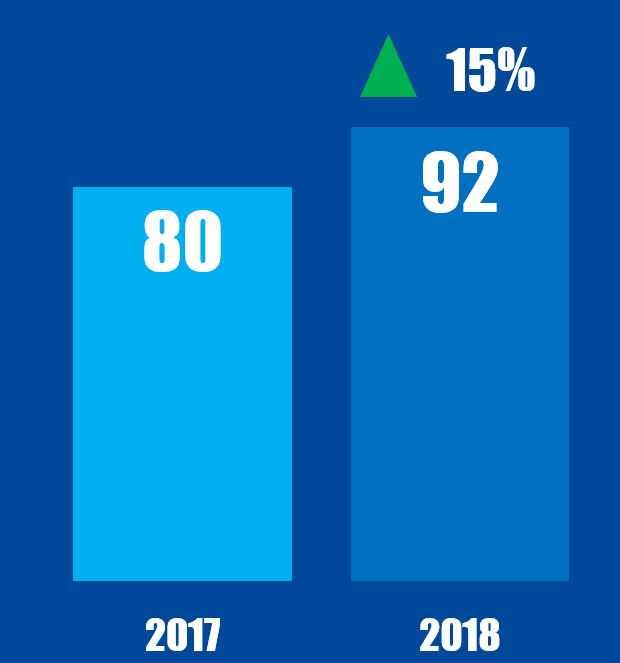