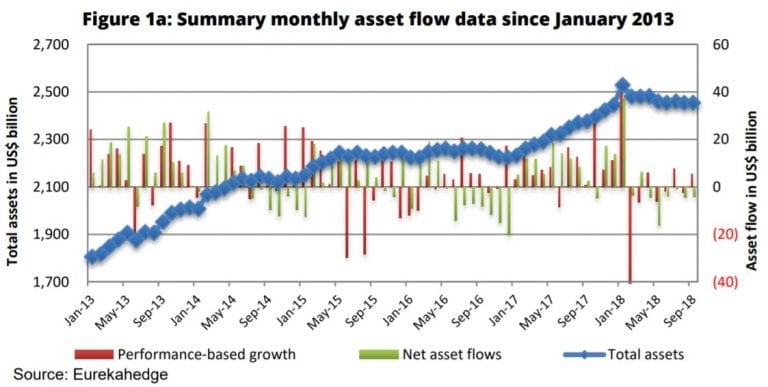 Hedge funds did a bit better last month in terms of performance-based gains, but unfortunately investor outflows continued, according to data from Eurekahedge. Overall the Eurekahedge Hedge Fund Index was in the red for September while the broader world market was in the green.

Preliminary data indicates the index declined 0.06% in September, while the MSCI World Index was up 0.07% for the month. Hedge funds with a focus on Asia continued to struggle while U.S. funds continued to recover. Funds focused on Greater China struggled the most as the trade war between the U.S. and China continued.

After combining the September and August numbers, Eurekahedge pegs assets under management in the world's hedge fund industry at $2.45 trillion.

According to data from Eurekahedge, the first nine months of 2018 have made it the worst year since 2011. Hedge funds are up 0.26% year to date through September. The only year they recorded a worst performance was in 2011, when they were down 2.96% for the first nine months of the year. This year less than half of hedge fund managers are in the green year to date, and just 11% of them have recorded double-digit growth, according to Eurekahedge.

Asset growth across the global hedge fund industry has been exceptionally weak this year, thanks to performance-driven losses and lackluster investor allocations. Eurekahedge reports that total assets under management are up only $8 billion for the first nine months of the year, compared to the $150.7 billion increase recorded in the first nine months of last year.

Redemptions have been steep this year, with investors pulling $31.4 billion from hedge funds between February and September.

Of all the main hedge fund strategies, CTAs/ managed futures funds are down the most. They shed $21.3 billion in assets under management just in the first eight months of the year. When it comes to redemptions, however, multi-strategy hedge funds have been hit the hardest with investors pulling $19.4 billion in assets from them this year.

Macro hedge funds were on top in September, but long/ short reigns supreme

Even though the long/ short equities strategy struggled in September, so far it has been the best-performing hedge fund strategy on a year-to-date basis. Long/ short equities funds have racked up $18.8 billion in performance-based gains, according to Eurekahedge, putting them in first place for the year.